It was established in 2003 under the Cooperative Research Centres (CRC) Program. The CRC Program is an Australian Government initiative. The Bushfire CRC is no longer receiving Commonwealth funding and is no longer a part of or associated with the CRC Program.

The Bushfire CRC conducted research into the social, environmental and economic impacts of bushfires.

After an initial grant through the Australian Government’s CRC program in 2003 combined with substantial partner resources, the Bushfire CRC was funded to the end of June 2014 to address key issues raised by major fires.

The Bushfire CRC was made up of all the fire and land management agencies in Australia and New Zealand, CSIRO, the Bureau of Meteorology, the Attorney General's Department and several other fire related organisations.

In February 2013, the Prime Minister Julia Gillard announced a $47 million Bushfires and Natural Hazards CRC, that began on 1 July 2013. 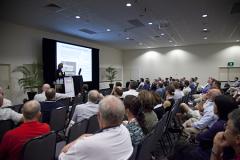 The Bushfire CRC’s mission was to enhance the management of the bushfire risk to the community in an economically and ecologically sustainable manner.

It included the following objectives:

What is a CRC?

Cooperative Research Centres (CRC) are funded through an Australian Government program to bring together researchers from universities, CSIRO and other government organisations, and private industry or public sector agencies in long-term collaborative arrangements that support research and development and education activities to achieve real outcomes of national economic and social significance.

These arrangements establish strong collaborative links between researchers and end users and others in order to create a multi-disciplinary, multi-institutional research environment focussed on addressing industry and user needs.