Operational priorities: when it’s out of control what do we do?

Can a change in strategy from attack to prioritised defence limit the losses of our worst fires?

In its Interim Report, the Bushfires Royal Commission has made it clear that the provision of warnings to communities was inadequate and this meant many civilians received little or no warning of the impending fire impact, and many of them subsequently perished in the fires.

It is not yet clear what other findings the Commission will make in relation to operational strategies on Black Saturday, particularly in relation to the priorities incident management teams (IMTs) assigned to their firefighting crews for the protection of life and property. The events of that day, and what we now know about what happened, give us all cause to stop and reassess whether our approach to fighting fires is as strategically savvy as it could be. 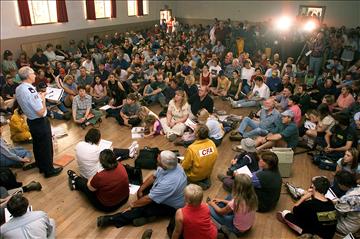 Are we doing all we can to protect people and the communities they live in? Or have we let our propensity to jump in boots and all to fight the fire cloud our judgement on what the actual priority is? The interim report from counsel assisting the Commission reinforced “the necessity to give primacy to the protection of life”. If we accept this principle, and no one would argue that we should not, it provides a focus for the strategies and objectives to be adopted by firefighters when lives are threatened. It then follows that the protection of assets not directly protecting people are of secondary importance.

While the principle of “give primacy to the protection of life” doesn’t change for different fire scenarios, the way this is achieved under different bushfire intensities does need to vary.

On days of low to moderate (and sometimes high) fire potential, fire size and/or rate of spread is moderate, the risk to human life is low and there are usually sufficient resources to defend all threatened assets as they are being threatened. On such days, resources can be deployed to defend threatened assets and to halt the spread of fire.

On days of severe to catastrophic fire potential, when fire spread cannot be stopped and there are insufficient resources to defend all assets that need defending, resources should be deployed to address a set of defined priorities.

1. The primary priority of fire agencies should be to gather, analyse and disseminate information to warn communities of approaching danger. Intelligence needs to be gathered on the predicted fire location, direction and rate of spread, and timely warnings issued to those threatened by fire. The role and staffing of the information unit of the IMT will need to be reviewed and strengthened, so that the focus is not solely on collecting information for operational purposes.

How these warnings are to be delivered to people needs to be considered. Increasingly, use of the internet to inform both the media and the general public is gaining acceptance and the speed at which warnings can be delivered can be increased if IMTs can upload information directly to websites and out through other formats.

However given that we know internet traffic can cause websites to fail on busy days, the mobile phone network can be compromised and radio communications can be overwhelmed, alternative ways of getting warnings to the public need to be developed.

Warnings need to be consistent with the national position on bushfire community safety, which will change to reflect new fire danger indices of severe (50-75), extreme (75-100) and catastrophic (>100). Particularly given that for an index above 100, people will be encouraged to leave their homes for safer places, rather than encouraged to stay and defend them. 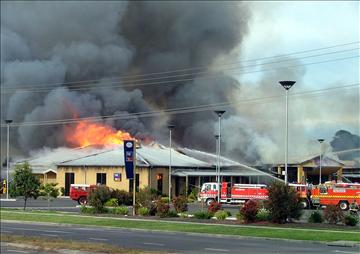 2. The second priority should be the protection of vulnerable people who may be gathered in schools, nursing homes, community shelters and the like. This necessitates the identification and assessment before the fire season of sites in the community likely to be housing or sheltering vulnerable people, and the assignment of crews to focus on the protection of these sites and their occupants if fires threaten.

Making community refuges known to the public before the fire season will be a priority. These refuges should be used by those who plan to leave and have left it too late to leave safely for more distant places, for the significant numbers who ‘wait and see’ and subsequently flee at the last minute, and for those who plan to stay and realise that they are underprepared.

3. The third priority should be the protection of key community assets that have been identified as such by the community. These may include flagship industries or businesses, on which the community relies, shopping centres, schools, hospitals, power facilities, churches, historic buildings, the local pub and other significant places. Protecting these assets improves community resilience as it enables communities to recover more quickly from bushfires as the major infrastructure is still intact. It necessitates the identification of assets that particular community’s value, mitigation of their vulnerability, and the assignment of crews to protect them when fires threaten.

4. The fourth priority should be to stop the spread of fire in built-up areas through building-to-building ignitions. Options to enable this to be done rapidly should be explored so that resources are not tied up for extended periods at individual homes or buildings. The protection of homes in built-up areas should result in fewer losses than seeking to protect the same number of homes scattered over the landscape, and therefore should be a higher priority for firefighters.

5. The fifth: defend ‘homes defendable by firefighters’ particularly in areas of moderate to high housing density, where firefighting resources can move relatively quickly between homes and other assets under threat. Firefighters should not defend homes that cannot be defended safely, or homes that can be defended safely by civilians who are present. Use of a triage system to assess house defendability before a fire can identify those that firefighters can defend. 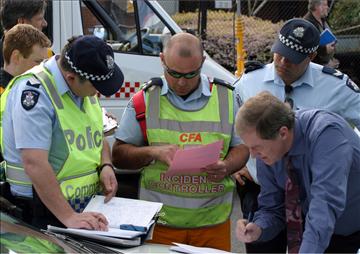 It may be possible that firefighters are available to defend widely scattered homes where residents have remained to defend homes that are undefendable or cannot be defended without firefighter assistance. However, it is hoped that these will be few, as most residents should either be well prepared and able to defend their homes without assistance, or should have responded to warnings issued earlier and relocated to safe places.

Only when the defence of higher priority assets are well resourced should firefighters be allocated to identify homes that should be defended by firefighters in accordance with triage policy. However, on days when fires are burning out of control and the focus is on protecting life and valuable community assets, protecting homes that are not sheltering people should be a low priority for firefighters.

6. The final priority should be to fight the fire, particularly for fires burning under severe to catastrophic conditions. Under these conditions, fires extinguished in the bush are likely to re-ignite, and any efforts to extinguish them are likely to be fruitless. People and highly valued assets should be protected consistent with the above priorities.

Only when conditions have moderated should attention turn to containing and extinguishing the fire.

This approach means that on days when fires are burning out of control and threatening multiple assets simultaneously, isolated homes are unlikely to be defended (even if a triage system identifies them as defendable) due to the allocation of resources to higher priorities.

The public needs to be educated about firefighters’ priorities on days of severe to catastrophic fire danger so that individual householders can make informed choices about the options they have for fires burning under these conditions. Many, particularly those on isolated properties, who are likely to stay and defend their properties on low/moderate fire danger days, are likely to leave on severe to catastrophic fire danger days if they are aware that the defence of their properties by firefighters will be a low priority.

It will be essential to ensure adequate arrangements are in place to support the provision of timely warnings.

There will be a transition from tactics employed on low/moderate fire danger days to the tactics employed on days when fires burn out of control that will need to be thought through. That is, the triggers for ‘falling back’ from offensive strategies to defensive strategies need to be identified and well understood by incident controllers, divisional commanders and sector and crew leaders. The trigger is likely to be a function of the fire danger index in a particular region, or the incapacity of firefighters to control a particular fire.

This approach to defending people and property via prioritisation should be based on one that deals in principles (rather than rules) and focusses on achieving objectives. Provided that operational personnel understand the principles and the objectives, they can continue to operate reasonably effectively even when communications break down or when fire crews are cut off and need to act independently.

An approach, based on prioritisation of tasks and assets, is not inconsistent with the current national position on community safety in bushfires. It also addresses the Commission’s criticisms that national community safety positions are ‘home-centric’. With this approach, community safety initiatives are people-centric and protection of homes and buildings is viewed through the prism of how those buildings protect people and the communities they live in.

(This article first appeared in the Summer 2009/10 issue of Fire Australia magazine.)

Operational priorities: when it’s out of control what do we do?