School-based bushfire education is one way of increasing bushfire awareness and preparedness in vulnerable communities. This research aims to develop a child focussed model of bushfire risk perception that fire agencies and educators can use to develop more effective education programs. 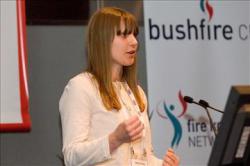 For the project 250 children aged between five and 17 were interviewed in same-age focus groups at schools across Victoria and Tasmania. To investigate the influence of the family on children’s perceptions and vice versa, approximately 70 parents were interviewed.

Whilst analysis of the interviews is ongoing, several important themes have emerged, each of which have important implications for school based bushfire education. These themes centre around two major categories:

Children focus on a variety of factors to assess the level bushfire risk for their home. The types of risk factors they identify can be divided into two main categories. The first category encompasses factors that are perceived to intensify a property’s physical exposure to bushfires. These factors include combustible materials and objects around the house such as leaves, long dry grass, woodpiles, and wooden furniture. Children as young as five identify these things as hazards that would increase the likelihood of the fire spreading to the house and exposing it to heat and flames:

M: And they’re near the house and they burn on the house

L: And the big log. It’s made out of wood and it could go across the grass to the house

Children living in wooden houses think the only way to prepare is to knock the house down and rebuild it in brick:

D: You could turn your house, instead of it being wood you can change it to be brick so that the fire can’t get in... Because it can’t burn through brick

The perception that wooden houses are not defendable is contrary to expert opinion and is problematic because it may thwart the consideration and adoption of simple and achievable measures that can be undertaken to reduce bushfire losses.

The second major category of factors can be described as features that protect a house or property from exposure to the fire front. For example roads, brick walls, rivers, and swimming pools are all perceived as providing protection because they would prevent a fire from reaching the house:

M: Well near my house like about not that far away there’s sort of a small river going past and it would probably stop there if it came from that way.

The idea that a fire will stop on the other side of a river or brick wall reflects a belief that fire only travels along the ground and, once again, a naivety of the role of ember attack in the spread of fire and the ignition of homes.

B: And what would happen if a bushfire came near this house?

D: It would burn down

S: Yeah everything around there would burn

J: But except the house because the house is made of bricks

Children’s singular focus on building materials when predicting the consequences for a house, again, reflects a naivety about how houses actually burn down in bushfires and the factors that contribute to this. They perceive bricks as providing a physical barrier that the fire will not be able to penetrate.

What is clear from this examination of children’s perceptions of risk factors is that they focus on significant, tangible, and concrete processes such as burning trees falling on houses, fires stopping at rivers, and flames burning through wooden houses. This reflects a lower level of causal thinking about bushfire consequences and serves to illustrate that education programs cannot assume that children think about bushfire risk in the same way as adults.

In responding to a bushfire emergency, children see themselves as having two main options. The first and most popular option is to get out of the house as quickly as possible and meet the family at the letterbox or the ‘meeting place’. To ensure this wasn’t a problem of semantics and that they were hearing the word ‘bushfire’, children were asked to verify whether this course of action was appropriate for a bushfire or a housefire:

K: When we see a fire we all run out to the letterbox

L: Mine’s the same that you have to go out to the letterbox

B: So are those plans for a bushfire or a housefire?

K: I would say both.

This lack of differentiation between emergency response for bushfire and housefire is pervasive amongst primary school children and might be attributed to the emphasis placed on housefire in the school based education programs currently delivered by Victorian and Tasmanian fire services.

Children’s application of what they have learned about housefire safety to a bushfire scenario is a good example of how, in the absence of other information, children will make use of the information they already have to solve a problem.

The other course of action identified by children is to stay and fight the fire:

Te: I’d stay because we believe that we can save the house

These children, in discussing their approach to protecting the house reveal some valuable insights into how children perceive bushfire risk. In children’s dialogue, there is an emphasis on stopping the fire from actually reaching the house. Building brick barricades, keeping the yard wet, and throwing water at the fire are all strategies aimed at putting the fire out or stopping it before it reaches the house. They are not preparing the house to withstand the heat and flames of the fire front as it passes over, as is the expert approach to stay and defend, rather their goal is to stop the fire from going past the house:

K: Um, well I’ve got a lot of dirt around my house so I can throw lots of dirt

on the fire to make it stop and it will.

If they can’t put the fire out before it reaches the house, then they will leave:

I: We would stay home...and my dad’s going to have a fire extinguisher and try and put out the fire and we would have buckets all around the house and if it got really bad we’d go to our cousins house.

Fleeing the fire at the last minute makes sense when we consider the children’s understanding of what happens as the fire moves past the house. For nearly all children, it is inevitable that the house will be destroyed. When discussing the consequences for a house as a fire passes over, all of their previously stated ideas about brick houses with no trees being safe become redundant. For them, there is nothing that can be done to protect a house in the path of a bushfire:

B: How would your [brick] house burn down?

R: Well the fire is powerful enough to absorb through the walls....and the

fires gonna be more powerfuller and burn the house down

To stay in the house as the fire passes over would mean getting trapped and killed. Children would prefer to jump in the pool or the water tank, get on the roof or try to run than seek shelter in the house:

B: Now the fire is at the back fence.

H: Well obviously I evacuate to my neighbours pool

J: But what would you do in the pool?

Amongst the children interviewed, those with the most sophisticated risk perceptions are those from families who take bushfire risk seriously, plan accordingly, and include the children in the planning process. Thus, for children at the primary school level the family appears to be the dominant influence. 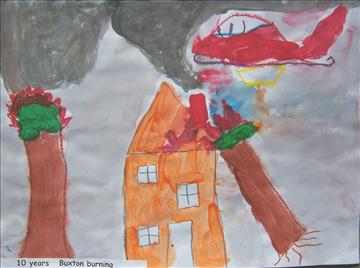 However, most children select firefighters as the most credible and reliable sources of information because they have hands on experience and specialised training. Given the level of trust children have in firefighters as sources of reliableinformation, and given the integral role trust plays in effective risk communication, an increase in the level bushfire education in primary schools would be a worthwhile investment of agency resources.

There is also evidence from this study that school based bushfire education would have benefits beyond the children themselves. Children exert a powerful influence in their homes and are capable of persuading their parents to consider and adopt preparedness measures.

Amongst parents interviewed, a large majority talked about their children coming home from school after housefire education and initiating the formulation of housefire escape plans. Parents noted that due to their responsibilities as parents, they were unable to ignore or dismiss risk messages that came from their own children. Using children to disseminate messages about bushfire risk to their families may be an effective way to get parents to think more seriously about bushfire risk and the importance of preparing.

Educating children is a seemingly viable approach to increasing levels of bushfire awareness and preparedness. However, children do not necessarily approach the bushfire education experience with the same set of perceptions or thinking styles as adults. It seems that teaching children about fire behaviour – how fires travel and spread, how houses burn down, etc –would help children to better understand the mechanisms underlying the consequences of consequences. This would provide a more robust foundation upon which to build their understanding of prevention, creating more opportunities for the promotion of preparedness and emergency planning in bushfire prone communities.