Living on the urban edge

Call it peri-urban, the rural-urban interface or the i-Zone, the spread of urban populations into the bushland fringe is creating new challenges for fire services.

Reducing the risk and impact of bushfire is a problematic and complex challenge. The aim of the Bushfire CRC Understanding Communities project is to increase community resilience to bushfires. In most communities only a small proportion of people have the capacity to prepare for and react adequately to a fire threat. Most people rely on fire services for protection but the services capacity to respond will always be finite and, at times, inadequate. The key to successful policies and management strategies lies with the communities in which they are to apply.

This Bushfire CRC project is looking at the differences within and between communities in terms of bushfire awareness, perceptions of bushfire and expectations of the roles of various organisations. The research has sought input from communities so that the policies and strategies actually reflect what these communities require.

Studies have revealed that there are many factors influencing a person’s perception of risk. There is general agreement that a cohesive community leads to realistic risk perceptions because of the ability to widely share knowledge and experience. However, peri-urban communities are typically not cohesive due to a growing influx of newcomers. Newcomers, particularly if from an urban area, cannot perceive the bushfire risk until they are aware of the bushfire risk. Awareness may be achieved through exposure to educational material or contact with long-term residents.

A general trend that has emerged is that people generally consider themselves or their property to be less at risk than their locality. Furthermore, the non-hazard benefits of living in the bush can moderate the perceived risk. 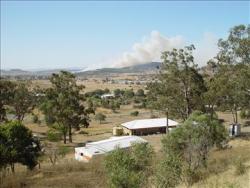 Most studies have found that people know they are responsible for some level of bushfire protection. However, which activities and to what extent varies greatly from person to person, and actually taking action to fulfill the perceived responsibility can be moderated by several factors.

Furthermore, the activity needs to fit in with a person’s lifestyle and neighbourhood. For example, a person who values naturalness may not undertake any preparation activity that alters the landscape. Busy lives also compromise action, and research has shown that fire protection activities actually undertaken are usually those that people undertake for other reasons such as keeping a tidy yard.

Expectations of neighbours and community

There is evidence of a link between community cohesiveness and bushfire preparation. A cohesive community is usually better prepared because of a good knowledge base and support network. However, when there is not a shared perception of risk, community norms such as maintaining the ‘natural’ look of the area may compromise bushfire preparation (for example, preparation of a firebreak).

In a cohesive community, people often do what they perceive to be expected by the community, and the community expects its individuals to act collectively. Newcomers who are often not part of the ‘community’, can be oblivious to community norms, and are often identified as people who do not undertake bushfire preparation.

The public perceive the primary responsibility of fire services to be fire suppression and protecting people and property. Most evidence indicates that the public highly values and has confidence in local brigades. Furthermore, people generally appreciate all communication efforts, and information received from brigades is perceived as credible.

People are clearly in favour of managing their own bushfire risk, but opinions concerning how it should be done vary greatly. Judgement of acceptability of management actions is influenced by many factors. For example, people with a good knowledge of bushfire and its ecological importance may support controlled burning. Those who highly value the aesthetics of forested areas may be against controlled burning.

An expectation that bushfire management is a government responsibility may lead to acceptance of any institutional arrangements. On the other hand, if the property owner accepts personal responsibility, any arrangements that impinge on perceived rights to freedom, such as regulations, may be strongly opposed.

Numerous studies have linked public knowledge, perceptions and opinions of bushfire and its management with information disseminated by the media. Some studies also suggested a strong public preference for bushfire information to be disseminated via the media (for example, television).

There is a strong reliance on insurance to protect people’s assets but some people may expect too much. For example, one study suggested that people view insurance as highly effective in protecting investment from bushfire; however there are many examples of bushfire victims not receiving their expected payouts.

Members of the Understanding Communities project – Alison Cottrell, Sally Bushnell, David Lowe and Margaret Spillman - undertook the Thuringowa Bushfire Survey in October 2005. This survey examined the knowledge, perceptions and expectations of Thuringowa peri-urban residents relating to bushfire risk, service delivery and participation in bushfire preparation activities. This was the second in a series of community case studies from around Australia. The first case study was of the community at Tamborine Mountain. The studies will provide fundamental information for fire services to better understand bushfire issues in their community. 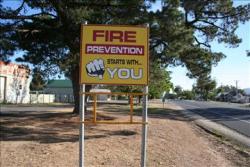 New research has found that many residents are doing too little preparation, too late in the bushfire season.

The Bushfire CRC Understanding Communities Project surveyed a north Queensland community in late 2005 to better understand the challenge faced by fire agencies of increasing the resilience to bushfires in diverse and often complex peri-urban communities.

The survey looked at the knowledge, perceptions and expectations of the residents relating to bushfire risk, fires services and participation in bushfire preparation activities.

The survey found that new residents in particular were overly reliant on the fire services for protection and only took responsibility for preparing their property once they saw bushfire smoke near their homes.

The report into the research undertaken by the Bushfire CRC at James Cook University of community perceptions of bushfires in peri-urban and rural areas of Thuringowa is the first in a series of community case studies to be undertaken in bushfire-prone areas around Australia.

Dr Alison Cottrell, from the university’s Centre for Disaster Studies and Project Leader of the Understanding Communities project, said that the Thuringowa report contains information that will make a significant contribution to a national bushfire research framework to better manage the risk from fires.

“It is essential for communities to work closely with their rural fire brigades to improve their level of preparedness for bushfires and to build a capacity for self-sufficiency and resilience. In most communities only a small proportion of people adequately prepares for and reacts appropriately to the threat from bushfires.

”The survey indicates more than 90% of people rely on the fire services to protect them and their property, but the fire services’ capacity to respond is finite, and in major events resources may be inadequate.”

“This survey clearly defined the issues for this community. In understanding such issues, fire services can more efficiently and effectively direct their resources to increase community resilience.”

Dr Cottrell said that the main findings of the research included:

the main prompts for people to commence preparations were seeing controlled or uncontrolled fires in their area or media reports from other areas.  However, the latter two events occur mainly during the local bushfire season and preparations should be completed well before this time;

40% of people prepared a firebreak around their property and 13% planned to leave early if threatened by bushfire – the rest of the preparations, such as cutting long grass, clearing undergrowth, rubbish and cleaning leaves from gutters, although important are considered normal maintenance by the residents;

increasing the level of cooperation and collaboration between the fire services, local government, community and other groups is essential to best manage the bushfire risk, build community capacity and ultimately increase community safety and resilience.

The Queensland Fire and Rescue Service, the major supporter of this study, is also partner in the Bushfire CRC.