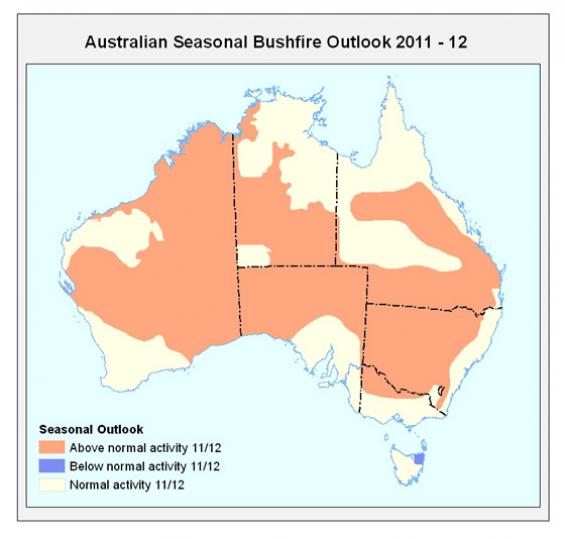 The middle of Australia from coast to coast has the potential for above-normal bushfire activity this coming southern fire season because of very large areas of drying grass that grew extensively across the continent following the heavy rains last summer.

This is the major point made in the Bushfire Cooperative Research Centre’s Southern Australia Seasonal Bushfire Outlook for the states and territories below the Tropic of Capricorn, published today.

A thick, tall band of grass extends across much of the middle of  Australia from the Indian Ocean in the west to the Pacific Ocean in southern Queensland and the Great Dividing Range in New South Wales. The grass – waist- and even shoulder-high in places – has flourished because of the heavy rains that accompanied the very strong La Niña event at the beginning of 2011.

With much of this grass now curing because of drier recent weather, the potential exists for above-normal bushfire activity across the centre of Australia during the 2011-12 southern fire season.

These expectations summarise the views of the attendees at the Southern Seasonal Bushfire Assessment Workshop, held in Adelaide on August 23 and 24 and chaired by Rob Sandford, Assistant Chief Officer of the Country Fire Service, South Australia. The workshop, supported by the Bushfire CRC, brought fire and land managers and meteorologists together to evaluate the upcoming season for the southern part of Australia, below the Tropic of Capricorn.

Workshop attendees noted that major grass fires – once common in many areas – have been relatively few in recent years because of the long drought that ended over much of Australia in 2010.

Some jurisdictions are already warning communities about the potential for major grass fires this season.

The Seasonal Outlook is published as a Bushfire CRC Fire Note and is also available online here. The full report from the workshop is available here.

Each year, the Bushfire CRC publishes separate seasonal outlooks for northern and southern Australia. The fire season starts earlier in the north than in southern Australia, coinciding with the “Dry Season,” so the Northern Australia Seasonal Bushfire Outlook was published on August 9. It is available here.