A fence against bushfire attack - research

A solid steel or hardwood fence provides better protection against bushfire attack than that of treated pine or open slatted fences, according to research experiments conducted by the Bushfire Cooperative Research Centre and CSIRO.

Project Leader Justin Leonard presented his research to around 35 representatives from fire agencies, government and the building industry in Canberra in early February. The Residential Fencing Research Forum was opened by Commissioner Peter Dunn, the ACT Commissioner for Emergency Services, and chaired by Michael Ross, Chief Officer for the ACT Rural Fire Service. 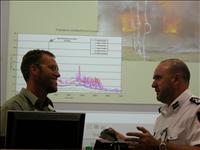 'Solid fences made from steel or hardwood timber were seen to be effective at stopping the transfer of both fire and radiant heat,' says CSIRO’s lead bushfire researcher Justin Leonard.

'The results from this six-month study support the anecdotal evidence that solid fencing offers increased protection for homes and can help to reduce the transfer of both fire and radiant heat.

'This is critical because our post-bushfire survey results show that the majority of houses actually survive the first fire front, but burn down during the following few hours from ignition caused by burning debris or ember attack which may come from vegetation or combustible items within the urban environment.

'In our study solid steel fences did incredibly well at repelling fire and radiation attacks. The protection may be enough to prevent combustible items near the fence from igniting, thus reducing the chance of fire spreading into the inside of the property boundary.'

The steel fence survived all experiments with its structure in tact, but there was buckling and separating of the joints of panels and posts. There was also scorching of the fence’s surface coating.

'The proviso for hardwood fences is that people need to ensure there are no combustible materials near the hardwood fence – such as combustible ground cover, play equipment, sheds or cars. If these elements burn the fence may act not as a barrier but as a flame source.  When these elements are present, the fence becomes far less effective and can actually become part of the problem.'

Hardwood fences also struggled during the structural fire exposure experiments – with the fence exposed to direct 2.5-m high flames for 30 minutes. The hardwood palings started to burn through in five and a half minutes.

'This suggests that these types of fences may not be effective in limiting house-to-house fire spread in large fires as we actually observed during the Canberra bushfires,' Mr Leonard says.

It was also found that hardwood timber fencing systems with open slats did not perform as well as solid fencing systems – the slats can leave houses exposed to wind blown embers, radiant heat and offer little resistance to the passage of flame.

Treated pine’s performance as a heat barrier was good until ignition of the fence occurred.

'Treated pine ignited and burnt to completion in all experiments, including the experiment where leaf litter - which readily accumulates at the base of fences - was ignited,' Mr Leonard says.

'This would mean a higher risk of house loss through thermal exposure, wind blown embers and the mechanical impact of the fence falling.'