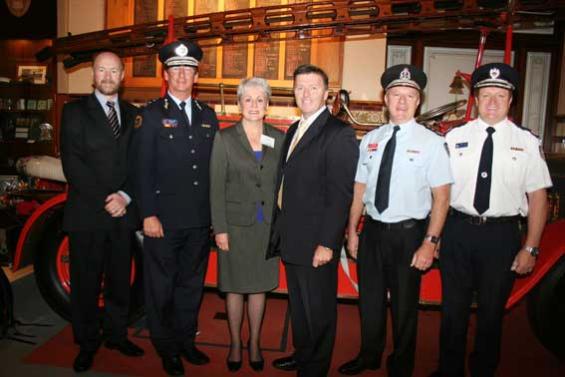 The Sydney City historic fire station No 1, was a fitting venue to launch the AFAC and Bushfire CRC annual conference which will be held in Sydney later this year, themed around ‘New World, New Thinking’. NSW Fire and Emergency Service Commissioner’s, senior personnel and the Minister of Police and Emergency Services NSW, The Hon. Michael Gallacher MLC, were on hand to support the launch.

The Minister noted it was critical to have dialogue with other agencies.

“That dialogue must also be within your own organisation and within the domestic framework of this country if we are ever going to be able continue to learn and work out what has gone wrong in the past and put in place measures to prevent it occurring in the future.  A conference such as this with well over 1000 delegates attending does show that this is a significant conference of its kind in this area.” He said.

Now in its eighth year, the annual conference has grown to be the pre eminent knowledge sharing event for the fire and emergency service sector in Australasia. More than 1,200 delegates are expected to attend from around the world with key note speakers confirmed from Europe, the UK and USA. They will be supported by national and internationally recognised experts and researchers.

The trade show with more than 100 exhibitors taking over 7,000sq meters in floor-space, will be the largest trade expo for the emergency service sector in the Southern Hemisphere this year.

According to Naomi Brown AFAC CEO, the event has gone from strength to strength with around 1,000 delegates attending the annual conference in Darwin last year.

“I am really looking forward to this year’s conference because I think our theme is critical for where emergency services are placed at this point in time. We are all facing significant changes in technology and government and community expectation. How we   plan, respond to and manage fire and natural hazards and disasters in the future must take this into account, making sure we continue to build capacity and capability across our sector.“ She said.

Chair of the Conference Steering Committee and Commissioner of the NSW State Emergency Service, Murray Kear said, New World, New Thinking is a very appropriate title for the conference.

“When you think of the world over the last couple of years and what we have seen with the fury of mother nature with earthquakes and cyclones and the impact they have on communities, it really does seem we have shifted another gear with natural disasters and their impact globally.  As emergency managers we strive to continually keep on top of and review how we deliver services to communities.  Firstly, we should aim for prevention. Where we can’t prevent those emergencies from occurring, we should work to prepare communities for their impact and, of course, we will be there to assist them where needed,” he said

“The conference is a major knowledge sharing event for the public safety industry.   While our members represent all fire and emergency service agencies in Australasia, we recognise that many others have a role to play, specifically those in local government or in industries such as mining, that have a significant exposure in emergency management.” Ms Brown explained.

The full conference program is now available and the organising committee has put together a comprehensive and exciting program, securing international and Australian expert speakers on a diverse range of topics including:

Ben Self– Innovator in social media and head of Blue Star Digital a US based consultancy with clients in   commercial, not for profit and government sectors. In 2008, Ben provided a variety of technology and services to the successful Barack Obama presidential campaign, including online fundraising, voter outreach, social networking, and web hosting.

Lee Johnson AFSM,Commissioner, Queensland Fire and Rescue Service and AFAC President , Additionally, Lee represents Queensland as a Director on the Board of the National Aerial Firefighting Centre (NAFC) and has a distinguished fire service career spanning more than 35 years. Lee is an insightful and captivating speaker.

ProfessorJose Torero, is Professor of Fire Safety Engineering, a Director of the BRE Centre for Fire Safety Engineering and Head of the Institute for Infrastructure and Environment at the University of Edinburgh. Professor Torero has authored more than 150 journal publications and 500 technical documents in subjects ranging from forest fires to spacecraft fire safety. He also participated in landmark investigations of the World Trade Center 1, 2 & 7 collapses, Madrid Windsor Tower fire and the Buncefield explosion and fire.

Sir Ken Knight–  has more than 40 years distinguished career service in fire and rescue in the United Kingdom and currently advises to the highest levels of British government on emergency management.He has been a key player in the UK Fire and Rescue Service for many years leading the service through significant change.  Sir Ken was awarded the Queen's Fire Service Medal in 1991, the CBE in 2001, the Order of St John in 2005 and was appointed one of Her Majesty's Deputy Lieutenants of Greater London in May 2006. Later that year Sir Ken was knighted in the Queen's Birthday Honours in recognition of his outstanding contribution to the fire and rescue service.

On Monday 29 August, a number of professional development events will be held and on Thursday 1 September the third day of the conference will be a dedicated science day, tailored to the researcher community and those in emergency management who utilise that research.

The full conference program is available on the conference website www.afac2011.org.au

The conference will be staged at Darling Harbour 29 August - 1 September 2011.