A better outlook on bushfires

This article first appeared in the Spring 2007 issue of Fire Australia magazine.

Fire managers around Australia are increasingly arming themselves with a new research product as they provide advice to government and policy makers on the severity of upcoming bushfire seasons.

The National Seasonal Bushfire Outlook Report, a new product of the Bushfire Cooperative Research Centre, has become an essential resource in the preparation for bushfire seasons.

The first National Seasonal Bushfire outlook for the 2006-7 season was circulated widely throughout Australia’s fire and land management agencies after its release in October last year. It was central in many government and departmental discussions on resource allocation and funding, and was tabled in the Western Australian parliament. 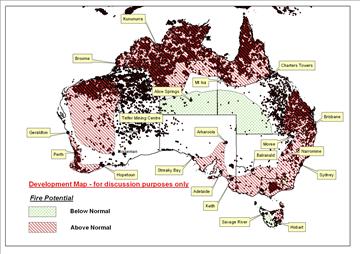 The prediction of severe fire potential for much of southern Australia not only prompted national headlines but was pivotal in getting each state to closely re-evaluate its preparation and resources for the upcoming season.

In Tasmania, the report  was used to brief the State Emergency Management Committee and in turn the Regional Emergency Planning Committees, according to Mark Chladil, Fire Management Planning Officer for the Tasmania Fire Service.

“The outlook was used to promote the early commencement of the fire danger period to the public and to warn other agencies about the likelihood of fires and fire related expenditure. Given the drought we were experiencing the operational staff were already aware of the likely severity of the season,” Chladil said.

“The separation into the northern and southern fire season outlooks together with their earlier compilation should allow for a more timely product for this season.”

The Queensland Fire and Rescue Service Rural Operations (QFRS) contributes considerable resource and importance to National Seasonal Bushfire workshop.  Fergus Adrian, the manager of planning and research in Rural Operations said research into the Queensland seasonal bushfire outlook commenced in Autumn and provided updated information jointly gathered by QFRS and the Bureau of Meteorology on climate and seasonal fuel conditions during the winter period leading up to the fire season.

“Climate and fuel data gathered for the workshop is used by QFRS in pre-season readiness activities including the timing of community awareness programs, briefing government, other fire and support agencies and contracting firefighting aircraft,” he said.

“Importantly, on both a state and national level it provides an opportunity for fire agencies to appreciate resource demands such as intra and interstate assistance and to identify potential safety issues over the duration of the fire season.”

In August this year, fire experts from around Australia gathered again to assess the potential for bushfires over the final months of 2007 and into 2008.

About 40 fire managers representing each state met at the Bureau of Meteorology in Melbourne for the second National Seasonal Bushfire Assessment Workshop.

The workshop developed a report that details the bushfire scenario across Australia into early next year. The workshop follows the first national workshop mid last year and a smaller workshop in Darwin in May this year that focussed on fires in northern Australia.

The workshops and the reports are outcomes of the Bushfire CRC Fire Weather-Fire Danger project, led by Dr Graham Mills and Chris Lucas of the Bureau of Meteorology. 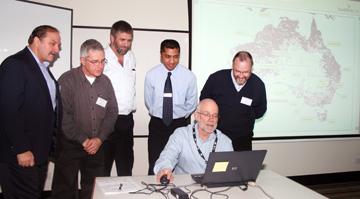 Dr Mills (pictured seated, with fire managers from across Australia at an August workshop) said the process was modelled on a format that has been operating in the United States since 2003. These workshops are coordinated by Dr Tim Brown of the Desert Research Institute who assisted with the first Australian workshop in 2006.

“The goal of the recent workshop was to develop an outlook of significant fire potential over Australia for the remainder of 2007 and into 2008 by gathering experts to produce a consensus view on the current or upcoming fire season,” he said.

“Such an outlook provides a basis for managers to make strategic decisions on issues such as resource allocation, staffing levels, and prescribed burning.”

For the purposes of the outlook report fire potential is defined as:

The chance of a fire or number of fires occurring of such size, complexity or other impact that requires resources beyond the area in which it or they originate.

This is not simply a function of the weather or climate. Rather the potential for a significant fire situation is the sum of factors that includes fuels, ignition triggers, timing and duration of fire season, significant weather triggers and resources available in an area.

The Bushfire Seasonal Outlook draws on a combination of scientific tools, including the monthly Bureau of Meteorology climate outlooks for the forthcoming season across various regions of Australia. These outlooks give the probabilities of above median rainfall and maximum and minimum temperature for the three months to come. The outlooks are produced with a statistical model and are based on historical relationships with patterns of ocean temperatures in the Pacific and Indian oceans.

Unlike relatively skilful daily weather forecasts, a seasonal climate forecast will never be exact. Rather, the probability of a certain event occurring will be given – for example, there is a 65% chance of above-median rainfall occurring over a certain month.

In Australia, the predictors used in the seasonal forecasting relationship are the patterns of sea-surface temperature (SST) in both the Pacific and the Indian oceans. Particularly in the Pacific, the variability of SST depends on the timing and impacts of the El Niño-Southern Oscillation (ENSO) phenomenon.

Soil moisture is another crucial input to the Bushfire Seasonal Outlook. The researchers used the Keetch-Byram Drought Index to determine the soil moisture deficit over a specific area, which is affected by both temperature and the amount of rainfall.

Another input to the Bushfire Seasonal Outlook is the Normalised Difference Vegetation Index (NDVI), which provides a means of monitoring the vigour and density of green vegetation.

The NDVI is a satellite product produced by the Bureau using measurements from the Advanced Very High Resolution Radiometer (AVHRR) instrument aboard polar orbiting satellites. The product is useful for giving a broad-scale overview of the state of the vegetation and of regions of anomalous greening or browning of vegetation.

When these scientific tools are combined with the land manager’s knowledge of the amount and flammability of the vegetation across their areas, the fire history across the landscape, and data on the resource capacity of fire and land management agencies the result is the Bushfire Seasonal Outlook.

The approach required to evaluate this potential is cross-disciplinary in nature and requires inter-agency cooperation from around Australia. To achieve this outcome, severe-weather meteorologists from the Bureau of Meteorology Regional Forecast Centres, climatologists from The Bureau’s National Climate Centre and fuel and fire management specialists from the various state fire and land management agencies meet to produce a consensus outlook of fire potential for Australia.

At the recent workshops, Bushfire CRC and Bureau of Meteorology staff from around Australia were joined by representatives of the following agencies: