Cars put to the test in bushfire conditions

Bushfire fatalities have long been a major concern for fire agencies and it has been the death of people in vehicles that has come under particular attention in recent years.

A snapshot of recent history shows the danger of evacuating or travelling during a bushfire. The 1965 Longwood bushfire in Victoria produced a tragic mass fatality with a family of seven perishing in a vehicle. In the Hobart bushfires of 1967 a total of 53 people perished, of which 26, both civilians and firefighters, were in or near vehicles. The Lara bushfires in Victoria in 1969 saw the loss of 17 civilian lives when they were trapped on the Geelong-Melbourne highway. On Ash Wednesday in 1983, in Victoria alone 16 civilian lives were lost in circumstances where vehicles were involved. More recently, nine people lost their lives in the Eyre Peninsula fires in South Australia in 2005, eight of who were found in or near their vehicles. Two more people were found dead in their vehicle by the roadside in the 2006 Grampians fires. 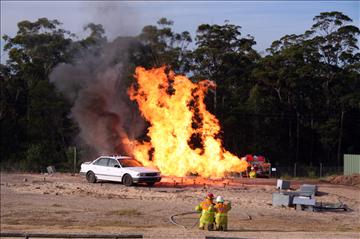 These alarming figures over many decades highlight the need for strategies to prevent such unnecessary loss of life. While it is understood that a range of factors can contribute to such fatalities, currently there is insufficient understanding of the subject of vehicle occupant behaviour during a bushfire.

Research conducted by the Bushfire Cooperative Research Centre (CRC) with CSIRO scientists and initiated by NSW Rural Fire Service sought to determine the maximum heat load that a vehicle could face while remaining a safe haven for its occupants, both in terms of the air temperature and the air quality inside the vehicle.

The experimental study of burnovers of civilian passenger vehicles was conducted in January 2007 at the NSW Rural Fire Service Hot Fire Training Facility in Mogo, on the New South Wales south-coast. Seven used cars were subjected to burnover conditions with a gas flame front simulator. The two-wheel-drive sedans, which ranged in size, age and make, were donated by the NRMA.

Each car was fully instrumented with sensors to monitor for air toxics and heat levels at many points inside the vehicle including above and below the window height, front and rear seats and, above and beneath a woollen blanket. Comparisons were made between having the air conditioner on or off and by facing the car forwards, side-on or backing to the flames.

The research made several key observations: 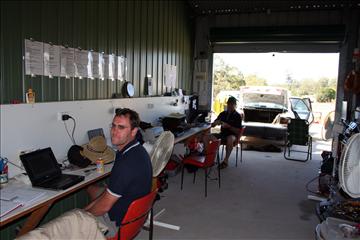 “Some tests recorded peak temperatures up around 300°C in parts of the cabin but at the same time down low under a woollen blanket the temperature was around 40 to 50 degrees Celsius, which is quite survivable. Even when blankets were not used sheltering below the window level in the front and rear foot wells was the best strategy”

Leonard said the smoke and toxic gases inside the melting cars was often more significant than the heat.

“Many cars are lined with PVC materials and when that is heated, even before it ignites, it will release hydrogen chloride gas. That is a severe irritant and this could cause people to panic and get out of the vehicle.”

Further research is needed to test the findings with more current model vehicles and with utility-type and 4WD vehicles, which are common in many rural and peri-urban settings and have featured in a number of recorded fatalities.

Guidance on getting caught in your car

Advice for people trapped in their cars during a bushfire has been updated following this groundbreaking study into what happens to a vehicle caught in the middle of a bushfire. 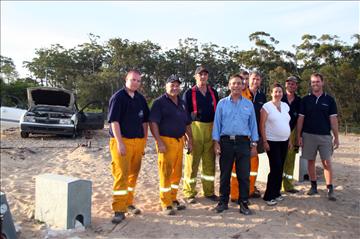 The Australasian Fire and Emergency Service Authorities Council (AFAC), the peak body for the fire and emergency services, has used this research to refine its guidance for people in vehicles during bushfires.

These guidelines were previously based on evidence gleaned from tragedies from the fireground, the observations of emergency service workers and from limited tests on vehicles in the 1960s.

The guidelines were sound but there remained uncertainties on some factors including the construction and materials of modern vehicles and the influence of protective actions taken by occupants. (For example, having the air conditioning on or off, the orientation of the car to the fire front, seeking protection under woollen blankets, or seeking refuge in various parts of the car’s interior.)

The Chief Executive Officer of AFAC, Naomi Brown, said this research provided a better understanding of what happened to vehicles in bushfire conditions. Fire agencies and emergency services would use this research as a basis for their community safety campaigns.

“It is with extreme caution that people should be given advice about taking refuge in their vehicle in a bushfire. This research shows that sheltering inside a vehicle is a high risk strategy and that it is highly unlikely that a person will survive in all but the mildest circumstances.”

“Whilst sheltering inside a vehicle offers a slightly higher chance of survival than being caught in the open, the current policy of preparing your home, and deciding early whether you stay or go, is a much safer option. It is essential that all people likely to be exposed to bushfire risk realise this.”

Individual fire agencies around Australia are now looking at these guidelines and the research to determine how they can be best implemented into their operations.

More information: The AFAC guidelines for people in cars during bushfires can be found at www.afac.com.au