Changes of wind and fire

Wind change matters to fire managers. It can change bushfire activity in a moment, shifting the flank of the fire to the fire front, suddenly putting fire fighters and communities at risk. A change in wind can also change the rate of fire spread, increase the quantity, distance and direction of downstream spotting, and change the safety status of residents and townships in a flash.

A complete analysis of the 7 February bushfires in Victoria this year is still underway but in the past, there have been many notable disasters associated with wind changes:

A project in the Bushfire CRC Program A Fire Weather – Fire Danger has focussed on understanding two things:

Since 2000 the Bureau’s Victorian Regional Forecast Centre has manually verified their wind change forecast charts at selected stations at the end of the fire season. This verification requires an experienced meteorologist who uses the time series of observations from the verification location, together with a series of detailed spatial analyses (‘weather maps”) to estimate a single wind change time, which is then compared with the forecasts. This process is demanding and time-consuming.

It was the aim of this Bushfire CRC research project to develop algorithms to automate this process – from the sequence of half-hourly observations at a site on a “wind change day”, to determine a single wind change time that, as far as possible, matched the changes interpreted by the meteorologist’s verification.

This turned out to be quite challenging, as wind changes differ widely in their intensity, even on the same day. The research developed a Wind Change Rate Index (WCRI), which in simple terms represents the rate of change of wind direction with time.

However, because a wind change is more significant as the wind speed becomes stronger the wind speed is included in the calculation of the WCRI. As wind speeds can be strong before and after the change, and as there is often a lull at the change time, these decisions were highly complex. By fine tuning the algorithm it was able to estimate times that compared favourably with the times estimated by the experienced meteorologists.

One of the by-products of this algorithm is that not only is a time of maximum wind change produced, but the algorithm also estimates a change start time and a change end time, which suggests that the concept of a wind change period may have some merit.

These models predict the wind speed and direction, temperature, humidity, and pressure at every gridpoint (a regular lattice approximately every 5km) every hour. If these forecasts are considered as a time series of observations, then a WCRI can be calculated at every gridpoint every hour.

This has two applications:

1. The time of maximum wind change can be estimated at a gridpoint closest to an observation site and the numerical forecasts of wind change time verified.

2. A spatial field of WCRI can be generated, and animated in time to provide a powerful visual display of the wind change, and the way it develops, as it is forecast to move across a region.

Such a spatial field of WCRI is illustrated in the panel below, which show a simulation of the cool change on Ash Wednesday 1983. In these panels the barbs show the direction and speed of the 10m wind, while the shading shows the Wind Change Range Index, with increasingly dark colours indicating a stronger wind change in terms of change in direction and higher speeds. The first panel shows the simulation for 4pm EDST (3:30pm CDST), with the frontal wind change approaching Adelaide, and just beginning to intensify along the western Victorian coastline. The second panel shows the situation five hours later with a much more intense change approaching Melbourne. 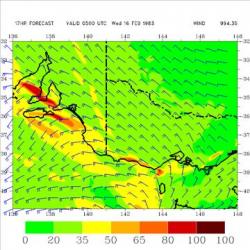 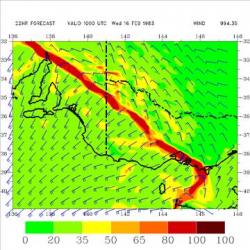 When forecasters use NWP model guidance they have to decide whether to “go” with the guidance, or whether to make some allowance for possible error. Knowing the biases and error characteristics of the model forecasts helps this decision. The verifications of the Bushfire CRC research show that the forecasts are largely unbiased with time (neither too slow or too fast on average), and that more than 60 percent are within 2.5 hours, for forecast lead times between 9 and 36 hours.

A further aspect of the study has been to understand how cool changes in disastrous fire event days differentiate from cool changes on more regular fire weather days. The re-examination of the Ash Wednesday fire event revealed that a characteristic of the most extreme days, and those on which the majority of bushfire deaths in south-eastern Australia in the last 45 years have occurred, is the strength of the front at around 1.5 km above the land surface. Many of our summertime cool changes are relatively shallow, but those such as that of Ash Wednesday, the day of the Hobart fires in 1967, the Streatham fires in western Victoria, and the fires on Lower Eyre Peninsula in South Australia in 2005 are characterised by strong temperature gradients and high temperatures at 1.5km elevation ahead of the front. This indicates a deep strong front that tends to have strong winds both before and after the wind change. A diagnostic tool that allows the strength of any front to be put in the historical context has been developed by this project.

Adoption of the research

The project team has run the software at the end of the last two fire seasons and provided objective verification data to the Victorian Regional Forecast Centre. These have been used in its end-of-season forecast verification.

The spatial WCRI forecasts have been made available to forecasters since the 2006-7 fire season, and form an important part of the fire weather guidance. The project has received enthusiastic endorsement of this form of forecast guidance and the product has been included in the Bureau’s new Graphical Forecast Editor forecast system that was implemented in the Victorian Regional Forecast Centre in late 2008.

A software package has been developed that will allow the verification of the fire weather forecaster’s wind change forecast to be run by the Bureau’s regional offices. This package, which runs on the Bureau’s workstations, takes a tabulated set of forecast wind change times at given stations, extracts observational data at those stations from the Bureau’s archives, extracts numerical weather prediction model data from another archive, and computes verification statistics for both the official forecasts and for the corresponding numerical forecasts. It takes less than an hour to install and set up. A users guide is being finalised.

This study has provided a better understanding on how fronts intensify on the Victorian coastline, and then surge along the coast. This understanding has been included in training sessions for US fire weather forecasters, and also in an Advanced Forecaster Workshop attended by forecasters from all states.

By Graham Mills, Graham Mills is Bushfire CRC leader of the Fire Weather project and a senior researcher at the Bureau of Meteorology.