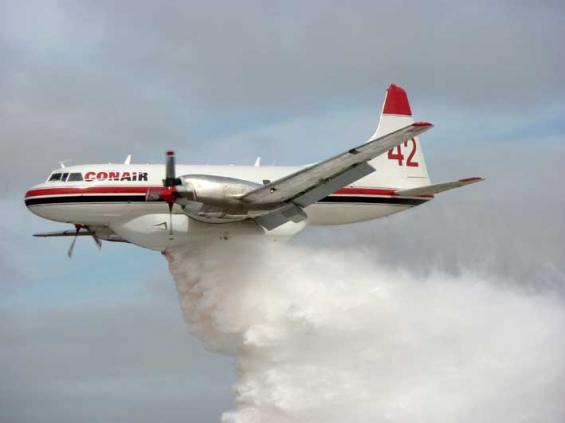 Convair water bombers have conducted their first test drop as part of an Australian-first trial by the Bushfire CRC to determine the aircraft’s suitability for Victorian firefighting,

The two Convair CV580 fire-fighting aircraft, which are on a 12-week lease from Canada, departed Avalon Airport before flying over nearby grassland to drop 8000 litre loads of water and retardant.

Fire Services Commissioner Craig Lapsley said today was the first in a series of trial drops that would test the aircraft’s capability over a variety of terrains, including forested areas.

“The Convair trial is an Australian-first and the retardant drops will help demonstrate the aircraft’s capabilities, and ultimately help determine if they meet Victoria’s firefighting needs long term,” he said.

“These aircraft have typically been used in North America for first-attack and for laying retardant lines in forest and grass fires.

“Yesterday, they were deployed together to the Manns Beach and Nowa Nowa fires in Gippsland to drop retardant and help suppress the fire.

“This 12-week trial is part of the state’s preparation against the threat of bushfire and the Convair are always on standby, working as part of Victoria’s 50-strong firefighting aircraft fleet.”

Mr Lapsley said despite significant rain and flooding the threat of serious fire remained, particularly in grassland areas within the state, and the Otways and Gippsland.

“While we have had several months of above-average rain, this only goes a small way towards truly catching up on our longer term rainfall deficits,” he said.

“The recent rainfall has also stimulated the growth of grass and pasture throughout the state and fire, particularly grassfire, remains a real risk across much of Victoria.

“We are already seeing this in Gippsland and Victorian communities need to continue to be alert to the threat of fire and not be complacent.”

Representatives from the National Aerial Firefighting Centre and other states witnessed the trial drop today.

Fitted with a large belly tandk, each Convair CV580 has a capacity of 8000 litres of water, foam or fire retardant.

With a flight speed of approximately 500 kilometres per hour, they can access any part of the state from their base at Avalon in well under an hour.