Fire danger looms in the North 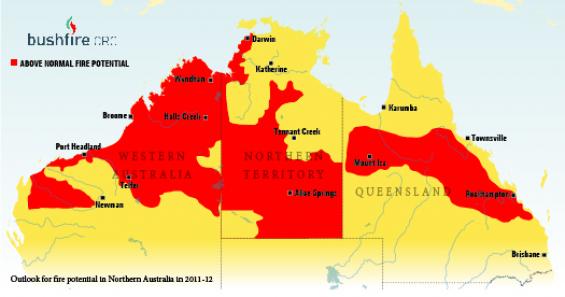 The main cause of the above normal risk is strong vegetation growth in many areas fuelled by the wet weather that accompanied the very strong La Niña event of 2010-11.

In Western Australia, the Kimberley has an above normal bushfire potential, with the fuel loads remaining significant despite increased prescribed burning across the region.

Vast areas of Central Australia as well as the north-west coast of the Northern Territory can expect above average bushfire potential thanks to two years of above-average rainfall that have increased fuel loads and fuel continuity.

Queensland is facing above-normal fire potential over a vast area of coastal and inland areas of Central and Northern Queensland, thanks to abundant and continuous highly cured grassland.

The Seasonal Outlook is an outcome of the North Australian Fire Management Group meeting in Kununurra in June. This meeting was jointly hosted by the Fire and Emergency Services Agency of WA, the Department of Environment and Conservation WA, and the Bushfire CRC.  A Seasonal Outlook for southern Australia will follow a similar meeting to be held later this month.

The Seasonal Outlook for northern Australia is published as a Bushfire CRC Fire Note and is available here: http://www.bushfirecrc.com/firenotes