Fire in the Landscape - Lessons Learned 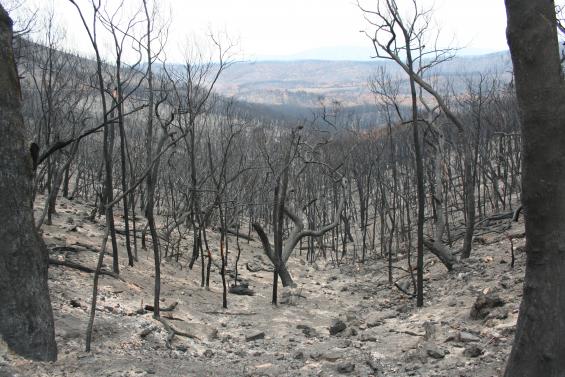 What has been learned about how fire affects water supply, carbon emissions and smoke?

The Fire in the Landscape research theme of the Bushfire CRC was set up to address some of the key issues that land management agencies face in managing bushfires.

Featured in Fire Australia Autumn 2012, the four projects under the theme carried out by researchers at the University of Sydney and the University of Melbourne have significantly advanced the understanding of key aspects of fire, ecology and their complex interactions. The projects have investigated fire and water quality, how forests recover from fire, how different vegetation emits greenhouse gases, and the carbon emissions from different fires.

“The ability to determine the fire-related effects of hydrology, erosion, carbon storage and carbon emissions will ensure our land can be managed better before and after fire, our water resources are preserved and maintained, and our air is fresh and clean,” Mr Cooper said.

“The application of the tools developed, and in development, by the Bushfire CRC researchers will help land managers better plan strategies for fire management and regeneration after a fire.”

The key findings of the four projects and how the research can be used are explained below.

Quantifying water quality risks following wildfire
This research, undertaken by the University of Melbourne’s Dr Gary Sheridan and Dr Petter Nyman, studied how the reduction of vegetation caused by bushfires can lead to significant soil erosion. Erosion is worsened by increased fire severity, higher rainfall intensity and steeper slopes. It is also likely to be greater in areas of the landscape that are normally drier.

Dr Sheridan and Dr Nyman developed relationships that could underpin a model that predicts the distribution of erosion events in space and time. The model would be directly applicable to landscapes of the Great Dividing Range from Kilmore in Victoria to the boundary of the Sydney Basin. It could be used by planners to identify areas susceptible to erosion, help locate sediment control measures and help plan appropriate water supply and drainage infrastructure. The work may also be useful at a strategic level to inform water policy.

The key findings are likely to be applicable worldwide, but specific predictions will vary depending on geology and soil type. Users of the science could piggyback on the work done so far by partnering with the researchers to fine-tune the outputs for new areas.

Vegetation water use in mixed-species forests following fire
This project, into fires and hydrology, was carried out by Dr Tina Bell and Dr Tarryn Turnbull from the University of Sydney. It revealed that vegetation water use in mixed-species eucalypt forests (forests that are comprised of more than one species of eucalypt) did not increase markedly during the recovery phase following intense fire.

The findings from this project can be used by catchment land planners and water supply authorities to find optimal strategies for simultaneously managing fire and ensuring water supply continuity. The results are directly applicable to the mixed-species catchments in south-east Australia.

Dr Bell and Dr Turnbull are finalising a tool, designed for land management agencies, that will greatly simplify the process of estimating vegetation water use.

Outside of south-east Australia, catchment managers may be able to build on this work and have the vegetation water use models validated for new ecosystems. The work may also be useful at a strategic level to inform water policy.

Findings showed that vegetation containing more moisture produced less carbon dioxide and more carbon monoxide than drier vegetation, and that none of the gaseous components of bushfire smoke that were measured using the experimental setup were produced in toxic quantities. The study also showed that an introduced weed, African lovegrass, was much more flammable than the native Australian grasses.

The greenhouse gas emission factors can be used by Australian and international land management agencies to help manage carbon. The identification of variable flammability within Australian fuels is useful for fire managers in jurisdictions with African lovegrass. Recognition of potential differences in flammability between co-located fuels introduces a new factor that may need to be accounted for in fire behaviour models.

The work can be used by land managers in Australia’s south-east to estimate their contribution to carbon emissions from planned burns in dry forests. The results may also provide a ballpark estimate of emissions from burning similar forests outside southeast Australia. The data could be used by the federal government in the national carbon inventory system, which will report on carbon emissions associated with land use.

For more information, including a Fire Note on each project, click here.