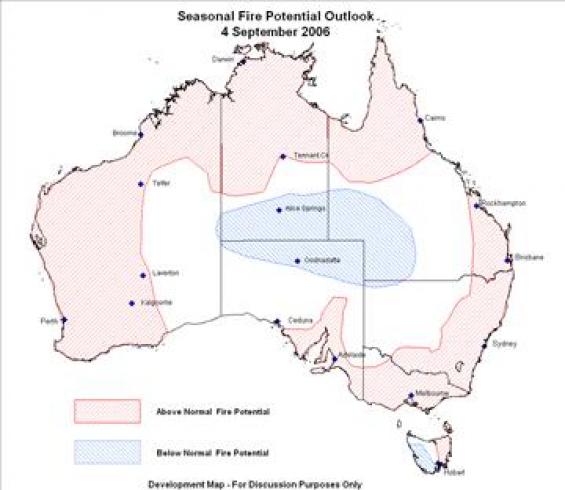 Above normal bushfire potential is predicted for much of Australia over the coming months, according to the first national assessment from climatologists, meteorologists and fire agency staff.

And southern and eastern Australia can also expect the fire season to begin much earlier than usual.

These conclusions were reached at the inaugural Seasonal Bushfire Assessment workshop organised by the Bushfire Cooperative Research Centre.

The workshop has produced a report that details the bushfire scenario across Australia through to February 2007. The report says that most of southern, eastern, western and northern Australia is likely to have an above-normal fire season due to a combination of factors including drought in some regions and high rainfalls in others.

The interior of the continent and the south-west coast of Tasmania are the only regions with a below-normal fire potential.

An active tropical cyclone season in early 2006 in northern and western Australia brought significantly higher rainfalls to much of this area. This has lead to an increase in the growth of grass and other vegetation in normally vegetation-spars areas. This increase in fuel suggests an above normal fire potential.

Southern and eastern Australia and coastal Western Australia have experienced drought over the same period. These dry conditions have primed the forest fuels for burning.

The report will provide information to assist fire authorities around Australia in making decisions to reduce the negative impacts of bushfire, including decisions on bushfire resource planning and prescribed fire management. Reports updates will be issued as needed.

Bushfire CRC researchers Graham Mills and Chris Lucas, of the Bureau of Meteorology, led the workshop with Tim Brown from the Desert Research Institute in Nevada. 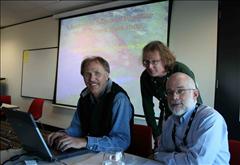