Grass will again pose the biggest fire risk this summer 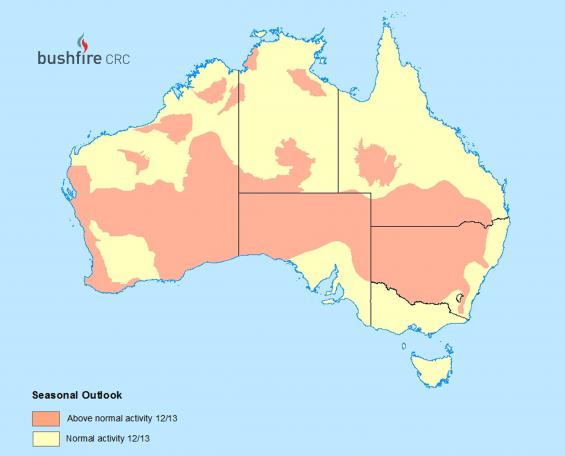 Determining the expected bushfire potential across the country is a scientific process. The Bushfire CRC recently brought together fire and weather experts from around Australia to discuss the upcoming bushfire season. By Nathan Maddock,Fire Australia magazine Joint Editor.

Vast parts of Australia face above-average bushfire potential this bushfire season, according to the Bushfire CRC’s partners the Bureau of Meteorology and fire agencies across the country.

Fire and weather experts met in Sydney at the headquarters of the New South Wales Rural Fire Service (RFS) in late August for a two-day workshop to discuss the fire potential across Australia. The workshop produced the Bushfire CRC’s bushfire outlook for the upcoming season across southern Australia (below the Tropic of Capricorn). When combined with the northern Australia bushfire outlook, produced in early August in Townsville and covering northern Queensland, the Northern Territory and northern Western Australia, the result is the bushfire outlook across the country. These seasonal outlook workshops, supported by the Bushfire CRC, have been held each year since 2006.

Simon Heemstra of the RFS hosted the Sydney workshop and noted that, like last summer, grass will again pose a major threat.

“This season, the above-average forecast is due to the abundant grass growth from the high amount of rain from two strong La Niña events seen in the past two years across the eastern seaboard and South Australia.

“Fuel moisture content within forests is still high, but the rainfall has continued to provide widespread vegetation growth in the grasslands, which pose an above-average threat,” he added.

Australia has endured significant natural disasters in the past two years, mainly due to the back-to back La Niña events that have strongly influenced our weather—events such as the record flooding experienced in Queensland, New South Wales and Victoria, as well as Tropical Cyclone Yasi, which hit northern Queensland. The influence of these La Niña events has dramatically altered the warmer months over much of Australia in recent times, but this summer most of the country can expect a return to conditions usually associated with summer in our great southern land.

The Bureau of Meteorology’s Dr Aaron Coutts-Smith noted this when reviewing the weather and climate patterns since last year’s workshop. He also took into account the climate outlook for the coming three months, based on the Bureau’s various predictive models.

“This year has again seen Australia under the influence of La Niña,” said Dr Coutts-Smith.

“Combined, the last two years have yielded both Australia’s wettest 24 month period on record and the wettest two calendar year period. We’ve seen a new record average rainfall, 1411 mm in 2010-2011, which is 4 mm more than the previous record average from 1973-1974.

“The latest La Niña resulted in cooler than average maximum temperatures between January and March 2012 across most of the country, with the notable exceptions of Tasmania and south west Western Australia. “But since April, the breakdown of this La Niña has seen a return to drier weather across southern Australia,” he added.

There will not be a La Niña this summer.

“The indicators have been trending towards the development of an El Niño, although if we do see a return to El Niño conditions, it is likely to be a weak El Niño,” Dr Coutts-Smith said.

The Bureau’s official spring seasonal outlook indicates an increased chance of below-average rainfall in central to south east South Australia, southern inland New South Wales, northern and eastern Tasmania and much of Victoria. In contrast, a wetter spring is more likely in south west Western Australia, southern Queensland and north eastern New South Wales. This is a result of emerging warmer than normal waters in the tropical Pacific Ocean and persistent warmer than normal waters in the Indian Ocean. The maximum temperature outlook shows an increased chance of a warmer than normal spring in eastern South Australia and the eastern states.

All workshop participants noted throughout the two-day meeting that while large areas from the Great Dividing Range through to the west coast face above-average conditions, it is critically important to note that Australia is one of the most fire-prone environments in the world.

Paul Brockhoff from Victoria’s Department of Sustainability and Environment made it clear that average fire conditions across Australia can still produce fast-running and destructive fires.

“It’s critically important to remember that average fire potential will still yield the possibility of serious fires. Fires are part of the landscape; we will still experience hot weather and total fire ban conditions, and we may still encounter fast-running grass fires.”

Ralph Smith of Western Australia’s Fire and Emergency Services Authority (FESA) noted that producing the seasonal outlook is a scientific process, and a number of factors are taken into account in assessing the bushfire risk for certain areas.

“The methodology that we use is to look at the rainfall deciles and the vegetation types by interim biogeographic regions,” he said.

A decile is a statistical technique that ranks sorted observations into 10 equal groups. A decile rainfall map will show whether the rainfall is above average, average or below average. Interim biogeographic regions are made up of groups of interacting ecosystems that are repeated in a similar form across the landscape. Australia is divided into 89 of these regions.

“From this we work on a table that gives us different interim biogeographic regionalisation for Australia, Bureau of Meteorology regions and vegetation types, such as woodland forest, shrubs or grass. From this we can work out the fire potential for each area.”

The shaded areas are drawn generally rather than specifically—it is meant to be a broad-brush map, not one that tries to predict the outlook for particular towns or shires. As such, no cities or towns are named on the map.

In Western Australia, above-average fire potential is expected across the Mid-West, Desert and arbor regions as a consequence of high fuel loads from extensive rainfall, which have resulted in very high annual grass growth. In the south west, the bushfire potential is also above average as a consequence of reduced rainfall, soil moisture deficit and high fuel loads. Prescribed burning operations have also been hampered because of the weather. The Wheat Belt is expecting average bushfire conditions.

South Australia is forecasting above-average fire potential in the western part of the West Coast, North East Pastoral and North West Pastoral districts due to abundant and continuous grass fuels. For the remainder of the state, including the southern settled areas, the most likely scenario is for near average levels of fire activity.

Current grass fuel levels throughout Queensland are considered abundant and continuous. The grasslandshave cured rapidly because of below-average rainfalland temperatures, and extensive frosts. Fast running,high-intensity grass fires can be expected over mostof the state, with southern and western Queensland ofparticular concern. This includes the grasslands andpastures incorporating the areas from Stanthorpe andthe Granite Belt district, north to Toowoomba, Dalby,Miles and Taroom, west to the South Australian borderand south to the New South Wales border.

Above-average rainfall for much of the last two years has resulted in heavy grass fuel loads across New South Wales and the Australian Capital Territory. This incorporates the grassland areas west of the Great Dividing Range, the Tablelands, the Upper Hunter and the far west. Winter frosts and snows have increased curing rates, so above-average fire potential is predicted in the Monaro region and Murrumbidgee corridor. Forested regions east of the Great Dividing Range, including the southern slopes, are expecting average conditions.

Victoria is expecting an average fire season, although it is important to note that fast-running grass fires occur in Victoria every year. Key grassland areas that authorities are monitoring include the Mallee, Wimmera and the south-west. With warmer and drier conditions expected over the coming months, ideal growing conditions will be present for grass throughout Victoria. This will be the main contributor to the fire hazard, beginning in the west.

Normal to below normal fire potential is expected for the fire season up until the New Year in Tasmania. Large fires may be possible in grasslands in the late summer due to retained thatch combined with expected spring growth. The Moorlands are currently wet so the fire potential has been assessed as normal.

Attendees at the northern and southern workshops included representatives from: