A guide to the skies 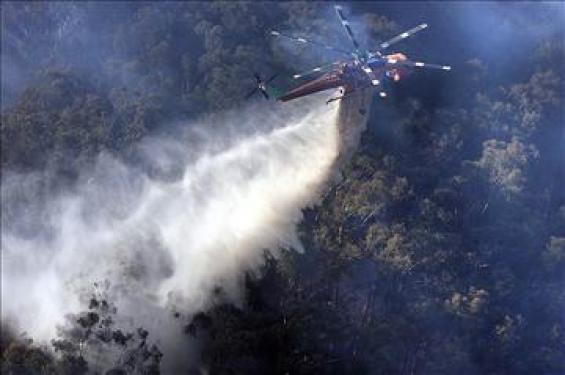 A new tool developed by a Bushfire CRC researcher from CSIRO Sustainable Ecosystems sets aside the operational support roles of planes and helicopters, and focusses squarely on the attacking role of bombing aircraft, and how they might best be used to deliver fire suppressants including water, foam, gel and retardant.

The Fire Containment Calculator is a computerised guide to the probability of fire containment with ground and aerial firefighting resources, and is specifically designed to assist decision-makers throughout Australia to evaluate the chance of containing a single fire with and without aircraft.

Based on models developed from data collected from surveys of more than 500 fires that used aircraft at a range of locations in Australia between 2004 and 2008, the research was part of a Bushfire CRC research program: Safe Prevention, Preparation and Suppression. The project – Evaluation of Aerial Suppression Techniques and Guidelines – was led by Dr Matt Plucinski of CSIRO Sustainable Ecosystems, who had the task of investigating the effectiveness of aerial firefighting for suppressing bushfires, using data obtained from both real bushfire fighting operations and experimental fires.

“The process started with collecting data from people in fire operations, including complementary data on fuel weather and topography, and using this to develop logistic regression models for predicting the probability of fire containment with ground crews and aircraft, then ground crews alone,” Plucinski said. “I think the result will be useful for fire managers.”

The result is, in a way, a quick reference guide for the best deployment of resources, using information such as fire danger index and response time.

Plucinski and his colleagues collected data on each fire including an expert assessment of whether fire containment could have been achieved within 2, 4, 8 or 24 hours of first suppression work without aircraft, which is what ground suppression models are based on. The predictions generated are tailored to fit forest, grassland and shrub environments. In addition, they can be used to prioritise the deployment of aircraft when there are multiple fires.

“I had the data, and it seemed like a great way to utilise that information,” Plucinski said. “I knew there were existing guides for other applications that used graphs and tables to present results, but I thought something more computer-based would be useful and could be more specific and perhaps make better predictions and the agencies involved agreed.” 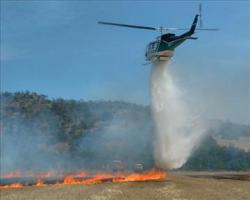 The estimated probabilities of fire containment can also be used as an indication of how many resources are required. If the probability of containment is low and the fire is in a high risk area, for instance, this may prompt dispatchers to send more resources than would normally be deployed in order to contain the fire as quickly as possible. In contrast, it may be realistic for fires burning in remote areas to be contained within 24 hours.

The tool was originally developed on paper as a Fire Containment Guide, but the newer Fire Containment Calculator can use additional information about flame height and area already burnt to provide a more accurate assessment of probabilities, something Plucinski believes will have added value in the field.

“It was a fair bit of work – definitely a large undertaking – and it’s being evaluated right now by AFAC’s Rural and Land Managers Group. The group has high expectations that it will assist them to make the right decisions. Some of their members will test it this summer and see how it goes, and this may lead to some modifications,” he said. “It doesn’t answer all our questions regarding when to deploy aircraft – it’s about what we can do with the data we’ve got – but it is a step in the right direction.”

Deploying aircraft to fires – where the Fire Containment Calculator fits

Step 1 - Assess practicality - Are aircraft an option? Consider issues such as aircraft availability, weather, and safe flying conditions. If the conditions are not practical, go straight to Step 6.

Step 3 - Consider community impact - Is there a risk to life, property or environment that aircraft could lower?

Step 4 - Task the aircraft - Can aircraft be integrated with other resources in the incident action plan?

Step 5 - Address sustainability issues - Have other issues – such as the needs of ground support and air operations teams, community information and cost – been addressed?

In recent years, considerable attention has been given to suppressing bushfires with aircraft. While the public has strongly identified aerial programs with successful bushfire suppression and called for greater investment in aerial technologies, public policy makers and fire agencies have been keen to more fully understand the cost and the effectiveness of using aircraft for firefighting operations. 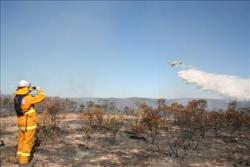 Examining the effectiveness of aerial suppression techniques was a team led by Bushfire CRC’s Program Leader Jim Gould of CSIRO, who found that the effectiveness of aerial suppression for fire containment depended on factors such as the time delay between detection and initial attack, weather (summarised by the Forest Fire Danger Index), fuel hazard and the size of the fire. The key findings – after taking these factors into account – were that aerial suppression can be effective in providing support to ground crews and can improve the probability of first attack success by up to 50 percent or more if the forest fire danger index (FFDI) is in the low, moderate or high classes. (The FFDI is an index of weather severity designed to indicate the chance of a fire starting, its rate of spread, its intensity and the difficulty of suppression.

Also, for aircraft to provide effective assistance, they must be available at call, rapidly dispatched with minimal travel distance, and with logistical systems in place. Air operations must be effectively integrated into the incident management structure and competent personnel must be available to direct the operation. The main point identified by the research was that the best outcome is produced by the use of aircraft for first attack until ground resources reach the fire.

With regard to the economic question, a team led by Bushfire CRC’s Program Leader John Handmer, Director of the Centre for Risk and Community Safety, RMIT University, and Gaminda Ganewatta, a former Research Fellow at the Centre for Risk and Community Safety (now at Deakin University), conducted research aiming to help fire agencies identify the most cost-effective combination of suppression resources for minimising the impact of bushfires, and place that evaluation within an economic framework. Their research found that aerial support in combination with ground resources was the most efficient approach, although sole use of aircraft is economically justified in the event that other suppression resources are unable to reach a fire event within a reasonably short time period (30 minutes for aircraft versus four hours for ground forces, for instance). Using limited data, the research also showed that large fixed-wing air tankers are at a cost disadvantage over other means of aerial suppression, particularly for first attack, when fires are small and where water drop accuracy is required. Indeed, the critical condition for the economic efficiency of aircraft is their ability to reach and knock down a fire well before ground crews. This buys time for ground forces to arrive and complete the containment, an advantage which is much greater in remote or otherwise inaccessible terrain. 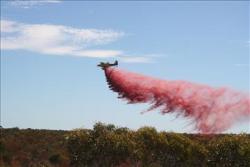 Both research projects acknowledged, however, that there are areas of aerial firefighting that need further study. For instance, there is currently insufficient data to fully examine the effectiveness of aerial suppression on different fire intensities and in different fuel types. The potential environmental benefits of aerial firefighting are another largely unexplored area of study, and the use of aerial suppression during extended attack operations or for asset protection could benefit from further investigation.

In addition to completing the Fire Containment Guide and Fire Containment Calculator (see above), Dr Matt Plucinski of the Bushfire CRC and CSIRO Sustainable Ecosystems also produced a guide to aerial suppression drop effectiveness. This additional guide was detailed in a Bushfire CRC Fire Note (Issue 38) in September 2009, and provides a valuable consolidation of the relevant existing information on drop effectiveness, as well as a significant advance on specific topics such as drop placement, coverage, and suppression chemicals.