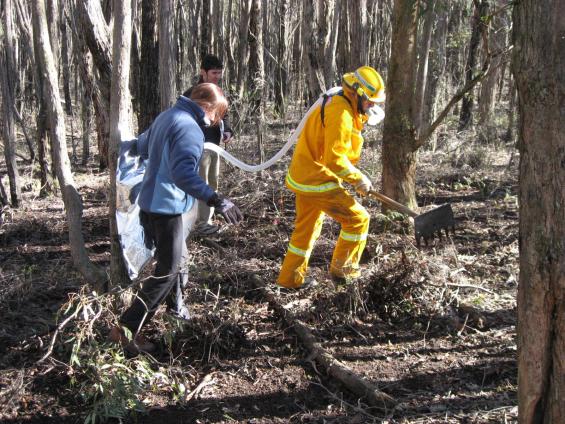 This article was published in the Winter 2011 edition of Fire Australia magazine.

Each year, thousands of Australasian career and volunteer firefighters battle bushfires in both rural and rural-urban interface areas. In doing so, they face numerous hazards, including heat, smoke, dust, noise and chemical agents. Their work often requires long working hours with periods of high-intensity physical labour. It all combines to place considerable physiological, psychological and emotional strains on a firefighter, which may result in fatigue, impaired judgement, unsafe behaviour, accidents, injuries and, in very rare cases, death.

The health and safety of firefighters is central to safeguarding the public from the annual risk of bushfires. There has been considerable work done over the past seven years under the Bushfire CRC project Firefighter Health and Safety, much of it undertaken by a team at Deakin University, Melbourne, led by Dr Brad Aisbett, a lecturer at the School of Exercise and Nutrition Sciences. Volunteer and paid staff, primarily from fire-tanker based rural fire agencies, participated in the research.

“The health and safety of Australian firefighters is essential in preparing for and suppressing bushfires,” says Dr Aisbett. “Our Bushfire CRC research examined the major health and safety risks which threaten today’s volunteer firefighting community and explored potential interventions that may help to negate those risks.”

Recent statistics indicate that approximately 220,000 people act as volunteer members of Australia’s rural fire agencies. As they are the backbone of the nation’s bushfire defences, dedicated research devised to preserving their health and safety is vital for the sustainability of this service, Dr Aisbett adds.

A review of injury statistics from three fire agencies in south-eastern Australia found the leading causes of on-duty firefighter injuries to be musculoskeletal strains and sprains, smoke exposure and heat stress.

To determine the required fitness levels of rural firefighters, the level of cardiovascular fitness associated with their bushfire suppression duties needs to be determined, he says. Fire agencies that can identify the cardiovascular fitness demands of key fire ground tasks are able to recommend the fitness levels their firefighters should aspire to in order to complete their duties safely and productively.

Thirty-six volunteer firefighters (with an average of 21 years experience) were surveyed in order to identify the type of tasks performed during bushfire suppression. The most physically demanding tasks they identified included advancing and repositioning 38 millimetre charged hoses and using hand tools such as a rake hoe or axe to create firebreaks or during blacking-out activities.

Frequent, important and physically demanding tasks are often termed critical to job performance. The critical tasks highlighted during the survey were characterised by carry, drag and dig actions. Those taking part believed that the critical tasks challenged firefighters’ endurance and strength-endurance capacities.

The research showed that bushfire suppression duties comprise intermittent periods of intense work separated by longer periods of lower level labour and/ or rest. The research also showed that the work rate for ‘critical’ fire ground tasks reaches between 70 per cent and 95 per cent of firefighters’ maximal age-predicted heart rate.

“This is classified as ‘hard’ to ‘very hard’ work by ACSM,” Dr Aisbett says. “Across a shift of 10 hours, firefighters’ heart rates were found to reach 54 per cent of their age-predicted maximum and peak at 92 per cent.”

Research investigating the durations spent at different work intensities is still in the preliminary stages. Analysis of the existing data suggests that ‘hard’ work efforts during bushfire suppression are sustained for between 20 and 180 seconds at a time and occur approximately every 13 minutes across a day-long shift. During emergency bushfires, firefighters’ heart rates have been shown to be above 70 per cent of their maximum for 15 per cent of their shift, or nine minutes every hour.

Dr Aisbett says most volunteer firefighters do not undertake fit-for-duty testing before they are deployed to the fire ground. One exception is the Australian Capital Territory Rural Fire Service, which has implemented two tests, the Pack Hike Test used to screen personnel prior to interstate deployments and the Field Walk Test (FWT) used to screen personnel for their suitability to fight fires within the ACT.

The over estimation of work intensity findings, coupled with the differences between the core movements and actions of the two tests (prolonged load carriage) compared with the movements and actions for tanker-based bushfire suppression (carry, drag, dig, rake), suggested the two tests may not adequately reflect the inherent challenges of fighting bushfires from fire tankers.

“Tanker-based agencies could consider devising and trialling fit-for-duty tests that are more representative of actual work demands than the Pack Hike Test and the Field Walk Test.”

Heat stress has been shown to be one of the top three leading causes of injury during fire suppression. Bushfires most often occur in hot, dry weather and produce extreme radiant heat. Heat stress caused by the weather conditions and the fire is exacerbated by a firefighter’s own exertion and personal protective clothing.

The combined heat load faced by rural firefighters increases their risk of developing heat exhaustion, which may render firefighters incapable of continuing their work. Heat exhaustion can be prevented or lessened by increasing cardiovascular fitness, losing excess body fat and acclimatising to work in warm to hot weather before the fire season.

A member of Dr Aisbett’s team, Bushfire CRC PhD candidate Jenni Raines of Deakin’s School of Exercise and Nutrition Sciences, conducted extensive research into the hydration of firefighters and how getting enough fluids could help stop heat exhaustion.

Perhaps surprisingly, the results showed that firefighters experienced no real benefit from drinking a prescribed 500 millilitres fluids before their shift. There were no differences in hydration status between two experimental groups, one of which was required to drink 500ml of water before their shift then drink as they felt during their shift, the other told to drink as much or little liquid as they desired.

Firefighters from both groups arrived on shift in a dehydrated state, but both groups, as measured by blood tests finished their shift in a hydrated state.
Ms Raines says the findings raise a number of questions for industries where fluid prescription and hydration monitoring are considered important.

“Firstly, firefighters are returning from their shift hydrated after consuming fluid at their own pace, which undermines the need for formal fluid prescriptions. Arriving on shift dehydrated appears to have no effect on firefighters’ productivity and physiology early in their shift – so of what benefit is there in knowing a firefighter’s initial hydration status?

“Consuming additional volumes of fluid does not provide conclusive benefits to firefighters’ physical activity, distance covered on foot, or their cardiovascular strain, however it may buffer the rise in core temperature during prolonged work in mild to warm weather.”

Based on her work, she recommends that fire agencies, during work in mild to warm weather, provide free access to both sports drinks and water for drinking, advise firefighters to consume fluid according to the dictates of thirst, not to rely on urinary markers to determine a firefighter’s hydration status and to continue awareness campaigns promoting drinking fluid for health and performance.

The Bushfire CRC work being undertaken by Dr Aisbett’s team has been well received by fire agencies.

“The work done by the Deakin University team and their volunteer subjects is a step forward in improving firefighter workplace safety,” says Tony Blanks, Manager, Fire Management Branch, Forestry Tasmania. “The research will help both employers and firefighters to resolve the apparently contradictory advice on the topic, until now mainly derived from studies conducted on people undertaking activities of little relevance to firefighting tasks.”

And Robyn Pearce, Director Human Services, Tasmania Fire Service, says thanks to the Bushfire CRC research, fire agencies are developing a sound scientific foundation for the development of future strategies to minimise the impact of fitness-related hazards facing firefighters.

“We have known for many years that we needed to understand more about the impact of the physical work, heat, hydration, fatigue and fitness on our people. Already agencies are using the outcomes of the research to start educating our people and implementing wellness strategies to help them manage their own fitness and wellbeing.”

Research into firefighter health and safety continues under the Bushfire CRC extension program under program three, Managing the Threat.