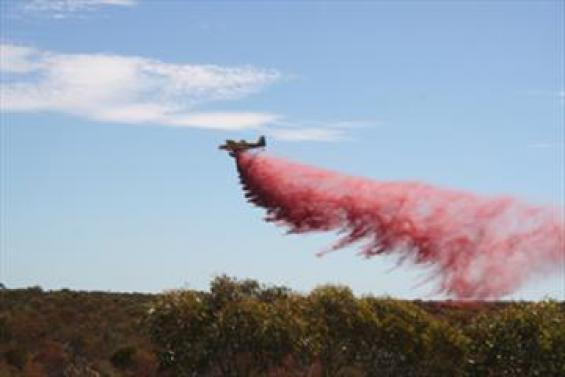 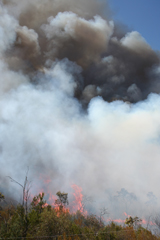 The mallee and heath landscape of Ngarkat Conservation Park in south-eastern South Australia has been deliberately set alight in one of the largest and most comprehensive fire research exercises undertaken in Australia.

The major part of the exercise was Project FuSE, a research collaboration between the South Australian Department  for Environment and Heritage (DEH) and CSIRO Forest Biosciences through the national Bushfire Cooperative Research Centre. The project is aiming to describe fuel dynamics and fire behaviour in two major fuel types – mallee and heath.

This week’s burns at Ngarkat build upon the data already gained from test burns in the area in recent years. The final output of this study will be a prescribed burning guide for areas of similar vegetation type around Australia.

More than 100 bushfire researchers and fire agency personnel from around Australia converged on the park this week for a series of controlled burns under several separate research projects designed to improve fire management in South Australia and nationally.

A total of 18 experimental fires were completed. These ranged from one to 80 hectares in size and were burnt under very high fire danger weather conditions. According to lead researcher Jim Gould, from the Bushfire CRC and CSIRO Forest Biosciences, the fires provided high quality data on fire behaviour, fire weather, aerial fire bombing, the effects of smoke on fire fighters and the fitness and health of the fire fighters.

"This week has been a unique opportunity for us to look closely at fire under dry and extreme conditions in this sort of landscape. The data we have gathered in the field and from the air will help us all to better understand and better manage mallee and heath bush that spreads from South Australia, across Victoria and into much of western New South Wales, and also in Western Australia,” he said.

This team was lead by Bushfire CRC Program Leader Jim Gould with his researchers Miguel Cruz, Stuart Matthews and Andrew Sullivan of CSIRO Forest Biosciences, plus researchers from Spain, New Zealand and Denmark.

The objectives of the 2008 burning program were to:

By conducting these studies under different weather conditions over the three years, a fire behaviour model can be constructed. This model will assist fire and land management agencies across Australia during suppression operations. It will also assist agencies to plan and safely conduct hazard reduction and ecological management burns. More than 40 experimental burns will have been conducted by the completion of the project.

Two fixed wing aircraft dropped a range of chemical suppressants (retardant, foam and gel) and the results will be compared. A third aircraft coordinated the suppression drops while a helicopter took video and infrared observations. 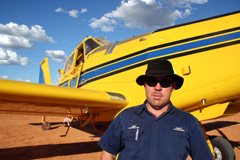 Lead researcher, Dr Matt Plucinski, Bushfire CRC researcher from CSIRO Biosciences who lead the research with Jim Gould, said the Ngarkat study provided a unique opportunity to test suppressants under controlled conditions. “Up to now we have only been able to do this sort of work in small experiments or in real bushfire situations, which limits the amount of data we can gather. At Ngarkat we could monitor the aerial drops from both the ground and from the air and compare the performance of different suppressants in several high intensity fires.”

The New South Wales Rural Fire Service was represented at Ngarkat by Inspector Sam Crothers, Aviation Operations Support Officer. Inspector Crothers was a forward ground observer for the aerial suppression trials with the task of communicating information such as drop heights, patterns and coverage levels back to the air attack supervisor.

“This research gave me valuable experience to witness the different characteristics of suppressants under extreme fire conditions. It also gave me the freedom to experiment with different drop heights, air speed and coverage levels,” he said.

Researchers analysed the composition of bushfire smoke by placing monitors on individual fire fighters as well on the back of fire trucks to better understand what fire fighters were exposed to on the fire ground. 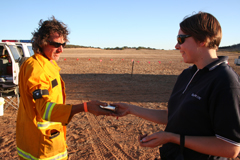 Researchers Fabienne Reisen of CSIRO Marine and Atmospheric Research and Dane Hansen Phd student at RMIT University will use the results to complement the data they have previously gathered from prescribed burns and wildfires in other parts of Australia.

The aim is to develop a strategy to manage the risks posed by bushfire smoke for fire fighters.

Crews working on the fires were monitored for the amount of physical effort they expended to see how this affected factors such as heart rate, body temperature, and energy and hydration levels. 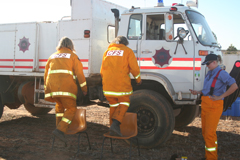 Project Leader David Nichols from the Country Fire Authority and PhD student Jenni Raines of Deakin University measured Department of Environment and Heritage (SA) firefighters before, during and after a day shift on the fireground.

They were equipped with instruments that tracked their movements, physical activity, and body-core and skin temperatures. In a makeshift testing area at the incident control centre, they conducted blood tests, and took weight and heart rate readings.

Later in the evening, and after a rest period, the fire fighters were asked to provide urine, saliva and blood samples prior to taking short cognitive and physical function tests. The tests will provide excellent baseline data for developing fatigue, hydration and fitness guidelines.