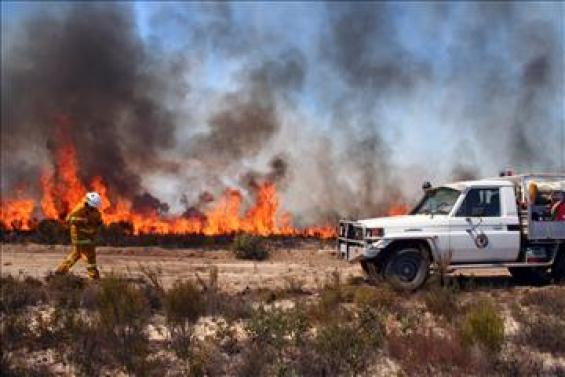 Creating a realistic computer representation of a bushfire moving across the landscape is the goal of a project being implemented this fire season in Victoria.

Phoenix RapidFire – a new Bushfire CRC software that maps bushfire potential – is being trialled in Victoria as it endures what is expected to be a dry, hot summer. The longer term view is to help agencies across Australia prioritise how they deploy resources to suppress bushfires. 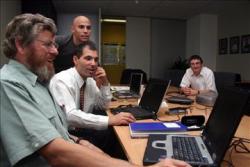 The Black Saturday fires made international headlines last February when hundreds of fires lit up the state, destroying homes, infrastructure and livestock, and claiming 173 lives. It is hoped that Phoenix RapidFire, a software-based bushfire characterisation model designed by Bushfire CRC Researcher and Project Leader Dr Kevin Tolhurst of the University of Melbourne, will help quantify how management decisions by fire agencies can change the nature of fire in the landscape, either in size, intensity or number, if faced with such circumstances again.

The project has been developed over a number of years, but in 2010 with additional funding from Victoria’s Department of Sustainability and Environment (DSE), Phoenix RapidFire will run on a bank or ‘cluster’ of 10 computers that will be fed weather forecast information every day at 6am. Dr Tolhurst explained that the forecast data is produced by the Bureau of Meteorology on a three-kilometre grid (which was partially enhanced by the Bushfire CRC’s research) and will be linked to and accessed by Phoenix RapidFire, which will quickly identify areas in the state that might be a priority for fire agencies.

“We would produce a coloured map of the state which identifies the areas that would potentially have the greatest losses,” Dr Tolhurst said. “Not just in terms of fire behaviour, but potential impact.”

The DSE has also set up its system so that the location and ignition time of new fires will automatically be sent to Phoenix RapidFire, which will run each fire for a six-hour period to see what the potential spread of the fire might be and what is potentially in its path. Dr Tolhurst said that agencies working to suppress fires often determine the best course of action is to keep fighting a fire when it may be more beneficial to travel 90 minutes to fight a different fire that has the potential to cause more damage. (This has been a key finding of another Bushfire CRC project examining decision-making by firefighters).

“That’s not so important if you only have one fire,” Dr Tolhurst said. “But if you have 50 fires start up in the afternoon, it helps identify which ones are of greatest priority – so not necessarily which one will be the biggest, but which one might have the greatest impact – and that will help in the allocation of resources. Often what happens in that situation is you allocate resources as fires appear, and by the time number 45, 46 and 47 appear, you haven’t got any resources left, or very few, and it could be those fires that actually end up doing the greatest damage.”

Dr Tolhurst, who has been involved in fire prediction work since 1988, said Phoenix RapidFire is a dynamic model that takes into account all the major factors involved in bushfire, and that the work breaks new ground by taking into account the limitations of different suppression techniques (from aircraft to ground crews and bulldozers), while factoring in other variables such as terrain and fire intensity.

“All of that we can build into the model,” he said. “That makes a big difference. One of the things we’re trying to quantify is, ‘What difference does it make if you actually try and suppress these fires? If you weren’t there at all would it make any difference?’ You spend millions of dollars trying to suppress a fire and you can be unsuccessful in stopping it, so what difference does suppression really make?”

The project also simulates spot fires created by the spotting behaviour of fires, which are crucial within the Australian situation.

“One of the things we saw on Black Saturday was how the spotting process interacts with the nature of the topography – where you get multiple ignitions in areas in front of the fire and you basically get a firestorm when all those fires join up,” Dr Tolhurst said. “The intensity of the fire within that zone is much more intense than a fire just running across the landscape. That’s where we saw trees snapped off like celery sticks and we saw the biggest loss of life. Our model incorporates aspects of this spot fire behaviour.”

The work has received some attention internationally. Earlier this year, Dr Tolhurst was invited to Canada to make a presentation at a spot fire modelling conference. His colleague, developer Derek Chong, who wrote the Phoenix RapidFire software code, went to Toronto in his place, where he found researchers more than receptive to the spot fire component of the Phoenix RapidFire model.

“They’re noticing how important spotting is for us, and they’re actually starting to think they ought to include a spotting component in their models,” Dr Tolhurst said. “They’ve seen spotting primarily as a breaching mechanism – Is the fire going to get across this river or that road? – so we’re well ahead of what’s happening elsewhere in that area because it’s much more important for us.”

The project, naturally, has also received a great deal of attention locally. On a mid-November day, Dr Tolhurst spoke to Fire Australia while taking a break from an engineering symposium on bushfire issues, at which he a presenter. It was a scorching afternoon – though not yet officially summer – and Tolhurst was high above Melbourne on the air-conditioned top floor of a University of Melbourne building overlooking the city, but his work frequently takes him beyond the confines of the office.

Two days earlier, he was in Kinglake – a scene of shocking devastation from the 2009 fires, where more than 500 homes were razed and 42 people were killed.

The previous day, he was visiting bushfire country in the Otway Ranges. Before that, he was doing the same in the state’s Dandenong Ranges.

“Since the Black Saturday fires, it’s just been unbelievable in terms of the media and public interest,” Dr Tolhurst said. “It’s not all about Phoenix, but the work is attracting attention.”

Dr Tolhurst is a Project Leader within the Bushfire CRC, whose mission is to enhance the management of the bushfire risk to the community in an economically and ecologically sustainable manner, and as such his work goes beyond one computer program and into a whole area of risk management, examining how resources are used by fire agencies whether for prevention, response or recovery. Phoenix RapidFire is one part of that – attempting to quantify those management decisions.

The starting point for the software was to reproduce historic fires with a high level of fidelity, making the characterisations of those fires as realistic as possible. Phoenix RapidFire now runs thousands of fires.

“What it has highlighted now is the need for a lot better input data,” Dr Tolhurst said. “The thing we’re struggling with now is actually mapping fuels around the rural/urban interface. Classically, it has been mapped as an urban area. But from a fire point of view, we want to know how deep a fire is likely to penetrate into that area – how intense might a fire be in there? So we have a need to go back and visit the way we’ve mapped some of our vegetation from a fuel point of view, so that we can compare one locality with another in terms of its level of bushfire risk. The model has, in a sense, identified a need for better data. It’s now more worthwhile spending resources to build up those layers, because you can use them. You get an immediate payback.”

Then next part of the plan, said Dr Tolhurst, is to rewrite the software as a web-based application, “so there’s one version of the software that’s maintainable,” he said, “not something sent out in boxes with an individual ID.”

With the public murmuring and fretting over the forecast for this fire season, anxiously waiting to see what happens during the predicted protracted summer, it is worth noting that Dr Tolhurst is conflicted but excited by the nearing opportunity to see Phoenix RapidFire in action.

“I think it’s very exciting in many respects, but it’s also quite scary, because I know there are all sorts of things to consider,” he said. “When you look at historic fire reports, the location where fires started and the time they started is often way out, so you know you’re often going to be modelling on bad starting data, so there are these potential glitches. What’s going to be really important as part of this process is making sure there are people who understand fire behaviour.”

“We haven’t had the capacity, in the past, to do this here,” Dr Tolhurst said. “But we’ve had the training, and now people have got to get the experience to go with it, and the model is working quite well. We’re on the right path.”