A new breed of fire researchers

The need to develop the next generation of fire researchers was one of the key reasons for the establishment of the Bushfire Cooperative Research Centre in 2003. Now, four years on, there are 31 student researchers working on Bushfire CRC projects around Australia and in New Zealand, including 27 PhDs and four masters students.

The first batch of these Bushfire CRC students are now in the final phase of completing their higher degrees. Some are already working within the fire industry, but many others will soon be seeking further opportunities within the industry.

Here is a snapshot of the new generation of fire researchers.

How a forest burns

Phil Zylstra is using a combination of lab work and field experiments to produce a fire behaviour model that looks at exactly how a forest can be expected to burn under given conditions. 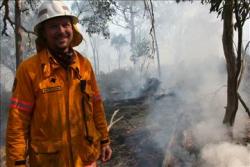 Working in the high country of southern New South Wales Phil’s model will be used to predict how a particular fire will burn and will enable fire managers to better target places and times for prescribed burns.

“Traditional Aboriginal fire managers in the Australian Alps were very specific about where, when and if they introduced fire to particular forest types, relying on a complex series of indicator plants and animals along with expert advice from individuals with responsibility for particular species and places,” explained Phil.

“Following this time, some local graziers working their snow-leases built up a wealth of knowledge specific to their area, again constructing prescriptions for the timing and intensity of burns, focusing fire on some areas and deliberately keeping it out of others.

Some of the old knowledge has survived into present management, encapsulated in terms like “scrubbing-up”; but in an age where decisions need to be science based Phil’s work is filling the need to understand forest flammability in a more complete and workable way.

Phil’s work with the Bushfire CRC and the NSW Department of Climate Change, Environment and Water is attempting to define how plants will catch fire under specific conditions, and if they do just how the forest will burn.

Phil works with the National Parks and Wildlife Service in the Snowy Mountains Region Fire Management Unit and will finish his PhD with the University of New South Wales (Australian Defence Force Academy, Canberra) at the end of 2008.

Annemarie De Vos has found that the types of face masks available for firefighters at the fire-front vary greatly in their ability to provide a shield from particulate matter and the gases present in bushfire smoke. 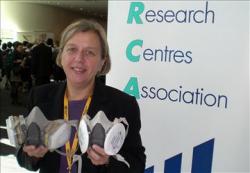 Her research, conducted with the Fire and Emergency Services Authority (FESA) of Western Australia, assessed the effectiveness of a range of protective respiratory filters worn by firefighters who are required to remain in smoke logged conditions while protecting properties from fire. This study has resulted in FESA endorsing the use of a type of filter (a particulate/organic vapour/formaldehyde filter) for its career firefighters.

There is international evidence that the presence of toxic compounds in bushfire smoke may pose occupational risks for firefighters. In particular, acute and chronic lung function impairment after exposure to bushfire smoke has been documented in the United States and Europe.

Annemarie’s study involved controlled exposure trials in a smoke chamber for up to 15 minutes, followed by trials in the field during fuel reduction burns for up to two hours. A total of 131 FESA career firefighters participated in the trials – 37 wore particulate filters (P2), 50 particulate/organic vapour filters and 44 particulate/organic vapour/formaldehyde filters. Lung function and respiratory health symptoms were assessed by a questionnaire, lung function test and oxygen measurements. Personal air sampling was also conducted inside the masks.

Withdrawing from smoke conditions is always the best action but when firefighters cannot withdraw and need to remain in bushfire smoke to protect structures Annmarie’s research showed that the particulate/organic vapour/formaldehyde filter was found to allow firefighters to work with a higher degree of comfort in smoke logged conditions.

Further research is now needed to determine the effectiveness of the filters over longer periods, such as a longer working shift or even for a full bushfire season. Annemarie’s study is part of a group of Bushfire CRC projects looking at the overall health and safety aspects of fighting bushfires.

Annemarie will complete her PhD at the School of Population Health at the University of Western Australia this year.

Adam Leavesley is investigating whether a fine-scaled fire mosaic is good for fire management as well as wildlife. 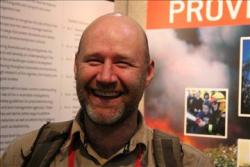 Fine-scaled fire mosaics are attractive to land managers because they are thought to provide benefits both for fire management and biodiversity.

“A lot of people think that if native bush was burnt to create lots of small patches of different ages, then that would make fire easier to control and be good for wildlife as well,” said Adam.

“The problem is that nobody has been able to show that wildlife does actually prefer a fine-scaled fire mosaic, so land managers don’t have evidence to support a burning program that would produce a fire mosaic.

“Land managers also have virtually no information about the size or shape of the patches or the time between fires that might be good for wildlife,” Adam said.

The work is being done in mulga woodlands in fire-prone Uluru-Kata Tjuta National Park in central Australia.

The park has the most comprehensive fire history in the arid rangelands and Adam has used it to find patches of mulga of different age and different time-since-fire.

“Mulga supports a diverse bird community and I’m looking for changes in the density of the birds depending on the age of vegetation and the size of the patch.

“People think that animals like the boundary between burnt and unburnt bush because there’s lots of food in the regenerating bush and there’s shelter in the unburnt bush – so I’m testing that idea as well.

“Mulga covers 20 percent of Australia so the results will help improve fire management over a good chunk of the country and will hopefully also provide some clues for management of other types of bush,” said Adam.

Adam Leavesley is expecting to complete his PhD at Australian National University by the end of this year.

Francesca Harris-Spence is looking at how local communities and organisations plan for and manage bushfires. 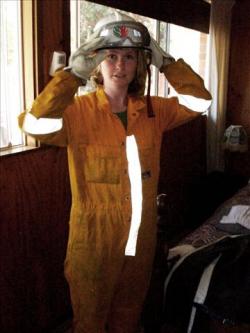 This research is examining two volunteer fire fighting brigades and their communities; the first in Norton Summit and Ashton, in the Adelaide Hills and the second in Kalamunda in the hills suburbs to the east of Perth.

This research is concentrating on how Fire Catchment Management Groups might be established and looking at their potential for better bushfire management.

Francesca is using a number of methods to collect her data including historical investigation, participant observation, 40 semi-structured in-depth interviews with firefighters, and face-to-face surveys with 322 residents in Western Australia and South Australia.

The study is painting a picture of how these volunteer groups are operating, the nature of their concerns and how they are perceived by the broader community.

Volunteer firefighters that contributed to the study strongly voiced the need to see the Fire and Emergency Services Authority of Western Australia (FESA) and the South Australian Country Fire Service (CFS) have more hands on contact with their volunteers.  Similarly, volunteers would also like to see FESA and the CFS take on more responsibility for educating the community on bushfire preparedness.

The research has reinforced the general view that volunteer fire fighting brigades are held in high regard by their local communities. However, the community does not necessarily have a clear or accurate understanding of the role of the volunteer fire brigade, often confusing them for paid fire fighters.

At the end of her study Francesca hopes to have identified the major issues in the formation and operation of volunteer community organisations in bushfire management as well as making an assessment of the advantages and disadvantages of using such groups. She hopes her model for Fire Catchment Management groups will help bushfire management at the local level.

Francesca is now in the final stages of data analysis and writing up her PhD thesis at the University of Western Australia with a view to be finished by the end of 2007. The main fire agencies partners in the study are FESA and the CFS.

Mae Proudley is conducting research on the January 2005 Wangary bushfire on the Lower Eyre Peninsula in South Australia. 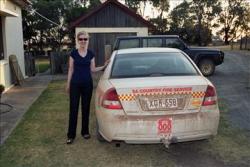 Her study focuses on the bushfire experience from a domestic perspective by exploring, through face-to-face interviews, how families respond and recover from a severe bushfire event.

The major town in the region is Port Lincoln, 650km west of Adelaide.  From September to November in 2006 Mae lived in Greenpatch, a 20 minute drive from Port Lincoln, on a fire affected farm to enhance her awareness and understanding of the impact the fire has had on the landscape and the community.

Residents from different generations, occupations and cultural backgrounds shared their unique experience of the traumatic event.  Due to the speed and ferocity of the fire most people had very little, if any, warning of the impending danger and most had close calls with the fire.

Nine of the interviewees had their homes destroyed while many others had their homes significantly damaged. Many people left in vehicles together/alone or in convoy, while some stayed and defended/sheltered.

“The aim of the study is not to judge actions but instead to explore how these decisions were made and, having survived a bushfire, what they recommend others to do,” said Mae.

“An effective way for people to learn about bushfire is through those who have actually experienced such a crisis. Their information is valuable and can be of considerable benefit to people, throughout Australia and perhaps beyond, who may one day face such a scenario.”

"The understanding of family dynamics and the types of decisions made under duress are very important as these can help shape the future education programs of our fire agencies."

Mae is due to complete her Masters at RMIT University in 2008.

Other students are working on a range of diverse projects under the direction of fire and land management agencies. Studies include: