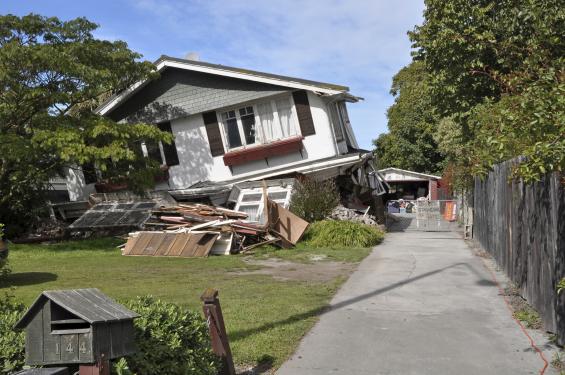 This article was published in the Summer 2013-14 edition of Fire Australia magazine.

The early start to the 2013–14 bushfire season in NSW and super-typhoon Haiyan’s devastation in the Philippines add weight to concerns that extreme weather events may become more common as the build-up of greenhouse gases warms the planet.

In October 2013 the Bushfire CRC hosted the launch of the second edition of the highly regarded Handbook of disaster policies and institutions—improving emergency management and climate change adaptation.

Authors John Handmer (Bushfire CRC Principal Scientific Adviser and Project Leader, and Professor and Director of the Centre for Risk and Community Safety at RMIT University) and Stephen Dovers (Bushfire CRC Project Leader and Director at The Fenner School of Environment and Society, Australian National University) have updated their 2007 publication to include wider coverage of climate change adaptation, which is now central to disaster and emergency planning and management.

The book makes the case that disasters, both natural and human-induced, are leading to spiralling costs in terms of human lives, lost livelihoods and damaged assets and businesses. Yet these consequences and the financial and human crises that follow catastrophes can often be traced to policies unsuited to the emerging scale of the problems and to the lack of institutional capacity to implement planning and prevention or to manage disasters. The book seeks to overcome this mismatch and to guide the development of a more strategic policy and institutional framework.

The authors build their case that the real heroes, as we head into an uncertain future, are the politicians and strategic planners who work to try to ensure that the institutional settings within which policies are formulated, developed, implemented and monitored are appropriate.

Emergency management, although clearly the necessary ‘sharp end’ of our societies’ response to disasters, will inevitably be constrained or enabled by the policy and institutional settings.

This handbook is essential reading for practitioners across the world seeking to improve the quality, robustness and capacity of their disaster management mechanisms.

The handbook can be purchased at Routledge Online.

An extract from Handbook of Disaster Policies and Institutions

Disasters, even if not large, are usually treated to intense media coverage with the consequent need for political involvement, public sympathy, and search for responsibility. Following many major climate related disasters there is now speculation, and sometimes intense debate, about the contribution of climate change to the event. Whether this is the case for individual events is of little relevance to emergency managers when responding, as they do what they can regardless of the source of the event. The relevance comes when thinking about the future.

Disasters are almost always treated as ‘events’, with media interest moving quickly to the next issue. Those affected and those concerned about strategic planning, however, may find that the impacts and implications are long lasting and extend well beyond the apparently affected area. The aim of this book is to provide a framework to help shift the focus away from the event and towards longer-term thinking about the disaster process, including issues such as vulnerability, resilience, preparedness and recovery, and changes needed to meet the challenges posed by global human and environmental change. Disasters and emergencies have many triggers other than climate of course, such as geophysical phenomena and technological failures. But the basic attributes of risk and emergency management are similar.

We might argue with the details of statistics indicating that the worldwide toll from disasters is escalating and debate the underlying causes; but there is no argument that the impact of disasters on people’s thinking and on the political agenda is much higher now than a few years ago. The Asian tsunami, Hurricane Katrina, heatwaves in Europe, infrastructure failures and destructive wildfires in Australia, the US, and Russia, transportation failures in China, Sweden and Indonesia, volcanic eruptions in Iceland and Chile, earthquakes in Pakistan and New Zealand, record breaking flooding in Australia, Europe and Asia, among many other events of every kind—and far more lesser known ones—remind us of the limits of prevention, and the political and human costs of inadequate disaster response and recovery planning. Most of all, we are becoming aware of a shortage of longer-term strategic thinking and policy.

There are about 80 million more human beings every year, and our societies and economies grow ever more complex and interdependent.

The co-location of dense human settlements with potentially devastating natural and technological hazards suggests that we should expect more disasters, or at least more events that have the potential for disaster if not properly handled. The number of humans who exist in day-to-day survival mode, if not the proportion of the total population, appears to be increasing and is probably nearly half of all humanity—defined as those surviving on less than US$2 a day (UNDP, 2006) or who live in the 60 or so countries currently directly affected by warfare or large scale violence. Such people have very limited capacity for disaster preparedness or recovery—their resources are inadequate for even their daily needs. This does not mean that people and their communities are not highly resourceful, but certainly their vulnerability to disruption is exacerbated.

Risk occupies a key position in policy debates, and risk analysis and management finds near universal use in decision-making across most areas of contemporary societies as part of regulatory, commercial and management processes. The social theorists Beck (1992) and Giddens (2000) go further and argue that modern society is better understood in terms of risk rather than, for example, class. Among other things, this acknowledges explicitly that most aspects of our lives are filled with uncertainty. However, almost every aspect of the risk concept is contested.

There are potential problems with risk-based disaster management. For example, risk assessments are usually based on historic data, which may limit their application to a future we know will be very different given rapid changes in society, economies and climate. Another issue is that much attention can go to the trivial but easily measured or conceptualised, while, paradoxically, the process may show that events that would have severe impacts, such as exotic animal diseases, import of food produced with particular chemicals, or escape of contaminants, have a small chance of occurrence and are therefore ‘acceptable’ or at least ‘tolerable’. Acceptable risk is the ‘residual’ or remaining risk. In our context, ‘acceptable’ means that emergency managers, usually without consultation, will be responsible for dealing with the residual risk, effectively removing it from public debate. The implication is that acceptance of a risk, and the benefits that this may bring, is traded off (usually implicitly but sometimes explicitly) against sound emergency management. Unfortunately, the risk analysis and management process is often performed in a mechanistic, ‘box ticking’ fashion rather than through careful analysis— further undermining its utility.

What are the essential components of a ‘disaster’ or ‘emergency’, and what constitutes ‘vulnerability’? The field, like all others, has its own jargon. Charles Fritz (1961, p655) was possibly the first to articulate a definition in the research and policy literature. Disasters are:
….uncontrollable events that are concentrated in time or space, in which a society … undergoes severe danger and incurs such losses … that the social structure is disrupted and the fulfilment of all or some of the essential functions … is prevented.

Today, we may have to accept that disasters are not capable of precise definition, especially given that we increasingly recognise that disasters may be complex in their genesis and create unexpected additional disasters as they proceed. No matter what the arguments of intellectuals or policy-makers are, the global media, epitomized by CNN, is likely to be the ultimate definer of ‘disaster’.

Disasters are subject to numerous definitions: to an investment bank, they mark an investment opportunity in the same genre as investing in shares; they may be adduced as evidence of climate change; they are research opportunities; and the livelihoods of many nongovernmental organisations (NGOs) and professionals are built on them.

Agencies and statutes also set out their definitions, but to governments, disasters offer the opportunity to legitimise themselves, to parade their power by mobilising resources, and to empathise with the victims by offering sympathy and assistance. Seen like this, disasters are social, political or economic phenomena, not visitations by some force external to human control or as a result of calculated engineering risk.