New fire commissioner briefs Bushfire CRC on the challenges ahead 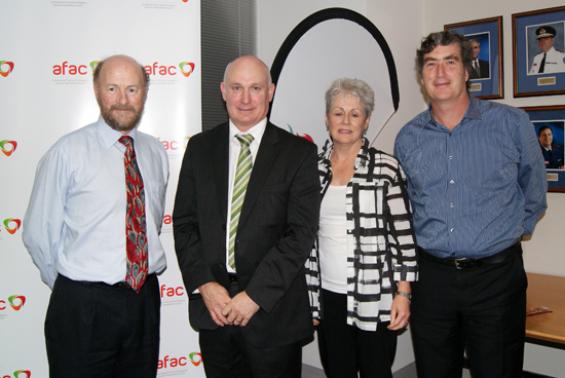 Mr Lapsley was formerly Director, Emergency Management, of Victoria’s Department of Health and Human Services and before that Deputy Chief Officer of the Country Fire Authority. He was appointed to his new role following a recommendation by the Victorian Bushfires Royal Commission for the creation of a fire commissioner as an independent statutory officer who would be the senior operational firefighter in Victoria.

The legislation creating the position, which took effect on 1 December 2010, sees him sit in seniority above the operational chiefs of the state’s CFA, MFB and DSE fire services.

“We will be a small group of people, not some big bureaucracy, who will work with the other agencies,” Mr Lapsley told his audience of staff from the Bushfire CRC, AFAC (Australasian Fire and Emergency Service Authorities Council) and the National Aerial Firefighting Centre at their joint premises in Melbourne. Mr Lapsely is pictured second from left with, from left, CEOs from the Bushfire CRC Gary Morgan. AFAC Naomi Brown, and NAFC Richard Alder.

Mr Lapsley said one of his top priorities was fire prevention across private and public land. Others included working with different organisations to ensure a clarity and consistency of policies and messages and achieving consistent incident management systems across the three fire agencies.

“A big point will be getting the three services working off common standards and training. What it’s got to be about is sustainable, long-term reforms.”