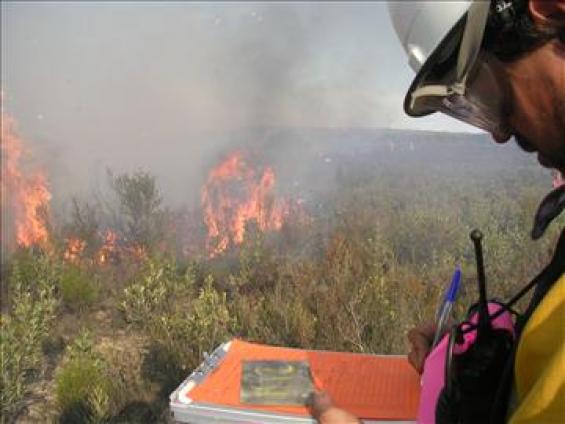 The findings of Australia’s most extensive study to date of the behaviour of high-intensity bushfires in eucalypt forests – Project Vesta – provide valuable new tools and information for fire managers across Australia.

Bushfire CRC program leader and Ensis Bushfire Research leader Jim Gould said the 10 year study provided data to develop a better system for predicting the spread and intensity of wildfires. “Existing systems for predicting forest fire behaviour work well for low-intensity fires such as prescribed burns, but can under-predict the spread of high-intensity summer fires by a factor of three or more,” he said.

“As a result of this research we have developed a new bushfire spread model for summer wildfires that will provide the basis for a national fire behaviour prediction system for dry eucalypt forests. The study also provides new information of critical importance to firefighter safety by highlighting the sudden jump in speed and intensity of a fire that takes place when a wind change turns a flank-fire into a head-fire,” Mr Gould said.

Former project leader, CSIRO Honorary Fellow Phil Cheney, says the research resulted in a number of important breakthroughs that will improve the ability of fire agencies to manage fire risk. “This study has enabled us to get a measure of factors that have not previously been quantified, such as establishing the parts of the fuel structure that influence the rate of spread,” he said.

“As a result, we now have a vastly improved understanding of the fundamental relationships between fire behaviour and all fuel types of similar structure. This enabled us to develop a new field guide for fire managers that relates fire spread to fuel structure and weather conditions across the entire country whereas, previously, fire behaviour guides were specific only to certain vegetation types,” Mr Cheney says.

Bushfire CRC and Department of Environment and Conservation bushfire scientist Dr Lachie McCaw said one of the key findings from Project Vesta is that hazard reduction by prescribed burning will reduce the rate of spread, flame height and intensity of a fire.

“Prescribed burning will also reduce the number and distance of spot fires by changing the structure of the fuel bed and reducing the fuel load,” he said. “These effects may persist for up to 20 years in forests containing rough-barked trees and shrubby under-storeys.”

Also at the launch were Project Vesta partners Neil Burrows and Rick Sneeuwjagt of the Department of Environment and Conservation.

Project Vesta has produced a brochure, a technical report and a fuel guide with fuel assessment and fire behaviour prediction tables.

The four main scientific aims of Project Vesta were:

Experimental fires were conducted in four hectare plots (200 x 200 m) at two sites with different understorey fuels ranging in age from 2 to 22 years since fire in south-western Australian eucalypt forests.

During the summers of 1998, 1999 and 2001, 104 experimental fires were lit under dry summer conditions of moderate to high forest fire danger. On each burn day sets of fires were burnt simultaneously in plots of each fuel age.

Experimental fire behaviour ranged from slow-spreading surface fires to high-intensity fires spreading more than 1000 m h-1 with sporadic crowning activity. The intensity of the experimental fires ranged from 0 (no fire spread) to 10,570 kW m-1 with flame heights up to 25 m.