New thinking lined up for conference 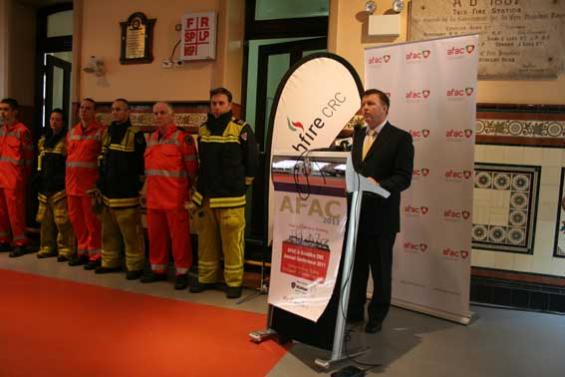 The Sydney City historic fire station No 1 was a fitting venue to launch the AFAC and Bushfire CRC annual conference that will be held in Sydney later this year, themed around ‘New World, New Thinking’.

Now in its eighth year, the annual conference has grown to be the pre-eminent knowledge sharing event for the fire and emergency service sector in Australasia. More than 1100 delegates are expected to attend from around the world with key note speakers confirmed from Europe, the UK and USA. They will be supported by national and internationally recognised experts and researchers.

Mr Gallacher  noted that the conference program covered not only natural disasters such as fire and flood, but also "man-made disasters" such as the 2005 London bombing. He said it was important to learn from a broad range of events and organisations.

"You must have dialogue with other agencies and within your own organisation and within the domestic framework of this country if we are ever going to be able continue to learn work out what has gone wrong in the past and put in place measures to prevent it occurring in the future.

"A conference such as this with well over 1000 delegates attending does show that this is the significant conference of its kind in this area."

"When you think of the world over the last couple of years and what we have seen with the fury of mother nature and earthquakes and cyclones and the impact they have on communities, it really  does seem we have shifted another gear with natural disasters  and their impact on the world.

"And I think for emergency services that requires new thinking. Not that we have been thinking old thinking in the past but we need to continually keep on top of and review how we deliver services to communities.  First of all to try to prevent them and where we can’t prevent those emergencies from occurring certainly trying to prepare communities for their impact.   Then, we have to respond to our communities when all else fails.

"So certainly, new world new thinking is an appropriate title for the conference."

The trade show with more than 100 exhibitors taking over 7000sq metres in floor space, will be the largest trade expo for the emergency services sector in the Southern Hemisphere this year.

The conference will be staged at Darling Harbour 29 August  - 1 September 2011.

The full conference program is available on the conference website www.afac2011.org.au