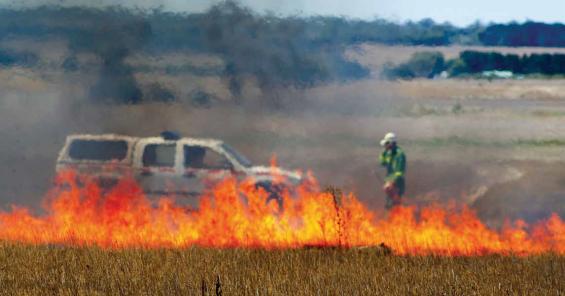 This article was published in the Winter 2011 edition of Fire Australia magazine.

Planned fuel-reduction burning remains one of the most controversial issues in managing forests and lowering the risk of bushfires to people and property. A new book takes a comprehensive look at the subject. Bushfire CRC communications officer David McLoughlin reports.

The intentional use of fire arouses passions and conflicts, write Professor Mark Adams and Dr Peter Attiwill in Burning Issues, their book on the role of prescribed burning in the sustainability and management of Australia’s southern forests. “The forest manager faces an almost insurmountable problem: people, most of whom live in the cities, have an innate fear of fire. If fire is always seen as bad, how can it be used for good?”

Indeed, concern about bushfires has in part been replaced by an urban concern about the use of planned fires for fuel reduction and forest regeneration, they say. “An urban concern that speaks as much about the increased separation of city and country, of the increasingly poor knowledge of city people as to what is required to live in and manage the bush, as it does about the discomfort of smoke-tainted washing or wine, or conscience-twanging images on the nightly news or rants in major daily newspapers by columnists and others who make a living from the media, about ‘escaped prescribed fires or back burns’.”

Professor Adams, a Bushfire CRC Board member and former project leader, is Dean of the Faculty of Agriculture, Food and Natural Resources at the University of Sydney. Fire has been a constant element of his research since bushfires burnt his PhD forestry study sites on the outskirts of Melbourne in 1982 and 1983. Dr Attiwill is Principal Fellow in Botany and Senior Fellow in Historical Studies at the University of Melbourne and editor-in-chief of the international journal Forest Ecology and Management.

In Burning Issues, they describe the history and role of fire in Australia’s ecosystems and how fire can be managed for both safety and ecological diversity, with the aim of changing public attitudes to fire and to influence and encourage changes in land management by government agencies.

They note calls following the February 2009 Victorian Black Saturday fires for a single, simple answer on fuel reduction burning to reduce risk, but emphasise it is a complex issue without a simple answer.

Nowhere is the role of fire in ecosystems more important than in Australia, they write. As the continent drifted north from Gondwanaland 130 million years ago, it became hotter and drier. The former extensive cool-temperate rainforest was gradually replaced by today’s common hard-leafed vegetation and an increasing incidence and spread of fire caused by lightning. Fire played a dominant role in the evolution of the Banksia, Acacia (wattle) and Eucalyptus that now dominate Australian forests. Fire frequency increased with the arrival of Aborigines some 45,000 to 70,000 years ago and it increased again when Europeans arrived 220 years ago.

They quote American fire historian Stephen Pyne, who has written extensively on fire in Australia and around the world: “Eucalyptus is not only the universal Australian, it is the ideal Australian – versatile, tough, sardonic, contrary, self-mocking, with a deceptive complexity amid the appearance of massive homogeneity; an occupier of disturbed environments; a fire creature.”

The diversity and productivity of forest ecosystems are maintained by random periodic disturbance, write Professor Adams and Dr Attiwill. One needs to differentiate between “disturbance” as the word is used ecologically and its use generally. “Because many species depend on the cyclic renewal of resources by fire, disturbances by stand-replacing fires are simply part of the natural order. It is the elimination of fire that should be more rightly termed a disturbance.”

They say this raises many questions. What are the social and biological aims of forest management? What levels of disturbance are biologically necessary and what levels can be socially tolerated? Can we accommodate fire and destruction within the management regime of a national park? And why prescribed burning? Does it achieve its aim of producing such specified management goals as reducing fire risk and encouraging biodiversity?

If there were no fuels for fire to burn, there would be no bushfires, the authors note, but ask if the hypothesis “fuel reduction burning decreases intensity and rate of spread of subsequent bushfires” is proven in practice.

In a bushfire, the fuel loads, weather and topography that promote fire intensity and spread are variable and to a major degree uncertain, they write. Fuel reduction burns are generally done in the cooler months when the fire can be comfortably controlled. These cool burns only consume a small proportion of total fuel that may burn under the most extreme conditions.

“Thus we have an unnerving situation. On the one hand, it is practical common sense to say that the removal of some of the fuels will result in the specified goal of reducing the spread and intensity of subsequent bushfires. On the other hand, it is often difficult to demonstrate quantitatively and scientifically that the prescribed aim of fuel-reduction burning has been achieved.”

The authors cite the work of Western Australian researchers who have undertaken substantial studies of that state’s extensive prescribed burning regime and its effect on bushfires.

Before the devastating Dwellingup fires of 1961, Western Australia had used fuel-reduction burning on only a small scale. Since then, however, major fuel-reduction burns have been undertaken yearly, with the state’s Department of Environment and Conservation (DEC) currently aiming to burn eight per cent of forested Crown lands each year. By comparison, prior to the 2009 Victorian Bushfires Royal Commission – which heard detailed evidence of the WA experience – other Australian states were burning as little as two per cent of their publicly managed forests.

DEC fire management branch state manager Rick Sneeuwjagt told the Royal Commission that Western Australia had not had a major wildfire between 1961 and 2009 despite bad fire seasons. About 95 per cent of fires had been kept below 100 hectares and no lives had been lost.

Professor Adams and Dr Attiwill write: “For many fire ecologists and fire researchers ... the fuel-reduction program in the forests of south-western Western Australia has set the benchmark in how it should be done and what can be achieved.”

After hearing the Western Australian evidence and from a forum of seven experts that included Professor Adams, the Royal Commission’s final report recommended Victoria commit to a long-term program of prescribed burning based on an annual rolling target of a minimum of five per cent of public land.

In Burning Issues, Professor Adams and Dr Attiwill note that prescribed burning has been a controversial topic not just among those with interests in the management of public land, but also among fire ecologists. However, during the Royal Commission’s six days of hearings on the issue including the experts’ forum, there was a surprisingly high level of agreement.

“The experts’ forum reached the consensus view that between five per cent and 10 per cent of public land should be burned for fuel reduction each year,” they write.

Burning Issues contains a set of key concluding points making a case for fuel-reduction burning. Fire is a natural element of Australia’s ecology, the authors say. Given the right conditions, Australian bush is highly flammable. We are unable to eliminate bushfires and widespread, high-intensity bushfires will not reduce unless we recognise the need for intensive fuel-reduction programs. The evidence for planned fire management is overwhelming in Australia and world-wide, they say. Technology is now available to manage fire in a way that maintains biodiversity and markedly reduces the hazard to human life and property. We must develop well-defined fuel-reduction burning programs. Properly managed fuel-reduction burning causes far less damage to life, property and ecological processes than intense, uncontrolled bushfires.

Dr Richard Thornton, Bushfire CRC Deputy Chief Executive and Research Director, welcomed the publication of Burning Issues, saying the book provided a valuable insight to the state of knowledge of the prescribed burning field by two well-respected authorities in the field.

“As the authors note with their observation that it is a complex issue with no simple answer, this book, although not providing the silver bullet, will form a central part of the future debate,” Dr Thornton said.

This project is being conducted over 12 months from July 2011 and will be led by Professor David Pannell of the University of Western Australia. The project will use one or more case study areas, to be selected following a call for expression of interest open to all Bushfire CRC stakeholders.

Noting that one of the key recommendations of the Victorian Bushfires Royal Commission was to significantly increase the levels of prescribed burning, Bushfire CRC Chief Executive Officer Gary Morgan said it was well known prescribed burning was inherently risky and likely to have both positive and negative effects.

“The new research project will integrate research information on fires, ecology, human behaviour, values and economics,” said Mr Morgan. “This is the first time such a process encompassing different disciplines has been conducted on this land management issue.”

The research approach is based on experience in developing and applying INFFER (Investment Framework For Environmental Resources) which has been trialled and used by almost half of Australia’s 56 regional natural resource management bodies. INFFER won the Eureka Prize for Interdisciplinary Research in 2009, and elements of the INFFER project have won awards for excellence from the Australian Agricultural and Resource Economics Society and the UK Agricultural Economics Society.

“We are delighted that this process will now be tested against the questions raised in prescribed burning,” Mr Morgan said.

Professor Pannell is Winthrop Professor in Agricultural and Resource Economics at the University of Western Australia, Director of the Centre for Environmental Economics and Policy, and a Federation Fellow of the Australian Research Council. He specialises in interdisciplinary research to address complex decision problems.

Dr Thornton welcomed Professor Pannell to the Bushfire CRC’s team of researchers, adding that it was a great privilege to have such a highly regarded researcher working on critically important issues for the industry.