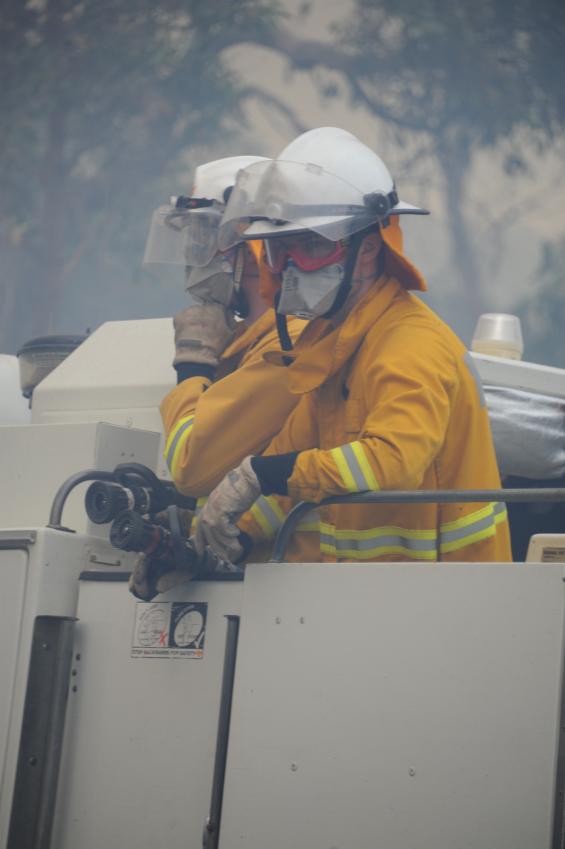 This article was published in the Autumn 2014 edition of Fire Australia magazine.

Bushfire CRC research has helped to understand what is in the smoke, particularly smoke from bushfires at the rural–urban fringe.

It is a hazardous scenario that bushfire firefighters in Australia and overseas face more frequently as population growth pushes residential development into rural areas. At the rural–urban interface, bushfire firefighters are exposed to smoke from not just vegetation, but from combinations of burning houses, cars and other materials. And bushfire firefighters are less likely than city firefighters to be wearing breathing apparatus. This means they may be more vulnerable to health risks posed by burning organic compounds that have been, until now, mostly unmeasured.

Recent research by Bushfire CRC scientists is meeting the urgent need for precise information about these risks by identifying, measuring and modelling these toxic emissions more accurately than ever before. In what is believed to be a world first, the research has developed models that can assess in fine detail scenarios of multiple houses burning on the urban fringe.

Dr Reisen’s rigorous simulations have identified and measured a broad range of the compounds commonly encountered at rural–urban interface fires. Quantifying the risks they pose to health was the next challenge, resulting in an innovative modelling project that was a collaboration between Dr Michael Borgas and Dr Reisen. Both are based at CSIRO Marine and Atmospheric Research. Emissions characterisation and the dispersion model that determined exposure estimates and assessed exposure risks were interlinked components of this major project.

Dr Reisen said the potential health effects of these toxic emissions to both firefighters and the community range from the relatively minor, such as nausea and respiratory irritation, to life threatening, including asphyxiation, because the emissions contain known human carcinogens.

Dr Reisen’s earlier literature review covering rural– urban interface combustible materials had found that most of the material was wood and wood-based products, followed by polymeric materials. Her recent emissions project devised laboratory-based simulations to burn samples of synthetic or constructed materials such as particleboard, medium-density fibreboard, carpet and polyurethane foam, which all contain a significant fraction of nitrogen.

“All of these are potentially harmful to people’s health.”

Dr Reisen evaluated emissions from all materials tested against those from pine, a natural, widely used construction material.

Interestingly—and perhaps alarmingly—the study found that ever-present domestic materials, such as polystyrene and polyester, produced some of the highest concentrations of hazardous emissions. Carbonyls, a class of irritating volatile compounds, were one example, with polystyrene producing emission factors for total carbonyls that were 45 times higher than those for pine.

“This means that the combustion of these products in fires at the rural–urban interface is likely to be a greater health risk than forest bushfires.”

Her toxic emissions results were used in modelling that translated the emissions into exposure estimates— to quantify the health risks that the smoke poses.

This involved developing new, detailed models of both dispersion and wind behaviour to take into account the chemical emissions from multiple and complex sources and to determine where high-risk exposure zones may be.

The exposure risks increase close to the emission sources and from short-term peaks of high concentration.

This allows more targeted estimates of house-specific local emissions, rather than averages over the footprint of the house or suburb.

“The models of both wind and dispersion are simple and flexible enough to be useful for assessing exposure scenarios and to use in the field in emergency response situations,” she said.

Dr Reisen said the research had yielded much greater understanding of the exposure from airborne pollutants—knowledge that could be applied in a range of ways. Estimating toxic load and health risks for firefighters breathing air with intermittent high peaks of toxic emissions was one example.

“It’s also applicable for use in sensors to detect exposure concentration levels downwind and models that more accurately estimate the source emissions,” she said.

Project lead end user Robyn Pearce, Director Human Services at the Tasmania Fire Service, believed the cumulative knowledge from the research would have significant health and safety benefits for bushfire firefighters. This in turn would influence both firefighting practices and deployment of safety equipment.

“Once fire agencies have information about the actual exposures and their likely spread at rural–urban interface fires, they will be better placed to deploy firefighters more safely, as well as provide advice to the community,” she said.

“This will enable everyone to better protect themselves from the hazards of smoke.”

Access the full Operational Readiness of Rural Firefighters (Air Toxins) report, as well as Fire Notes on the research.