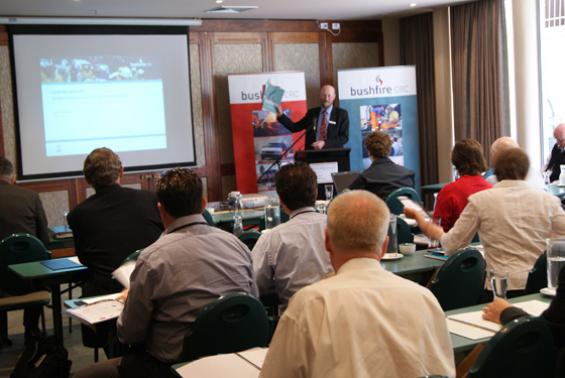 A busy and informative program occupied attendees at the Bushfire CRC Stakeholders Council Annual General Meeting in Melbourne on 23 November.

The meeting voted to accept two new members to the Bushfire CRC – the University of Wollongong and Central Queensland University – and participants were provided with an update of the financial status of the centre. The chairs of the Governing Board committees delivered progress reports.

Stakeholder representatives were informed of the actions now being undertaken to secure long-term ongoing funding for fire research. A lengthy discussion followed on how each partner could best provide support.

Among highlights of the rest of the meeting were reports from end users of Bushfire CRC research projects.

John Schauble from the Office of the Fire Services Commissioner, Victoria, is a lead end-user of the Effective Communications: Communities and Bushfire project. The research teams did not come from the fire industry, he said, which brought a fresh set of perspectives from such disciplines as sociology, psychology and political science.

“As a lead end-user I’ve found myself mentoring students from various projects which is one of the strengths of the CRC.”

Deputy Chief Officer of Melbourne’s MFB David Youssef and a Risk Assessment and Decision Making lead end-user said this was the largest and most complex of all Bushfire CRC projects. It sought to develop a computer-generated wildfire assessment tool for incident management teams, leveraged from Phoenix RapidFire and other earlier Bushfire CRC projects on fire weather, house protection and smoke dispersion.

Present computer speeds were insufficient for real-time use but that would evolve, he said. It was planned to have a model to run as a trial by the end of the current Bushfire CRC extension in 2013.

Economics and Future Scenarios lead end-user Andrew Stark of the ACT Emergency Services Agency said the project’s researchers were looking at such issues as the personal and economic reasons people built homes in bushfire-prone areas.

They were also looking 40 years into the future, when Australia’s population would have doubled, temperatures were expected to be higher, to produce scenarios to test against future conditions.

Fire in the Landscape lead end-user Neil Cooper of ACT Parks said most of the projects focused on controlled burning, looking at implications for carbon and water supplies.

“In future we will have to do large areas of fuel reduction burning so we are looking at how much carbon there is in the landscape before and after the burning. Actions need to be underpinned by good, sound science and there are big gaps.”

Other highlights of the meeting were presentations by three Bushfire CRC PhD students (pictured left), the recently submitted Claire Johnston and Briony Towers, and James Minas, who is mid-way through his studies. Sandy Whight from Tasmania Parks and Wildlife Service talked about utilising Bushfire CRC researcher expertise to conduct a staff ride and training video. David Caporn (FESA) spoke about researchers assisting in the evaluation of community behaviours during the fires in the Perth hills earlier this year.