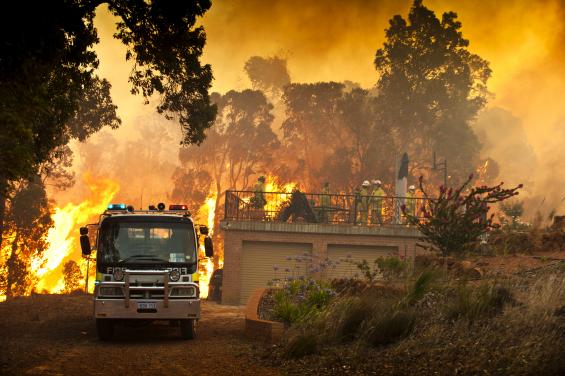 This article was published in the Winter 2013 edition of Fire Australia magazine.

A new science-based fire danger rating system is being developed by the Bushfire CRC, working with the Attorney-General’s Department and all states and territories.

Across Australia, fire agencies use the Forest Fire Danger Index (FFDI) and Grass Fire Danger Index (GFDI) to assess the risk of fire. These indices describe the conditions that allow fires to start and continue burning, taking into consideration the basic weather conditions. They were developed largely in the 1950s and 1960s to determine the risk posed to forestry assets. They were not developed to assist in warning the community, and they do not account for all fire risk factors. For example, topography, fuel availability and fire location are not included in either the current FFDI or GFDI. This means that the indices cannot give a complete account of the potential fire danger in today’s world, allowing for appropriate risk management and firefighting decisions.

But this is changing. Two years into a multiyear research project, the Bushfire CRC, the Commonwealth Attorney-General’s Department and all states and territories are working to implement a new scientifically based fire danger rating system. The project is part of the Australian Government’s $3.6M National Emergency Management Program, with the Bushfire CRC contracted to complete the research.

“The goal is to implement a versatile, scientificallybased fire danger rating system that can be used by each state and territory. It will use the most up to date science to provide timely and meaningful warnings to the community of the impending level of bushfire danger,” said Michael Pahlow, Assistant Secretary of the Attorney-General’s Capability Development Branch.

Toward a public warning system
Putting this into perspective, the current fire danger rating system is used by the fire agencies and the Bureau of Meteorology to communicate fire danger warnings to the public. Additionally, fire agencies determine the need for Total Fire Bans, which in turn enables agencies to determine the resource levels needed to manage fires and protect people and community assets.

However, the current system has significant limitations, with the science behind it not sufficiently robust. Nor does it account for all the factors that are now available for calculating risk, making it only partially fit for the purpose required.

The new fire danger rating system will use a series of discrete modules to calculate aspects of fire risk. These modules will measure:
• fire weather indices such as landscape moisture and atmospheric conditions
• fire behaviour indices such as terrain and fuel characteristics
• fire damage indices such as measures of vulnerability and extent of exposure to fire
• ignition factors such as fire history and ignition mechanisms
• social factors such as the potential impact of fire on communications and the community.

“This is a nationally significant research project.
“While the Royal Commission findings were largely based on the Black Saturday bushfires, its recommendations encompass the nation. The research is helping to forecast fire risk in a much more accurate way.”

The fatalities factor
Reflecting the need for the new fire danger rating system to indicate the potential for damage to a community, analysis of the 825 known civilian and firefighter fatalities recorded from 1901 to 2011 has been undertaken in partnership with CSIRO. This is the most comprehensive dataset of these fatalities ever assembled.

The analysis of these fatalities has focused on the relationship between where the death occurred, the arrival of the fire to that location, weather conditions, proximity to fuel, and the person’s activity and decision-making leading up to their death. From this analysis it is evident that fire weather and proximity to bushland are very strong drivers for defining the potential for fatalities to occur.

By the very nature of life in Australia, our culture includes several iconic bushfires that have all occurred under very severe weather conditions. Black Friday in 1939, Ash Wednesday in 1983 and Black Saturday in 2009 were all horrific bushfires that have made their mark on our way of life. Australian bushfire fatalities are dominated by fires like these. So much so, that in 110 years, 65% of all civilian fatalities have occurred on just ten days.

Dr Thornton believes we need to know more about the days on which these large number of deaths occur.

“Combined with the ability of being able to issue fire danger ratings to individual towns, increasing our understanding of these large events will allow for a substantial advancement in being able to not only help communities understand their level of fire risk, but communicating that lives could be lost should we see conditions like those that were experienced on Black Saturday,” he explained.

As well as taking fatalities into account, the new system also needs to be able to integrate the probability of property loss. Work in this area is being undertaken with the assistance of the Centre for Risk Management of Bushfires at the University of Wollongong. This study aims to deliver a spatially explicit framework capable of generating daily maps representing the distribution of the probability of property loss down to an accuracy of 10 km. This will further allow fire agencies to better target warnings and community advice.

Part of this has been achieved by calculating the long-term average for a comprehensive set of fire danger indicators, undertaken by the Bureau of Meteorology. These data take in the period from 1979 until now, representing the most complete nationwide assessment of fire weather ever undertaken in Australia.

Dr Thornton says this as a major advancement in fire weather science in Australia.

“This will highlight which indicators are the best predictors of bad fire-risk days across the country. The time elapsed since our current system was developed is large, and the leaps in the science great. Our knowledge will be greatly improved if we can more accurately predict days like Black Saturday even further ahead than we can now.
“The next step is then to try to determine a better index to capture these factors,” he said.

The summary reports taking in Australia’s bushfire fatalities, the probability of property loss and fire danger indicators are now available on the Bushfire CRC website by searching for ‘fire danger rating review’.