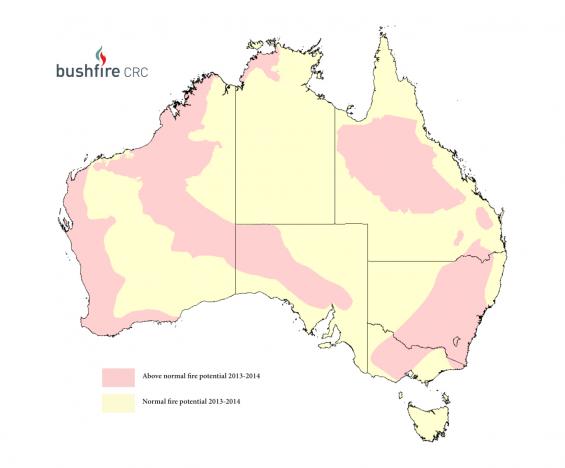 Large areas of southern Australia, especially along the east and west coasts extending inland, face above normal fire potential for the 2013-2014 fire season, despite the extensive fires in some parts of the country over the last 12 months. However, the area most at risk does not extend right across the country, as was seen in 2012-2013. View the full outlook in Fire Note 116.

The above normal forecast is due to abundant grass growth across inland Australia, due to above average rainfall since May 2013. These conditions, coupled with above average temperatures across the country since January 2013, have resulted in a build up of fuel in grasslands. These higher temperatures have also seen forests begin to dry out. Elsewhere across southern Australia, the fire potential is considered to be normal for 2013- 2014, but normal fire conditions can still produce fast running fires. The above map combines the southern bushfire outlook with the northern bushfire outlook, which was released as Fire Note 113 in July. This seasonal bushfire outlook takes into account the bushfire potential through to 2014.

The Outlook is an output from the Bushfire CRC, which brings together fire managers with climatologists and meteorologists from across Australia each year to discuss fire potential across the country.