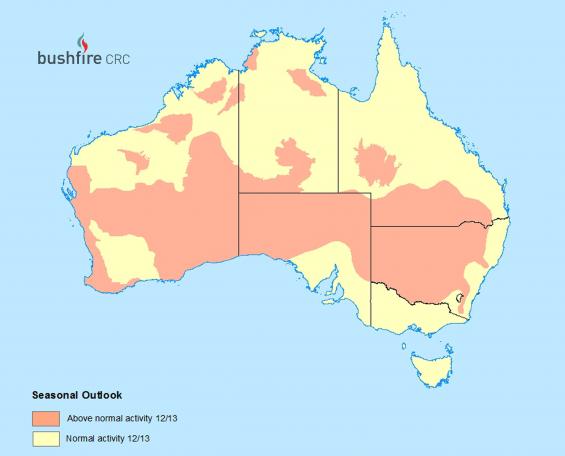 The Southern Australian Seasonal Bushfire Outlook 2012-13 has been released as a Bushfire CRC Fire Note. Visit the Fire Note page to see the Outlook.

Large areas of southern Australia, from the east coast to the west coast, face above average fire potential for the 2012-13 fire season, despite the extensive fires in some parts of the country over the last 12 months. However, the area most at risk does not extend as far north as was seen in 2011-12. The above average forecast is due to the abundant grass growth from the high amount of rain from two strong La Niña events seen in the past two years across the eastern seaboard and South Australia. Fuel moisture content within forests is still high, but this rainfall has continued to provide widespread vegetation growth in the grasslands, which remain a threat.

In Western Australia, above average fire potential is expected across the South West, Mid-West, Desert and arbor regions.

Above average fire activity is predicted in the western part of the West Coast, North East Pastoral and North West Pastoral districts of South Australia due to abundant and continuous grass fuels.

Current grass fuel levels throughout Queensland are considered abundant and continuous. As a consequence, fast running, high intensity grass fires can be expected over most of the state, with particular concerns for southern and western Queensland.

In New South Wales, above normal fire potential has been assessed for grassland areas west of the Great Dividing Range, the Tablelands, the Upper Hunter and the far west.

Above normal fire potential is predicted in the Monaro region and Murrumbidgee corridor of the ACT and south eastern New South Wales.

Victoria is predicting an average fire season, although key grassland areas authorities are monitoring include the Mallee, Wimmera and the South West.

Tasmania is expecting normal to below normal potential is expected for the fire season up until the New Year. Large fires may be possible in grasslands in the late summer.

The Outlook is an output from the Bushfire Cooperative Research Centre which brings together fire managers from across Australia each year to discuss fire potential across the country.