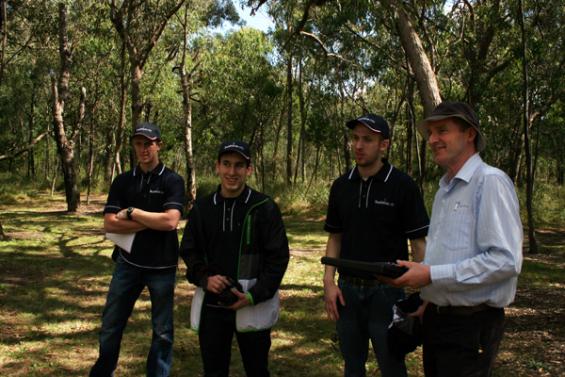 Three visiting US students sponsored by the Bushfire CRC are looking at the bushfire threat posed by large parklands in urban areas.

Blackburn Lake Sanctuary lies in the middle of Melbourne’s urbanised east. A forested oasis amid a fairly typical Australian heavily populated suburban landscape. Its many paths criss-cross old remnant bushland and small patches of regrowth after several fires in recent decades. The area is of particular interest as it resembles an urban-rural interface but is completely surrounded by Melbourne’s suburbs, including a primary school and an aged care home.

The Bushfire CRC and the Centre for Sustainable Organisations and Work at RMIT University are hosting three students from the Worcester Polytechnic Institute (WPI), which specialises in fire safety and protection, to engage in research on bushfire and community engagement at the urban-rural interface.

The exchange is running for eight weeks through to May 2013 and the students -Stephen Kocienski, Nataniel Lobel and James Everett -are receiving supervision from Prof Peter Fairbrother and his staff working on the Bushfire CRC project, Effective Communication: Communities and Bushfires.

The research is investigating bushfire awareness and preparedness of the residents living in areas surrounding Blackburn Lake Sanctuary, as it is unlikely that these residents are targeted in public bushfire communication and education campaigns. They will interview local residents and community groups.

Since 1998 WPI, located in Worcester Massachusetts, near Boston, has each year sent two dozen students to Melbourne for two months to conduct interdisciplinary research projects on a wide variety of topics. Past local sponsors include AFAC, CSIRO, Metropolitan Fire Brigade, and Fire Protection Association Australia.

Above: Bushland coordinator at the City of Whitehorse, David Stewart, shows the Worcester students around Blackburn Lake.