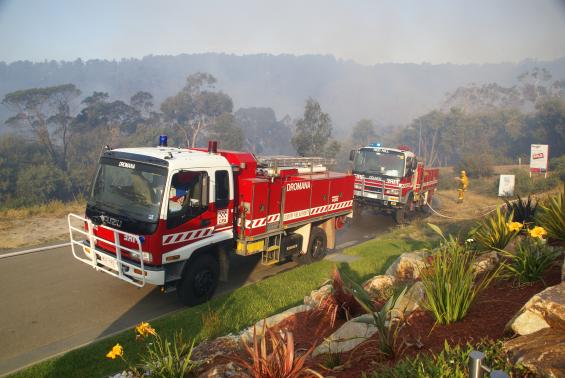 One of the Bushfire CRC extension’s biggest projects is to develop a prototype Fire Decision Support Toolbox – an advanced software program that will help fire managers fight bushfires faster and more effectively, while also identifying which parts of communities are most at risk from bushfires.

Imagine you are an incident controller sitting in front of a computer screen that is showing you where a fire that’s just started is likely to head. Not just that, but also what houses and other structures in the fire’s path are likely to burn, and even the number and type of people living in the area – children, adults, elderly.

Think of the advantages of such a program in making speedy, accurate decisions about where best to send fire trucks and fire-suppression aircraft. In being able to issue timely, locality-specific warning messages. In judging whether this fire will become so bad that it might warrant recommending not only an early, orderly evacuation of communities in its way, but also identifying the least risky roads for people to get to safety.

A computer program that will not only be able to help with all this and more in a fire, but will also be capable of use at any time in identifying what structures, streets and communities anywhere would be at risk should a fire occur, enabling those at risk to undertake remedial work around their properties to make them better fire-ready.

While such a program will not be ready this year or next, it is under development by collaborating teams of the Bushfire Cooperative Research Centre researchers from Geoscience Australia, the University of Melbourne, the Bureau of Meteorology and two divisions of the CSIRO. It has the working name Fire Impact and Risk Evaluation Decision Support Toolbox.

Project leader Dr Bob Cechet of Geoscience Australia says the work of the 2009 Victorian Bushfires Royal Commission highlighted a need for a tool to assess the potential bushfire impacts on rural and rural-urban interface communities, responding to an immediate threat but also examining scenarios that may pose a future.

“When fully developed, the Toolbox will enable fire and land management authorities to develop appropriate fire impact and risk treatment options at local, regional and national levels,” he says. Phoenix RapidFire will be the Toolbox’s engine. Phoenix RapidFire uses geographic and weather information to predict where a fire will go. It is now being used operationally in Victoria and under formal evaluation in New South Wales and South Australia.

Dr Tolhurst says reported Victorian fires are automatically simulated in Phoenix RapidFire to see their potential spread over six hours and the potential assets that might be affected. Additionally, a grid of ignitions across the whole state is run every morning to identify the areas most at risk from fire that day.

“We aim to improve the feed of meteorological data including the development of a third vertical dimension, convection, to enable Phoenix RapidFire to accurately depict fire-spotting ember attack ahead of the main fire-front,” says Dr Tolhurst.

“In addition, we are also planning to implement a more realistic fire suppression model to capture the ways in which resources are allocated to different sectors of a fire. The resulting firespread outcomes will be used by the advanced vulnerability and impact modules with [the Toolbox] to evaluate realistic impacts and costs which can be used to inform cost-benefit analysis for a range of land management options.”

The Toolbox is expected to add substantially more information about weather, geography, structures, population and fire behaviour to the already advanced technology of Phoenix RapidFire.

David Youssef, Deputy Chief Officer of Melbourne’s MFB and one of two lead end users for the project, says the project is about assisting incident controllers in difficult situations, providing a product that is genuinely useful to them and the community.

“It will be a tool to allow incident management teams to tell communities where their vulnerabilities are,” he says. “I believe the technology will be able to show even how a fire will impact on structures in a particular street. It will add much better information on, and give an incident controller much better information on, what structures are in a community and the demographics of the people living there.”

Ian French of Geoscience Australia is bringing various databases and models together into an integrated system through a geographical information system (GIS) interface. The data includes vegetation, terrain, topography and weather as well as people, buildings and infrastructure.

Pre-processed information, such as factors that determine the local wind and the regional wind and also the typical response of buildings to fire, will be linked with the buildings in the database, along with census-derived social and economic information.

“Large bushfires are complex and unpredictable,” says Mr French. “They are greatly influenced by variations in wind and temperature, terrain and vegetation. By varying the circumstances surrounding wildfires and modelling the likely impacts, the Toolbox will have the ability to run a large range of wildfire scenarios ranging from inconsequential to catastrophic which will inform the long-term fire risk for communities.”

Dr Jeff Kepert of the Bureau of Meteorology says the bureau’s new computer-based weather prediction system ACCESS uses better technology than its predecessor and is much more accurate and reliable.

“We’re going to configure it for very high resolution, and apply it to severe fire weather conditions in rugged terrain. Modelling at this scale will really stretch the computers but is necessary to be able to understand the complex winds, temperatures and humidity that occur during events like Black Saturday. Once we’ve validated the modelled weather against case study observations, our partners in this project will use it as an input to their fire behaviour models – the aim here is to directly predict the spread, intensity and impact of a fire. We also plan to look at some alternate scenarios, such as what if the wind change arrived an hour earlier or later?”

Justin Leonard of CSIRO Ecosystem Science has undertaken considerable research for the Bushfire CRC into the effects of fire on structures such as homes, fences and water tanks, seeking to understand how the physical attributes of buildings interact with their surroundings during bushfires. This work is now being expanded as another part of the Toolbox project.

“We plan to characterise the behaviour of vegetative and non-vegetative elements found within the rural-urban interface zone,” he says. “The research focus will be to provide consistent parameters that adequately describe the element properties and spatial relationship with their surroundings, so that simulations of the physical process that occurs during bushfire events can be performed.”

Another thread to the Toolbox is the effect of smoke. Dr Mick Meyer of CSIRO Marine and Atmospheric Research is investigating the smoke impacts on regional health from severe bushfires and prescribed burning programs, as well as the risk of reduced visibility caused by ground-level smoke.

His work involves the development of spatial smoke and chemical emissions estimates for major and extensive fire events in southern Australia, and the application of these estimates to several atmospheric transport models to predict tracer concentrations and surface impacts.

“Through comparison of the predictions against observations, we plan to assess the sensitivity of the predictions to parameter values in the emissions model,” says Dr Meyer. “We think that the most significant areas of uncertainty will be plume rise and the dependence of emission factors on combustion properties.”

He is working with a Bushfire CRC fire behaviour project led by the CSIRO’s Dr Andrew Sullivan, to undertake experimental burns in the CSIRO Pyrotron - a fire wind tunnel – to measure emission factors for methane, nitrous oxide, particulates and relevant air toxins covering a range of fuels and fire intensities.

All these strands of the Toolbox project need to be brought together in a working model by the end of the Bushfire CRC’s three-year extension in mid 2013. The work is so technologically ahead of almost anything else like it that the computer power to make it work in real time is not yet available, but the expectation is that this will be overcome as computer speeds and technology continue their rapid evolution.

Dr Cechet of Geoscience Australia says the focus of this current three-year project is to construct, develop and validate a prototype wildfire simulation system with the long-term aim to create a fully operational tool.

The immediate research and development focus is on the estimation of the consequences of extreme fires based on the characteristics of vegetation, extreme fire weather, firespread, and smoke production and dispersion, considering three case study scenarios.

“The next step will be evaluation by end users including land management and fire agencies. Following acceptance by agencies, we plan to implement robust computer software and hardware practices with the aim to make the Toolbox operational so that it can address potential bushfire response in near real-time,” says Dr Cechet.

Dr Kepert of the Bureau of Meteorology: “It will be some years before computers are powerful enough to run these very high resolution simulations in real time. But we plan to also use these simulations to better understand and interpret the resolutions that we can afford to run, today.”

The MFB’s David Youseff is confident the project will produce a model to run as a trial at the end of the three years.

“Fire managers need to make quick decisions under extremely complex conditions,” he says. “They need to know where to direct firefighting resources and how best to protect the community. As more people move into the rural-urban interface, we need to continually update the way we approach fire safety. The Toolbox will allow us to keep our communities safer. The success of the planned research is likely to trigger the development of an operational tool and a roll-out of the Fire Decision Support Toolbox to Australian fire and emergency service agencies.”