Impacts of Fire on Ecological Processes and Biodiversity 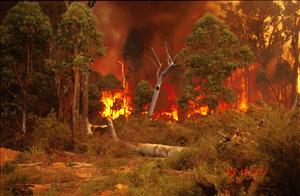 For land managers, understanding the impacts of fire on the environment is important. The ecologically sustainable management of forest ecosystems depends on understanding the processes involved in carbon and nutrient cycling, involvement of organisms in these processes, and how they contribute to biodiversity conservation.

Forests also play important roles in Australia's carbon budget, through accumulation of carbon, above and below ground. Low intensity fires are used extensively in managed forests in Australia and there is a need to better estimate the impacts of repeated fire on plant and animal communities.

This project focused on nutrient fluxes under different fire regimes, investigated the roles played by mycorrhiza and decomposer fungi; their inter-relationships with plants and invertebrates and likely impacts on ecosystem processes and carbon cycling.

Researchers, led by Dr Alan York at the University of Melbourne, analysed and documented the main findings from a series of long term fire effects sites around Bulls Ground and Eden in New South Wales and in the Wombat State Forest in Victoria.  They found that many fuel reduction burns are conducted too cool to have an effect on recruiting a new generation of plants. Also, they analysed the quantity and the role of decomposers on the fuel loads in forests and the impact of different fire regimes on these, providing advice to Victorian and New South Wales land management agencies on prescribed burning plans.

Further significant contributions to prescribed burning plans were made by University of Melbourne based PhD students. Anne Miehs looked at the role of coarse woody debris on the forest floor and how it could be managed for fire and conservation objectives.  Kerryn McTaggart used the Bogong High Plains as a base to look at how fire affected the uptake of methane in the soil of alpine ecosystems.

The knowledge is helping land managers to protect life and property whilst maintaining ecological processes essential to ecosystem health and productivity, and improving awareness and understanding of the role of fire in biodiversity management.

The Role of Fungi in Fire-prone Eucalypt Forest Communities and Effects of Frequent Burning on Fungal Networks
Authors M. Osborn

No detectable impacts of frequent burning on foliar C and N or insect herbivory in an Australian eucalypt forest
York A, Christie F

Using fire to manage for invertebrate/fungal interactions and biodiversity
York, A. and Bell, T.L.

The effects of fire on invertebrate biodiversity and ecosystem processes
Brennan, K.

Altered fire regimes: How resilient are invertebrates to change and what are the implications for biodiversity and the maintenance of ecosystem function?
York, A.