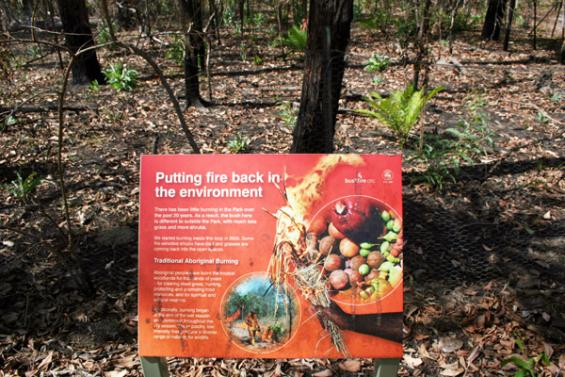 The vast majority of Australian bushfires occur in the savannas of the tropical north. While the Aboriginal tradition of landscape burning has waned, prescribed fire remains the key landscape management tool across vast areas. Half or more of the monsoonal tall grass landscapes of north-western Australia are burnt each year.

The “Burning for Biodiversity Project” covered a range of projects across Northern Australia.

An ongoing project at the Territory Wildlife Park, near Darwin, features an experiment for fire research, integrated with the delivery of public information and education programs. Eighteen hectare-sized plots are subjected to one of six fire regimes. Research activities cover fuel dynamics, fire behaviour, soil biology and ecological function, grass and tree dynamics, the role of herbivory in vegetation recovery, invertebrate biodiversity, and the population dynamics of small lizards.The work has direct application to the fire management issues in Western Australia, Queensland and the Northern Territory.

The researchers have also worked with traditional Aboriginal owners in Kakadu National Park, to examine the cultural benefits of Aboriginal fire management. This project was based in the floodplains of the South Alligator River. Results showed that the re-application of traditional fire management dramatically enhances biodiversity and the cultural values of these wetlands. As a consequence of this research prescribed burning practices have been changed in the wetlands of Kakadu National Park.

This project established a graphical web-based interface for integrating Indigenous and Western knowledge systems in the conservation of biodiversity and traditional resource use. This graphical approach illustrates how the nature and appearance of wetlands change with seasons and different management interventions. An Aboriginal manager’s understanding of wetlands includes factors such as sights, sounds and smells and these have been included into the model.

At a community level this has enhanced the cultural benefits of biodiversity and increased public awareness about the role of fire in northern Australia.

Andrew Edwards, based at Charles Darwin University, produced the field guide Fire Severity Categories for the Tropical Savanna Woodlands of Northern Australia from his PhD research that combined ground measurement with satellite sensing to map the fire severity of burns in the northern part of Australia. Ken Scott’s PhD study looked at how native grasses responded to fire regimes. This is being used by field staff in tropical savanna woodlands of northern Australia for better data collection and future research analysis, prescribed burning planning, and a wildfire abatement program.

The Kakadu Wetland Burning Project was a finalist in the Environmental Research section of the prestigious 2011 Banksia Awards.

Tropical savanna burning research was on show in September as part of the annual conference.