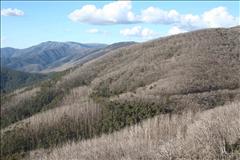 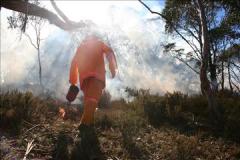 This project, led by Professor Mark Adams of the University of Sydney, was a significant extension to the work of the Bushfire CRC. Following the devastating alpine fires of 2003, public debate around land management intensified with many opposing views, much of this unsupported by scientific research. The HighFire project created an evidence-base for ongoing research that can be drawn upon by land managers in formulating future policy and practice. The Australian Government funding for this project finished in 2007.

It established a three-year national project on fuels and fire issues in Australia's high country under three sub-projects:

“This research is the only integrated effort to understand the impacts of land management policies, climate and fire on water yield from the high country,” said Professor Adams.

The first project established new, long-term research sites and experiments across alpine areas of Victoria, New South Wales and the Australian Capital Territory.  These sites provide data to underpin efforts to model the impacts of climate change on fuel loads and the trade-offs among fuel management and water yield.  The project also addressed issues raised in major reports, such as the Nairn Inquiry and Council of Australian Governments (COAG) reports on the 2003 fires.

Important new work by PhD student Meaghan Jenkins revealed that sub-alpine vegetation types in Australia significantly influence soil chemistry and rates of carbon release as CO2.Meaghan developed an approach for accurately measuring gas exchange from soils.Soils hold about double the carbon that is stored in the atmosphere. Changes in carbon release rates from soils are largely determined by patterns of vegetation, which are determined by patterns in fire and temperature. Bushfire, this study concluded,is at least as important as temperature, in its effect on both plant growth and release of CO2.

Furthermore, this project assessed the combined impacts of grazing and burning on fuel accumulation in sub-alpine grasslands and woodlands with a series of experimental plots. Over the three-years of research by Dr Maria Taranto and Dr Stephen Roxburgh, the impact of fire on the vegetation was able to be measured but the effects of grazing were much more gradual. Hence, the combined effects of fire and grazing may take decades to be fully apparent.

An important element in HighFire was the social research that provided an understanding of community experiences and attitudes on fire management in the high country. This research looked at how fire and land agencies and communities manage the risks involved with both prescribed burning and with bushfires.

Led by Professor John Handmer from RMIT University, the Living with Fire component of the project documented local experiences of fire in the high country in order to share this knowledge to improve resilience among communities. Details of this research were documented in the Program C book Community Bushfire Safety.

The third component of HighFire, Management of Bushfire Risk, was led by Rick McRae of the ACT Emergency Services Authority and Professor Rod Weber of the Australian Defence Force Academy at the University of New South Wales, with colleague Dr Jason Sharples.

This team recognised that several processes are known to influence fire behaviour in mountainous regions, ultimately determining the size of a bushfire and the level of risk to assets. These processes include the interaction of terrain features, climatic conditions and local weather patterns. Portable weather stations were erected to examine the unique weather patterns of high country ACT and NSW.

Although the same processes influence fire behaviour elsewhere, new understandings on the unique nature of the interactions in the high country is contributing to better management of fires in these areas. More outputs from the risk project can be found here.

A major gathering of agency staff, community and researchers was held in Albury, New South Wales in 2010 to share the research findings and to consider their implications and applications. The HighFire Risk work has immediate applications to fire-fighting agencies. Educational learning materials focussing on fire weather and fire fighter safety are under development.

One of the key elements of this work was to establish long-term research sites for longer term research, this has been achieved across Victoria (Bogong and Dargo High Plains; Kiewa Valley), NSW (Snowy Plains) and ACT (Cotter catchment).  The initial three years of funding has only allowed experiments relating to the establishment of the project to be conducted. Research will continue to be funded through other organisations in the coming years. Research findings from the initial studies are in the process of peer-review and publication through journals and PhD thesis submission.

The current outputs are listed below others will be added as they are published. See also www.highfirerisk.com.au for more outputs from the risk project.

Among the overall reactions to a major fire event of importance to fire services, are three which do not mesh well: learning about the event; improving community safety; and laying blame.

A total of 1430 people came to our annual conference in Sydney in late August.

Planned fuel-reduction burning remains one of the most controversial issues in managing forests and lowering the risk of bushfires to people and property. A new book takes a comprehensive look at the subject.

Many rural communities have a wealth of knowledge, tradition and experience of their district. This understanding of country, fire and weather history is being harnessed by Bushfire CRC research for use within future fire management.

Residents and workers of north-east Victoria have the opportunity to find out more about bushfire research in the region with two community events planned for early next month.

In September 2004, some fourteen months after the establishment of Australia’s Bushfire CRC, the then Prime Minister announced the allocation of an additional three million dollars for fire-related research in the high country regions of south-eastern NSW and north-eastern Victoria.

The mysteries of climate change are being explored across the high plains and mountain forests of Australia through a study trying to unravel the complex interaction among water yield, fire, drought and long term changes in climate.

A unique mobile laboratory is measuring greenhouse gases in Australia’s high country. The fully-self contained laboratory is housed within a 4WD vehicle and trailer and includes sophisticated scientific equipment that takes continuous measurements of CO2, CH4 and N2O emissions 24 hours a day, seven days a week.

Adaption of tree carbon water balance to high Co2: are stomata up to the task?
T.N. Buckley

Fire and carbon emissions in the high country

Fire and carbon emissions in the high country

Rick McRae led the Managing the Risk component of the Bushfire CRC Highfire project. He was interviewed at the 2010 Bushfire CRC annual conference in Darwin.