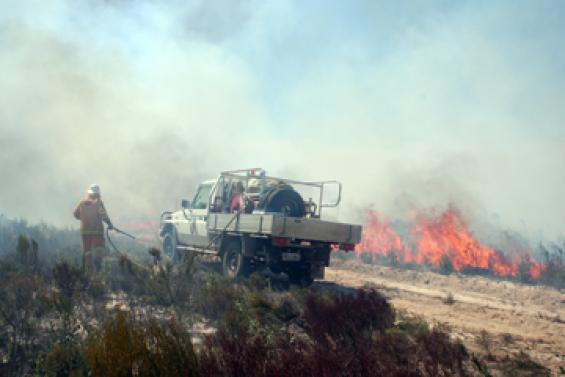 At the rural/urban fringe, firefighters are exposed to smoke from not just vegetation, but from combinations of burning houses, cars and other materials. These firefighters are less likely than urban firefighters to be wearing breathing apparatus, and may be more vulnerable to health risks posed by burning organic compounds that have been, until now, mostly unmeasured.

Emissions of toxic chemicals from burning building materials have previously been measured and characterised in laboratory tests, but to quantify the risk that the smoke poses to humans, the emissions need to be translated into exposure estimates.

This research by Dr Fabienne Reisen (CSIRO Marine & Atmospheric Research) identified, measured and modelled these toxic emissions more accurately than ever before.

New, high-resolution modelling techniques of both dispersion and wind-behaviour are able to take into account the chemical emissions from multiple and complex sources, predicting where potential high-risk exposure zones may be.

Results indicate that within 50 metres of a burning house, exposures are on average constantly exceeding peak and short-term exposure limits and there is no safe approach without protection. At 100 metres, exposures are still exceeding peak limits, but mean concentrations are within safe exposure limits. At 150 metres, peak concentrations can still be close to their respective peak limits, primarily at high wind speeds.

The research allows for a more targeted estimate of house-specific local toxic emissions, rather than averages over the footprint of the house or suburb. This will enable fire agencies to access information about exposure estimates and their likely spread at rural/urban interface fires, resulting in safer deployment of firefighters and providing better advice to the community.

A subproject was undertaken by PhD student Anjali Haikerwal, of Monash University. Anjali investigated cardiovascular and respiratory health effects of smoke from the 2006/2007 bushfires in Victoria. Her results are extending the knowledge base and awareness of the health impacts of bushfire smoke in rural and urban communities.

Bushfire CRC research has helped to understand what is in the smoke, particularly smoke from bushfires at the rural–urban fringe.

What is in the smoke of bushfires at the rural/urban interface? This research is assisting fire agencies gain a better understanding of potentially toxic emissions and their exposure concentrations at these types of fires.

Smoke impacts at the interface

An overview of the project Smoke Impacts at the Interface, with Lead End User Robyn Pearce of the Tasmania Fire Service.

Smoke impacts at the interface