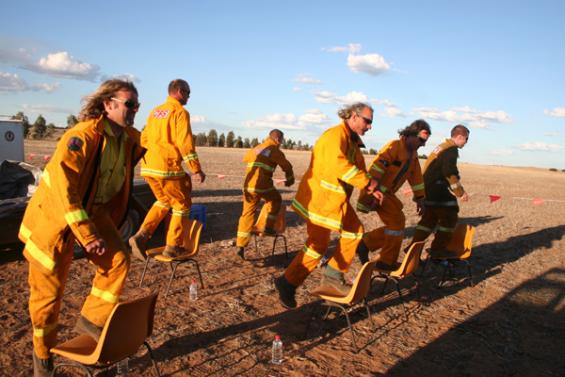 Firefighter safety is a high priority for fire agencies. Battling fires in hot and smoky conditions is at times unsafe and unhealthy. Firefighters are subject to stressful conditions, in which fatigue and work capacity is affected by the erratic nature of work and rest cycles and the need for food and liquids.

Work environment issues plus physiological and psychological pressures are a constant factor. The ageing population, demographic variety and physical condition of the Australian volunteer firefighter presents a significant challenge to fire fighting agencies in improving safety conditions on the fire ground.

This research was led by David Nicholls at the Country Fire Authority and Dr Brad Aisbett at Deakin University.

“Despite a heavy reliance on volunteer firefighters in Australia, there has been limited research into the physical demands that they experience during bushfire suppression,” said Dr Aisbett. “Similarly, before this project the health and physical fitness of these volunteers had received little research attention.”

The project provided a quantified picture of the total fireground environment. Importantly, it provided a unique insight into the level of fitness of current firefighters and made scientifically based recommendations on the level of fitness required by bushfire fighters over a range of common tasks. This has been communicated to Australian and New Zealand firefighters at several annual conferences and national workshops.

A study by Jenni Raines investigated the effect of hydrating firefighters before, during and after live bushfire fighting shifts. Data was gathered from firefighters at several bushfires and also at the large burning experiments conducted by researchers in Program A at the Ngarkat Conservation Park in South Australia. This ground breaking work is now the basis for agencies to provide scientifically valid fluid consumption strategies for bushfire fighters.

Health and safety in the field

Photo (above) - Testing under way on the fireground at a research burn, Ngarkat Conservation Park, March 2008.

Fit for fires - are our volunteer firefighters up to the test?

As Australian recovers from its worst ever fire season, a new study establishes for the first time the safe physical work standards that should be applied for the nation’s 220,000 volunteer firefighters.

Research to help DEH take care of their firefighters

Key research findings into understanding the health and wellbeing of firefighters will be presented to the Department for Environment and Heritage (DEH) on Thursday 11 December. According to Deakin University PhD candidate Jenni Raines, who is conducting her research in conjunction with the Bushfire Cooperative Research Centre, bushfire fighting is unmistakably a hazardous occupation.

For vegetation fires, what activities does a volunteer tanker-based firefighter do in an average day’s work? A question that is the focus of the study being undertaken by Bushfire CRC researchers Dr Brad Aisbett and PhD student Matthew Phillips from Deakin University, assisted by the Tasmania Fire Service (TFS), Tasmania Parks and Wildlife Service and Forestry Tasmania.

Firefighter health, safety, and wellbeing on the fireground
B. Aisbett; D. Nichols