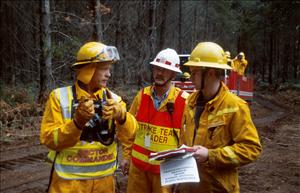 Firefighting, despite heavy reliance on fire prediction, hazard models, fire control and suppression technologies, is ultimately a human activity. It requires individual firefighters to form risk assessments and initiate courses of action. It requires that individuals be aware of, and give adequate attention to, the safety implications of any decisions they might implement.

The project team developed the Human Factors Interview Protocol to help firefighters recall and recount their experiences on the fireground as accurately as possible.

They identified around 20 individual and 10 small group human factor issues that appeared to be relevant to safety on the fire ground. This included the issue that firefighters were reluctant to change a decision once it was made, even though something else – such as moving fire trucks elsewhere – might be more effective. Other issues involved mental overload, underestimating the situation, role confusion, and inconsistencies in trusting a range of information sources.

Research specifically looking into how bushfire fighters think about worst case scenarios was conducted by PhD student Claire Johnson. These kinds of extreme events are rare and so the possibility of them occurring can be overlooked, with tragic consequences. Claire looked at how worst case scenarios are currently considered, how and when they should be considered and how training might develop these skills.

And PhD work by Peter Hayes explored the differences in the decision making quality between pre-formed teams and those teams pulled together at short notice, that is, ad hoc teams.

This project is greatly improving the ability of fire agencies to amend and develop processes and to train their firefighters, increasing the likelihood of safe decisions, particularly under stress. These researchers have been in particularly high demand as speakers and experts and have participated in many agency based workshops and seminars in addition to making key presentations at community forums and the Bushfire CRC/AFAC annual conference.

The influence of familiarity on teamwork and decision making

Learn from fire with staff ride

A collaboration between the Bushfire CRC and the Tasmania Parks and Wildlife Service aims to assist fire agencies learn from a bushfire with a staff ride – a practical learning activity in analysing response to a fire.

Firefighters and the human factor

Investigations into accidents or near miss events on the fireground mostly focus on finding out the details of what happened, with relatively little consideration given to the thoughts and mental processes driving the firefighters’ decisions.

Many wildland firefighter deaths and injuries in Australia and overseas have resulted from firefighters being surprised and overtaken by a fast-moving fire - both on foot and in vehicles, in both grass and forest environments.

The Influence of Familiarity on Teamwork and Decision Making. A Bushfire CRC PhD project by Peter Hayes, La Trobe University.

Getting acquainted at the IMT level

Getting acquainted at the IMT level

Staff ride for a Narawntau planned burn, Tasmania Parks and Wildlife Service. Filmed with the support of the Bushfire CRC.

In this video series, Claire Johnson, based at La Trobe University, talks about her completed PhD project on preparing for worst case scenarios. Claire completed her PhD in March 2011.

Part 1 - what this research is about and what it found.

Part 2 - how this research can be used.

Part 3 - what is planned for the future with this research. 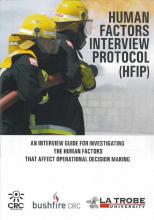 The influence of familiarity on teamwork and decision making