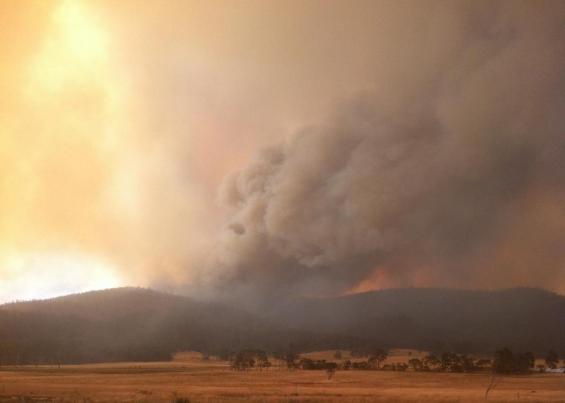 This report provides information on the areas burnt and fire behaviour of some of the fires that occurred during the 2012–13 Tasmanian fire season. The fires covered are: Forcett–Dunalley, Repulse, Bicheno, Giblin River, Montumana, Molesworth and Gretna. In total, the fires covered in this report burnt about 90 175 ha (out of the nearly 120 000 ha that was burnt during the 2012–13 Tasmanian fire season).

The main driver of the extreme levels of fire behaviour observed during these fires was a combination of surface weather conditions and atmospheric instability. During the time periods when the fires were making their major runs, both of these factors were at very high levels. This means that in order to predict the likely fire behaviour during these conditions, measures of both of these factors are required. This can be done using a combination of the Fire Danger Rating to give an estimate of the conditions prevailing at the ground surface and the C-Haines Index for a measure of atmospheric instability.

During each of the Forcett–Dunalley, Repulse, Bicheno and Giblin River fires, high-intensity fires burnt into recently burnt areas. In each of these situations, the head fire’s spread rate, intensity and spotting were stopped or greatly reduced, indicating the value of low-fuel-hazard areas for reducing the level of fire risk.

This report also identifies the importance of early response with adequate resources, effective mop-up and patrol, and the importance of identifying the conditions where effective suppression is not feasible so that fire crews can pull back and all resources can be applied to protecting life and property. For example, when the fire danger rating is high or above and the C-Haines Index is above 8 (and especially when it is above 10), fire suppression operations are often ineffective and fire-management agencies need to concentrate on protecting life and property.