Community forum at Cooma - bushfire research on the Snowy Plains 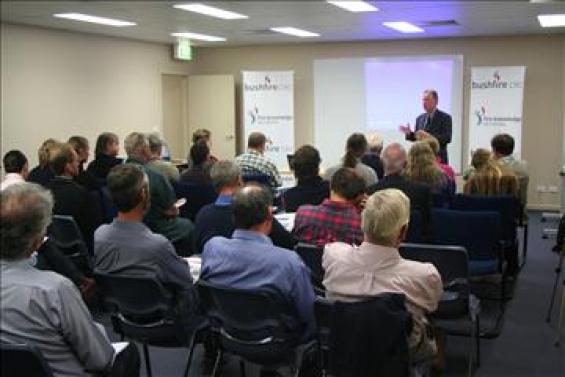 Cooma residents have heard about a range of bushfire research projects underway in the region that are likely to influence future land management practices, in Australia and possibly internationally.

The NSW Rural Fire Service hosted the session for the Bushfire Cooperative Research Centre at the Cooma Fire Control Centre on the evening of 12 April 2007.

Bushfire CRC researchers have several projects across the Cooma-Monaro region including the High Fire project, which is looking at the influences on fuels in alpine areas, especially prescribed fire and grazing.

The High Fire project has several research sites on the Snowy Plains as well as sites in the Kiewa Valley in Victoria and in the Cotter Catchment in the ACT. The Snowy Plains site had some prescribed burning treatment recently as part of the project.

The Federal Member for Eden-Monaro, the Hon Gary Nairn, welcomed the researchers at the Cooma forum and said much of the Bushfire CRC work was taking up the recommendations of ‘The Nation Charred” report he chaired on the 2003 alpine bushfires.

“As part of the inquiry I was keen to see good, hard practical work done in this area so we could cut out a lot of the emotional argument and deal with facts and science,” Mr Nairn said.
“The CRC has been doing some great work so far but it is going to take a few years to really have the full evidence because every year is a different weather cycle. You can’t make definitive decisions based on just one or two seasons.’’

Mr Nairn said the High Fire project was now starting to get interesting results. “But we do have to keep it going and I will be doing all I can to help ensure that that does occur as an ongoing project.”

The chief executive officer of the Bushfire CRC, Mr Kevin O’Loughlin, said the High Fire project was a good example of research work done in partnership with local communities.

“The support we are getting on the Snowy Plains from the local landowners, the Rural Fire Service and the National Parks and Wildlife Service is invaluable and is helping to shape this important work,” he said.

“I think the work being done here is quite unique. There was research in the past on the effects of grazing and separate research on prescribed burning but not on the two things combined and that is what is happening today on the Snowy Plains. We are also looking at the connections between fire and carbon released into the atmosphere and the relationship between fire management and water supplies. This research will not only be important nationally, but it will generate interest internationally because other fire prone countries are considering similar issues.”