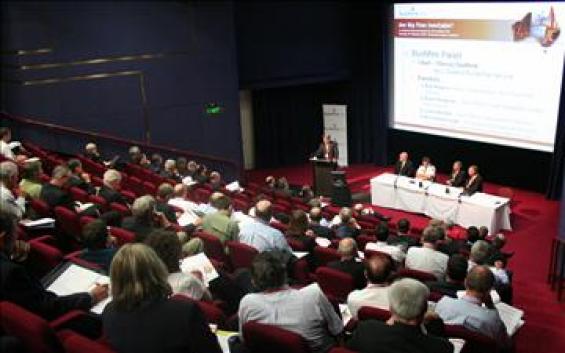 A full day of discussion covered many topics but centred on the need for ongoing funding for research into bushfire management in Australia and New Zealand.

ABC Local Radio provided substantial coverage of the proceedings including an online series of reports.

More than 150 people gathered at Parliament House in Canberra at the end of February for the first National Bushfire Forum – Are Big Fires Inevitable? Hosted by the Bushfire CRC, the one-day forum attracted politicians and policy makers, the fire and land management agencies and other industries including forestry and water.

The focus of the day was the challenge of addressing the apparent increase in the frequency of very large fires. More than 30 speakers spoke of how these bushfires were impacting on their field and how policies and practices, and the research underpinning them, may need to change in response.

A scene setting keynote address by Jerry Williams, former National Director of Fire and Aviation at the USDA Forests Service and now a Senior Advisor at the Brookings Institution, argued that the increase in very large fires was an international problem, and that it needed consideration of new approaches apart from increasing suppression resources to match the increased threat.

Leading Australian bushfire behaviour expert Phil Cheney, an Honorary Research Fellow at CSIRO, stressed what he saw as the vital role of vigorous prescribed burning as a key part of the strategy to reduce the risk and effects of these fires.

A session on the link between large bushfires and climate was led by Dr Neville Nicholls, Professorial Fellow at Monash University and Professor Will Stefan, Pro Vice-Chancellor (Research) at the Australian National University.

Australian and New Zealand Fire chiefs featured in panels on bushfire management and communities. New South Wales Fire Brigades Commissioner, Greg Mullins spoke of the importance of community engagement. “One of the big issues that fire services are facing is that community engagement is a key factor in mitigating the effects of fire,’’ he said.

Chief executive officer of the Country Fire Authority, Neil Bibby, said community engagement relied upon good communications. “If we are going to inform the community, we need to do it in an accurate manor an in real time.”

Other panels addressed bushfire aspects of water resources, forestry management and impacts on the environment.

Parliament House was chosen as the venue to assist engagement with federal politicians and federal bureaucrats. Three federal ministers spoke at the event: the Special Minister of State Gary Nairn; the Minister for Fisheries, Forestry and Conservation Senator Eric Abetz; and the Attorney-General Phillip Ruddock.

A number of other federal politicians attended parts of the forum including the Speaker of the House, David Hawker, whose electorate was badly affected by the fires in the Grampians area of Victoria in early 2006.

Minister Nairn referred to the amount of research and community education that had occurred since the start of the Bushfire CRC in 2003.

“My view is that for too long many of the practices in various parts of the country have been based on more a philosophical view about fuel and fuel reduction rather than a scientific one and that is what the CRC is all about - doing the science,” he said.

“Congratulations to the CRC for putting this forum together. The work of the CRC is excellent and continuing. It is extremely important for these forums to occur - where you can bring together all sorts of people as part of the debate.”

Senator Abetz spoke about his recent tour of bushfire affected areas of south-east Australia and his meeting of communities in these areas.

“Whilst today’s forum quite rightly is not for attributing blame the community expects quite rightly for someone to take responsibility.” he said

The Bushfire CRC is now following up on the research issues raised at the forum. It is expected that AFAC will take a leading role in discussions on new policy approaches, including a possible national bushfire management strategy.