Forest fires in Europe - a view from Portugal 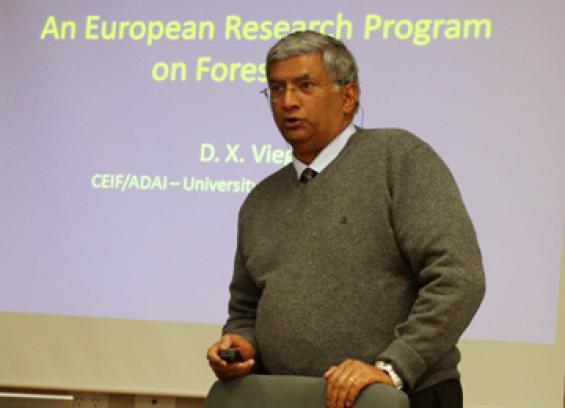 Professor Domingos Xavier Viegas provided an overview of a research program on forest fires propagation carried out at the University of Coimbra, in Portugal, at a Bushfire CRC seminar today.

He spoke about the research topics that have been covered in this program including: fire meteorology; fuel modeling and characterisation; slope and wind effects on fire spread, extreme fire behaviour; fire safety and decision support systems. 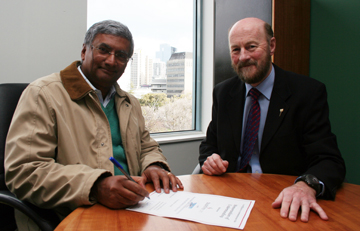 Professor Viegas and Bushfire CRC CEO Gary Morgan also renewed the formal Memorandum of Understanding between their two organisations. An MOU was signed in 2006 between the Bushfire CRC and the Associação para o Desenvolvimento da Aerodinâmica Industrial (ADAI) at the University of Coimbra.

As part of this MOU, Professor Viegas was a guest of the Bushfire CRC and spent a week visiting other partners and viewing the areas burnt in the Victorian fires of February this year. Discussions took place on opportunities for further collaborative research and other activities in coming years.

Professor Domingos Xavier Viegas’ main area of interest since 1985 has been the study of physical aspects of forest fires, in particular, the analysis of the effect of wind and slope on fire behaviour and fire safety.

He has coordinated various research projects funded by Portuguese institutions and the European Community, and has also been responsible for promoting the organisation of several scientific meetings, training courses and seminars about forest fires, including five international Conferences. 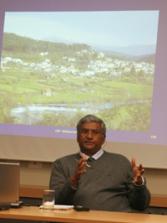 He has held the post of full Professor of the Department of Mechanical Engineering, of the Faculty of Science and

Technology of the University of Coimbra since 1992.

He is the Coordinator of the Centre for Studies on Forest Fires (CEIF) and President of the Associação para o Desenvolvimento da Aerodinâmica Industrial (ADAI) since its creation in 1986.

He has been an Invited Lecturer at several international conferences, seminars and courses. In addition to this Professor Viegas has authored several publications on forest fires.