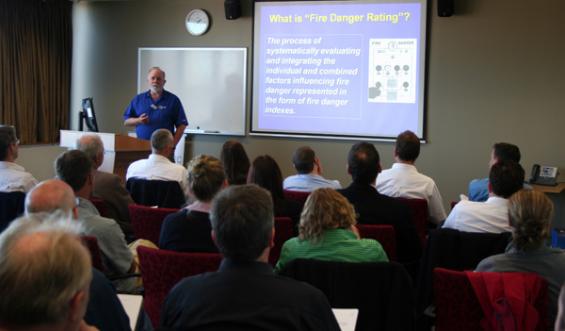 The Science and Art Behind Fire Danger Ratings

An Historical and International Perspective

In this seminar, Dr Marty Alexander provided a broad overview of the fundamental principles of fire danger rating based on his experiences with the development and application of the Canadian Forest Fire Danger Rating System over the course of his career with the Canadian Forest Service (1976-2010).

This included a one-year secondment to New Zealand (1992-93) coupled with his early involvement as a student assistant with the US National Fire-Danger Rating System project (1972-74) and more recently as an subject matter expert for the European Joint Research Centre to examine the feasibility of developing a global fire danger rating system.

Dr Marty Alexander has been "student" of the Australia bushfire scene for some 40 years. He undertook post-graduate studies in Canberra during a 3-year sojourn with the CSIRO bushfire research unit in 1989-1992.

He retired in 2010 as a Senior Fire Behaviour Research Officer with the Canadian Forest Service in Edmonton, Alberta. He presently serves as an adjunct professor at the University of Alberta and Utah State University as well as an honorary research associate at the University of New Brunswick. His research and technology transfer efforts have focused on practical applications of wildland fire behaviour knowledge, including firefighter safety.

This seminar is part of the Bushfire CRC Professional Development event series - it is co-hosted with the New South Wales Rural Fire Service and the University of Sydney.