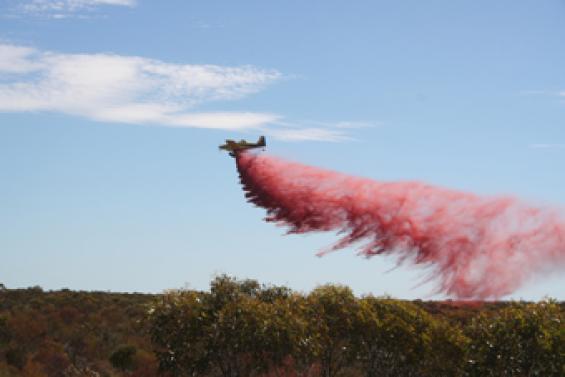 The number  of aircraft used in fighting bushfires in Australia rose from just a few in the mid-1970s to several dozen by 2010, with some, especially the large Erickson Aircrane helicopters, attracting wide public attention with nicknames such as Elvis and Elsie.

The National Aerial Firefighting Centre, funded by the federal, state and territory governments, was established in 2003 to fund a growing national fleet.

Despite the significant role of aircraft in firefighting by the time of the establishment of the NAFC, there was no significant research into how appropriate, useful and effective they were.  One of the first big tasks undertaken by the Bushfire CRC after its establishment the same year was to initiate that research.

The research was conducted by the Bushfire CRC in conjunction with the CSIRO Bushfire Research Group, RMIT University and fire and land management agencies, with an initial report, The Effectiveness and Efficiency of Aerial Firefighting in Australia, published in 2007. The lead author was Dr Matt Plucinski  of CSIRO Sustainable Ecosystems.

The research looked at many scenarios, including such issues as single or multiple “drops” on fires and whether and when to drop water or chemical-based retardants. It found that aerial suppression drops were of limited value without timely follow-up by firefighters on the ground, but when used properly, could enable ground firefighters to contain fires more quickly.

Field work was conducted in Tasmania and at the Ngarkat Conservation Park in South Australia, where a combination of water, chemical and gel drops were compared. Drop data from aircraft at real bushfires in several states was also obtained.

Among other things, the research led to the production of a Fire Containment Guide, an online Fire Containment Calculator and a Drop Effectiveness Guide to help fire managers assign and use fixed-wing aircraft and helicopters effectively.

In the wake of the 2009 Victorian Black Saturday bushfires and publicity about large jet airliners being used to fight fires in the United States, the Victorian Government funded the trial of an American DC-10 firefighting jet during the 2009-10 fire season. On behalf of the Bushfire CRC, a team led by Dr Plucinski  evaluated the effectiveness of the DC-10 in Victorian conditions. It was found that the DC10 had a number of issues that deemed it unsuitable for use in Victorian conditions.

The DC-10 firefighting tanker jet trialled in Victoria last summer will not return this fire season after a comprehensive Bushfire CRC evaluation of its performance found the aircraft unsuited to Victorian conditions.

A guide to the skies

A new tool developed by a Bushfire CRC researcher from CSIRO Sustainable Ecosystems sets aside the operational support roles of planes and helicopters, and focusses squarely on the attacking role of bombing aircraft, and how they might best be used to deliver fire suppressants including water, foam, gel and retardant.

Effectiveness and efficiency of aerial fire fighting in Australia