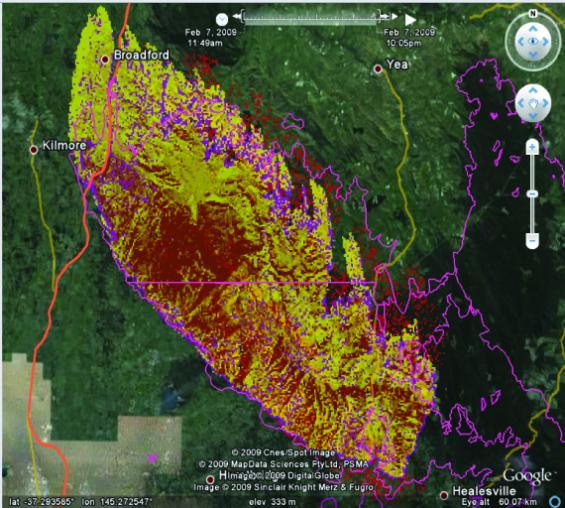 The Victorian State Government this week launched a fire prediction and early warning system based on Bushfire CRC research that will deliver detailed information on the spread of fires to help protect communities in the event of a bushfire.

The Premier Mr John Brumby outlined details of the digital mapping system that will provide up to six hours warning of the direction, speed and intensity of a fire within minutes of it being discovered.

The system, which integrates the existing FireWeb system with the Bushfire CRC’s computer mapping and fire simulation system called Phoenix RapidFire, has been trialled for the past 12 months and will become a key tool in Victoria’s firefighting effort in the upcoming bushfire season.

“Black Saturday highlighted that our mapping and fire prediction systems needed improving. One of the key messages from the Royal Commission was that early warning of bushfires plays an extremely important role in making our community safer,” Mr Brumby said in a media statement.

“This new technology is a world’s best-practice computer system that integrates critical fire, Bureau of Meteorology weather data, topographical information and on ground fuel data and maps it immediately in digital format for use by fire authorities to predict the path and intensity of fires.

“This will vastly improve the ability of fire authorities to determine which communities will be impacted by fire and deliver early and accurate warnings to them. This will happen within minutes of the fire being discovered rather than what could have taken hours previously.

It will also assist fire incident management teams in delivering information to firefighters on the ground to assist them in their suppression efforts.”

Mr Brumby said information on FireWeb would immediately be made available to fire authorities to inform public warnings through One Source One Message, DSE and CFA websites and delivered to media outlets that have a Memorandum of Understanding to provide emergency warnings.
“Members of the community will be able to go to those websites or turn on their televisions and radios and access the warnings and information generated by FireWeb almost immediately after a fire has been discovered,” he said.

The Phoenix RapidFire system, was developed by Bushfire CRC researcher Dr Kevin Tolhurst from the University of Melbourne.