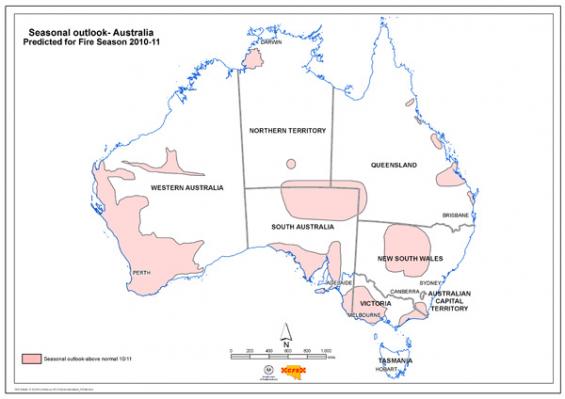 Across southern Australia, above-normal fire potential is expected over the remaining drought affected parts of the southeast, including much of Victoria, and west coast areas of South Australia, for summer 2010-11. Much of the Southwest of Western Australia still has above normal potential as does an area of central Australia and smaller areas in Queensland. Conditions in Tasmania and much of New South Wales indicate normal fire potential.

These expectations summarise the views of the attendees at the Southern Seasonal Bushfire Assessment Workshop, held between 23-24 August 2010 in Melbourne. This workshop, supported by the Bushfire CRC, brought fire managers, severe weather meteorologists and climatologists together to evaluate the fire potential for the upcoming season for the southern part of Australia. The fire potential of northern Australia was evaluated at a similar workshop held in July 2010 in Darwin as in previous years.

Fire potential depends on multiple factors. The stage is set by the antecedent rainfall. This is important for estimating the fuel amounts and growth, as well as determining the timing of the drying or curing of the fuel. The climate outlook for the next few months is a crucial factor.

Of particular interest are the future tendencies of Pacific sea surface temperature associated with the El Niño-Southern Oscillation, a major climate driver over Australia. Other, less quantifiable factors, such as the distribution and readiness of fire-fighting resources, are also considered. The participants at the workshop discussed these factors to obtain the consensus outlook. A Bushfire CRC Fire Note presents a brief summary of the workshop; a more complete report will shortly be available to Bushfire CRC members.