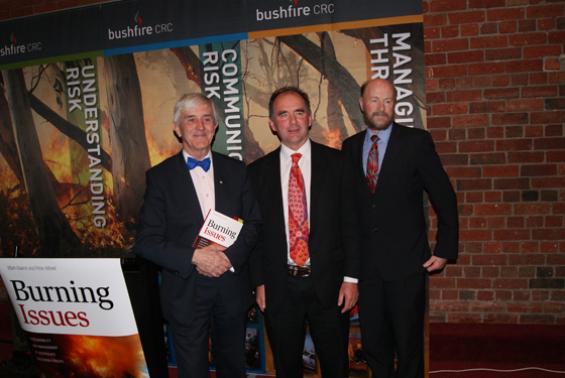 Burning Issues, the new book on prescribed burning by Professor Mark Adams of the University of Sydney and Dr Peter Attiwill of the University of Melbourne, has been officially launched by the Hon Bernard Teague, AO, the chair of the 2009 Victorian Bushfires Royal Commission.

Justice Teague told the audience at the book launch in Melbourne on 23 November that he became a convert to the evidence for prescribed burning during the proceedings of the royal commission.

"I hope the robust rigour of Burning Issues will help to convert many others."

Before the royal commission he believed all fires were bad. His horizons were opened somewhat by the reading he did before the hearings and during their early days, when he became aware how contentious the evidence on fuel reduction burning would be.

Justice Teague said the panel members agreed on almost all the issues related to controlled burning.

"After the panel, I was convinced." Among its recommendations, the royal commission urged the Victorian State Government to commit to a long-term program of prescribed burning with a minimum annual target of 5 per cent of public land.

Professor Adams told the gathering he and Dr Attiwill took on the task of writing Burning Issues knowing they would be belted by some because of the subject.

"You enter into the fray knowingly, but in our case with a very determined and dry-eyed approach. One of the important attributes I've been taught as a scientist is to strip the emotions out."

Professor Adams paid tribute to Dr Attiwill, who was unable to attend the launch.

"Peter is not someone who takes any subject lightly. When I invited Peter to work with me on the book and he accepted, I was delighted.

"We sought to write a book that is a good read. It's a book where we don't shy away from political issues. Unless scientists of independent mind and determination are willing to put on the public record what they believe, the debate will not happen.

"It's all too easy to dodge the hard issues."