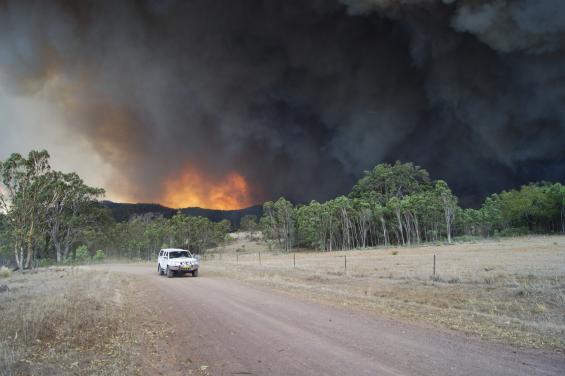 This article was published in the Spring 2013 edition of Fire Australia magazine.

It is a critical choice that could have devastating repercussions for residents in bushfire-prone areas. Yet it’s a decision that many will delay until the day of a fire. Why do residents delay their decision to defend or evacuate, and what can be done to help them make more timely, appropriate choices?

Bushfire CRC-sponsored research is, for the first time, providing empirical evidence that helps explain the mysterious human behaviour of delayed decision-making. The results will be used to develop effective strategies to support households in preparing bushfire contingency plans.

The study’s findings have uncovered reasoning that could be regarded as counter-intuitive, challenging assumptions about why residents delay a decision that would be more safely resolved ahead of the fire event.

Dr Ilona (Illy) McNeill from the University of Western Australia’s School of Psychology was the lead researcher in the study. Conducted as part of the Information Processing Under Stress: Community Reactions project the team also included Dr Patrick Dunlop (University of Western Australia), Professor David Morrison (Murdoch University) and Professor Timothy Skinner (Charles Darwin University). The results are due to be published in the International Journal of Wildland Fire.

Dr McNeill pointed out that bushfires could cause substantial losses, as measured in economic and social terms and in human casualties, as evidenced by the 2009 Black Saturday bushfires in which 173 people died.

She also said that, before each bushfire season, Australian fire agencies encouraged residents of fire-prone areas to decide whether they would defend or evacuate, and to properly prepare for their intended response. “However, when residents are asked how they will respond to a bushfire, many say they’ll wait until the day of the fire to decide.”

Research into decision delay
“This decision delay causes big problems for several reasons,” she said. “We know from earlier research that people who delay this decision tend to carry out fewer preparations for both defending and evacuating, compared to people who have decided on one of these concrete actions.

“We also know that ‘decision delayers’ will need to spend more time deciding what to do during the fire. This may then lead to late evacuation, with all the increased risk that entails. And the duress of the situation increases the likelihood of making poor quality decisions.”

Given this knowledge, why do so many people delay choosing between what appear to be two clear fire responses?

The researchers looked beyond the subjective nature of previous research to find the answers. “While past research has provided some insights into people’s actions during a fire, we examined what influences people in their response decisions before the fire event,” Dr McNeill said.

“As well, the limited research that has been done has generally relied on participants’ subjective accounts of their decisions, rather than empirical evaluations.

“People can rationalise their decisions afterwards but research has shown they are not always equally capable of determining what actually influenced their decisions.”

An example of this was “a desire for more information” that many people cited as being the main reason for their delay. Dr McNeill was sceptical about this. “It’s complex. Past research on decision avoidance has found that information requests are often a symptom of decision delay rather than an actual cause of it. Pinpointing the actual causes of delay is important because different causes beg for different strategies to reduce it,” she said.

Resident surveys
To gather empirical evidence, the project’s researchers developed a survey that they distributed to residents of bushfire-prone areas around Western Australia across the 2011–2012 fire season. The participating communities were based at and around Brigadoon, Roleystone, Bunbury, Gelorup, Gidgegannup and Stratham. The survey measured both the anticipated fire response of residents and the plausible causes of decision delay. These plausible causes were derived from social psychology literature on decision avoidance. Surveys were distributed to residents on two occasions: the first in October 2011 (as the bushfire season started) and the second in March 2012 (as the bushfire season ended).

The October 2011 survey was sent to 1,700 households, resulting in 350 completed responses —a 20% response rate. The March 2012 survey measured behavioural change and was therefore only distributed to the 350 households that completed the initial survey. The researchers received 189 usable responses—an excellent response rate of 54%.

The October 2011 survey measured several plausible causes of decision delay. Two were personality factors: general indecisiveness and ‘need for cognition’.
Need for cognition has been defined as ‘the tendency of an individual to engage in and enjoy thinking’. The survey also measured the lack of perceived relevance of the decision (i.e. low risk-perception), and ‘decision difficulty’ due to a lack of difference in attractiveness between the option of defending a house or evacuating. To gauge this decision difficulty, researchers measured how much value people expected to derive from defending their house compared with evacuating early.

The March 2012 survey measured another plausible cause of indecision—the avoidance of responsibility for bad outcomes. It asked respondents who would be responsible for saving their house and their lives during a fire: the government, themselves or a mix of both.

The respondents’ intended response to a bushfire was measured both before and after the bushfire season. The overwhelming majority of the survey respondents indicated they would delay their decision of whether to defend or evacuate and the rate was highly consistent: 68.1% in October 2011 and 67.2% in March 2012.

Across the two survey periods, about 23% expected they would defend their property throughout the fire, and about 6% expected to leave as soon as they knew there was a fire threatening their town or suburb. Less than 1% would not be at home because they would leave their property on days of extreme and catastrophic fire danger. Less than 2% ticked the ‘other’ box—these were all volunteer firefighters who would be out fighting any fire.

The most important finding was that decision difficulty as measured by the relative attractiveness of defending or evacuating was the only significant predictor of why people delayed deciding on their action in response to a fire threat.

“If defending held significantly higher perceived value to the householder than evacuating, then they were more likely to anticipate defending,” Dr McNeill said.

“Our study showed that householders who delay their decision are not avoiding the reality of bushfire threat. It is the extreme difficulty of making the decision itself—whether to defend or evacuate—that causes their paralysing indecision.”

End users of the research
Damien Killalea is Director of Community Fire Safety at the Tasmania Fire Service and the study’s lead end user. “I see this research as valuable to agencies that are responsible for minimising risk to people in bushfire prone areas because it offers more detailed insights than we’ve had before into the reasons why residents are not making decisions,” he said.

“It’s going to help us to reshape our messages in order to reach this large group who are failing to respond appropriately when bushfires threaten,” Mr Killalea said.

He saw the research results as potentially applicable Australia-wide, and possibly even for other natural disaster scenarios where decision delay might cause risk to safety, such as floods.

The researchers concluded that the most important solution to decision delay was to have brigades advise residents on how to identify appropriate decision triggers and therefore appropriate actions to take under a variety of conditions.

The appropriate actions would vary according to the intensity of the fire and the time until impact, he said. “However, all fire agencies in Australia urge people to leave their homes if there is a fire burning in the vicinity and the conditions are catastrophic.”

Mr Killalea could envisage the research findings being incorporated into a kit for householders to help them identify triggers, the appropriate actions to take and to avoid decision delay. “It could be quite helpful in our efforts to have people in bushfire-prone areas make a decision about what to do ahead of time.

“It will encourage them to identify a trigger, a tipping point for action—because the research is telling us that most people don’t do that until it’s way too late.”