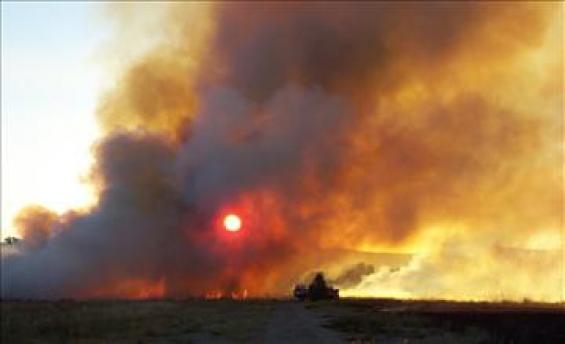 Columns of super-dry air that reach the earth’s surface from high altitudes could be responsible for extreme fire behaviour in some of the worst bushfires in Australia’s history.

In work undertaken through the Bushfire Cooperative Research Centre, Dr Graham Mills, from the Bureau of Meteorology, has found that under certain conditions columns of dry, fast moving, high-altitude air descend, causing a rapid loss of humidity at ground level and very strong gusty winds. If positioned over a bushfire, this phenomena can cause it to erupt.

These “dry slots” are a relatively common occurrence near jet-stream level, where jet aircraft fly, but need some link to reach the surface. This link is often provided by just the conditions that already create extreme fire danger.

Mills looked closely at satellite images of the bushfires in Canberra on 18 January 2003.

On that day a cold front was pushing across southeastern Australia towards the hot air masses and gusty winds already fanning the going fires. Columns of hot air were rising up to 6km to mix with the drier air aloft. The strong vertical mixing then brought the much drier and fast moving air rapidly to the surface.

“If there is a going fire, then the dry slot is potentially one of the triggers to set the fire going uncontrollably. Suddenly, the fuel is drying out more quickly, the wind is stronger and gustier, and the fire can take off explosively,” Mills said.

The research also links the dry slot phenomena with three other major fire events: the South Australian Eyre Peninsula fire in January 2005; the day of the lightning ignitions in Victoria and NSW on 8 January 2003 that lead to the prolonged alpine fires; and, the early 2006 fires on the central NSW coast.

Mills said the research is now being developed as a basis for a forecasting tool for fire authorities. “You have got several hours of warning if you can see one of these things moving towards a fire. When a dry slot moves closer, we can give the fire agencies some warning that the fire behaviour may soon become more explosive.”

He said the forecasting tool is not only useful for extreme events like the summer alpine fires of 2003 but also for smaller bushfires and for hazard reduction burns.

"Beware the dry air aloft" has long been the mantra of experienced fire managers but little was understood about its behaviour and origins.

"We didn't really know where it was except that it was up there somewhere. Now we know exactly where it comes from and what sort of explosive impact it can have on a bushfire."