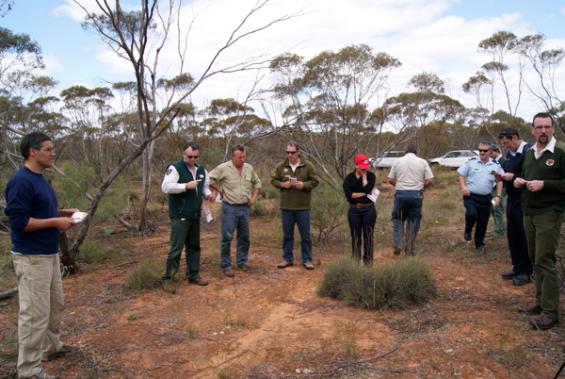 On a warm, cloudless October afternoon, a dozen firefighters and park rangers from distant parts of Victoria and New South Wales wander about a thick area of mallee scrubland south of Mildura, waving small, plastic-coated fold-out guides to the flora of the area while uttering what to the uninitiated might sound like the coded mantras of a secret society.

Leading them is Dr Miguel Cruz, a scientist with the CSIRO’s Bushfire Dynamics and Applications group in Canberra and a Bushfire CRC researcher.

During four years of research for the Bushfire CRC, Dr Cruz studied fire behaviour in the semi-arid mallee-heath areas of this general part of Australia, particularly in the Ngarkat Conservation Park, South Australia. The field trip he is leading is the practical culmination of that research, demonstrating his Quick guide for fire behaviour prediction in semi-arid mallee-heath, published just weeks earlier.

“The program was funded by the Bushfire CRC,” Dr Cruz tells the assembled participants in what is the third such one-day event in a fortnight – he conducted the earlier ones in Adelaide and Berri in South Australia. “Our [CSIRO] group looks at bushfire behaviour and pretty much everyone in our group was involved in this research. The main objective was to produce a prescribed burn guide that could be used to predict whether a controlled burn will ‘go’ under varying conditions, such as the height of the vegetation, the fuel moisture, the time of the day and the rate of spread of the fire.”

Mallee are eucalypts that sprout stunted multiple stems from an underground tuber, in contrast to the more common eucalypt trees that grow tall and proud with a single trunk. Mallee are found particularly in the region where the borders of South Australia, New South Wales and Victoria meet but also in other arid parts of Australia that have a reliable winter rainfall.

Fire behaviour in the sparse mallee lands is different to that in forests and grasslands, creating a problem in deciding the best conditions for controlled burns that will get under way productively but not go out of control.

In conjunction with South Australia’s Department of Environment and Natural Resources, a team led by Dr Cruz conducted 67 separate test burns in Ngarkat Conservation Park. The burns were at different times of the year over several years, in many types of vegetation, from mallee shrubs to pure heath.

The research found that the moisture content of the fuels to be burned was very important. Moisture increased at night then reduced during the day, with its lowest about noon.

The guide includes tables allowing fire managers to calculate the fuel moisture content by marking on a chart the date and location of the planned burn, the time of day, whether it was sunny or cloudy, and the relative humidity and air temperature.

This information was designed to be used in conjunction with the Quick Guide, with its four-step tables allowing ready calculation in the field of the probability of a controlled burn working properly.

The firefighters and rangers at this day’s session are from as far away as Cobar and Broken Hill, Sydney and Ballarat, as well as officers from around Mildura itself. They keenly engage with Dr Cruz, asking many questions.

One, quite unexpected, is: “Could the research you’ve done been turned into a mallee fire danger index? The existing forest and grass fire danger indices don’t work well in our conditions.”

Dr Cruz’s brow wrinkles for a few moments as he ponders this. “Hmm. The study focused on a prescribed burning guide, but it could be turned into a fire danger index, yes.” He adds it might not take very long to develop such an index.

“That could save us six years of research then,” says the happy questioner, who is even more pleased when Dr Cruz says the work could likely also be used to predict the spread of a wild fire in mallee countryside.

The group walk from one spot to another in the scrub, using their guides to make calculations from the quantity and height of the trees at different places. Though this day is fine and hot, there is little wind, and wind is needed to get flames to propagate through the sparse vegetation. And there has been more than 40mm of rain in the past few days. In fact, the rainfall in recent months has been the best in a decade and the region is positively blooming. Despite the day’s warmth, some water still lies in shallow puddles from the weekend falls.

The fire managers conduct some more chanting and mantras, gazing at the sun, measuring the temperature and humidity with hand-held devices, scrawling some more calculations down from the guide.

“Not a hope!” is the consensus reply.